John Doolittle
|
Posted: Oct 29, 2019 12:01 AM
Share   Tweet
The opinions expressed by columnists are their own and do not necessarily represent the views of Townhall.com. 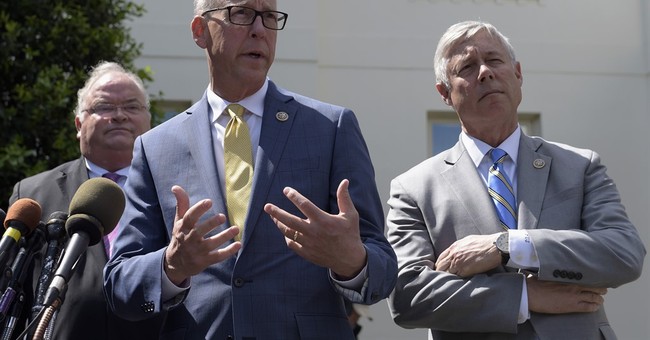 Congress is on the cusp of a legislative breakthrough that could provide relief for the millions of Americans suffering under the burden of absurdly high drug costs. Without a doubt, such a change would be a monumental bipartisan achievement. The best part? It’s only one bill away from reality.

On October 18, 2019, the House Energy and Commerce Committee convened for a 10-hour-long markup session for H.R. 3, the Lower Drug Costs Now Act of 2019. As its name suggests, the bill seeks to reduce both the price and cost of prescription drugs—a crucial goal to be sure. According to the National Health Expenditure data, total spending on prescription drugs rose 41 percent over the last decade. The bill, which is estimated to save $345 billion in Medicare spending, did manage to pass Committee by a vote of 30-22. And while the legislation’s passage does bode well, with the addition of one noble policy aim, the Lower Drug Costs Now Act could do so much more. Thanks to the leadership of a bipartisan coalition in Congress, that key addition now appears to be just around the corner.

Within the hearing, Rep. David McKinley (R-W.Va.) received assurances from committee leaders Frank Pallone Jr. (D-N.J.) and Greg Walden (R-Ore.) that they would work to ensure that language he and Rep. Annie Kuster (D-N.H.) pushed via amendment ultimately gets into the final House bill. Their objective is to ensure seniors on Medicare Part D finally receive the right to take price into consideration when shopping between generic drugs and their brand-name counterparts.

That right might sound like an obvious thing for seniors to have. After all, generics are the cheaper, alternative versions to brand-name pharmaceuticals that have done wonders to mitigate the price of drugs. In fact, generic drugs and biosimilars have saved patients an estimated $2 trillion in drug costs over the last decade alone. Of course, it would make sense for Medicare Part D to take their lower price into account. But under the current system the lower costs of generics and biosimilars are not taken into account.

First, it would require that generics and biosimilars be included within Medicare Part D’s formularies immediately upon launch. This change is essential, because it prevents well-positioned pharmaceutical companies from lobbying or entering into exclusionary contracts to stop generics from being introduced into Part D. That way, generics face fewer barriers to entry and can more easily join the marketplace, driving prices down.

Second, it would ensure that gone are the days when lower-cost generic drugs are placed on higher-cost, brand-name drug tiers. By preventing consumers from reaping the cost-savings, this practice has prioritized the bottom lines of crony manufacturers at the expense of America’s seniors. This unacceptable practice has led to a $22 billion increase in out-of-pocket costs for seniors. The McKinley-Kuster plan would do away with it for good by ensuring that generics are only placed on generic tiers and that brand-name drugs only go on brand-name tiers.

Lastly, the plan would create a separate drug tier for specialty generics and biosimilars that could be accessed at a reduced cost. This change further differentiates the selection process between generics and brand-name products as well as reduces expenses for patients with limited resources.

These three policy changes embodied in the plan have the potential to provide substantial relief from the ever-increasing cost of pharmaceuticals. It is the definition of commonsense, pro-consumer policy, and the McKinley-Kuster team deserves praise for pushing them this far into the House’s legislative process.

Now that they have received assurances from House committee leaders Frank Pallone and Greg Walden that they will help get them into the final bill, it seems to be all but inevitable that American seniors will finally receive the relief they need. After all, just weeks ago, Senate Finance Committee chairman Chuck Grassley (R-Iowa) also promised Sen. James Lankford (R-Okla.) that he will work to advance the plan, which Sens. John Cornyn (R-Texas), Robert Menendez (D-N.J.), Steve Daines (R-Mont.), and Ben Cardin (D-Md.)have pushed as well, on the Senate side. Everyone is on the same page, and consumers benefit from it.

In this divided environment, it is encouraging to see Republicans and Democrats – from Donald Trump to Nancy Pelosi and everyone in between - working so well together to achieve results on something so important to their constituents. Now, they just need to finish the job.

John T. Doolittle, a freelance author, served as a Republican Member of Congress for California’s Fourth Congressional District from 1991-2009