Hate on the Left

John C. Goodman
|
Posted: Aug 19, 2017 12:01 AM
Share   Tweet
The opinions expressed by columnists are their own and do not necessarily represent the views of Townhall.com. 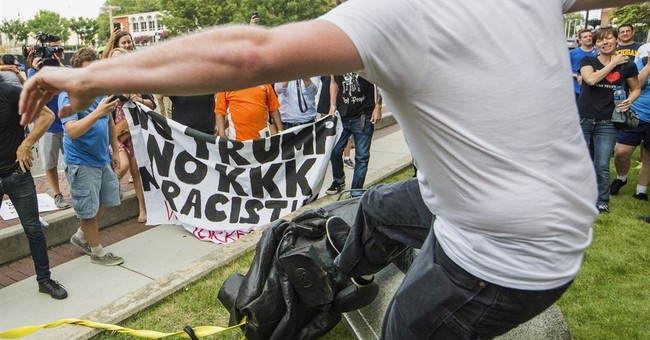 The video that appeared more often than any other on my TV screen this past week showed protestors toppling a statue of a confederate soldier in Durham, North Carolina. Then kicking it, stomping on it, spitting at it.

The Workers World Party is the group that pulled off this feat and they were also involved in the violent conflict in Charlottesville.

So, who are they? You didn’t learn much about them if you watched CNN or even Fox News. The commentators on the regular cable channels were too focused on racists and white nationalists and why Donald Trump wasn’t condemning them enough. So, I turned to Google instead.

Wikipedia descries the WWP as a communist party. But they are not garden variety communists. Its website makes clear that these folks admire North Korea and its mentally-deranged dictator, Kim Jong Un. They even defend Jong Un’s efforts to develop the nuclear weapons that currently threaten every innocent person who happens to be on Guam.

Although the WWP describes itself as a party that supports “the struggles of all oppressed peoples," you won’t find any country in the whole world where people have been more systematically oppressed than North Korea. A UN report estimates that 18 million North Koreans go to bed hungry every night, including 1.3 million children under the age of five.

While his fellow countrymen were starving, Kim Jong Un managed to slip by international sanctions and import $2.09 billion in luxury goods from China between 2012 and 2014, according to The New York Times. The items included Mercedes-Benz S-Class cars and a luxury yacht worth as much as $6 million. More recently, he imported the materials needed to construct a world class ski resort. As far as anyone can tell, the only skier who uses it is Kim Jong Un himself.

This case is not unusual. Over the past 100 years the most oppressive ideology in the world has been communism. While the people who lived under it were starved, tortured and murdered, its leaders lived in luxury. The suppression of ordinary people by their communist rulers far surpasses anything capitalist employers were ever accused of doing. While condemning exploitation, communist dictators turned out to be masters at it.

Fidel Castro’s former bodyguard Juan Reinaldo Sánchez says that the communist leader “lived like a king” and “ran country like a cross between medieval overlord and Louis XV.” While ordinary Cubans stood in breadlines and suffered the effects of a declining economy, Castro had his own private yacht and his own private island -- a luxurious Caribbean getaway, complete with dolphins and a turtle farm. In Havana, he lived in an immense estate with a rooftop bowling alley, a basketball court and fully-equipped medical center.

According to Hong Kong-based historian, Frank Dikötter, Chinese communist leader Mao Tse-tung was the greatest mass murderer in world history. “At least 45 million people were worked, starved or beaten to death,” he writes. “It was like [the Cambodian communist dictator] Pol Pot's genocide multiplied 20 times over."

Despite his populist pretensions, Mao lived like a traditional emperor with all the material comforts that China could afford. His physical needs were taken care of by attendants recruited from young, uneducated peasants, who bathed and clothed him and combed his hair …. [He] indulged in young women--sometimes more than one at the same time -- and … even had a special bed made for his sexual activity…

The world’s second greatest mass murderer, Josef Stalin, killed 20 million, many by forced starvation. Stalin himself had no fear of starvation, however. Upon his death, he was worth an estimated$75 million.

On his death, Mao Tse-tung was worth an estimated $1 billion. Mao’s granddaughter has been named to China’s rich list, with a fortune of nearly £530 million.

During the reign of avowed Marxist Hugo Chavez, Venezuela drowned in a sea of corruption involving “some of the most senior figures in Mr. Chávez’s “Bolivarian revolution,’” according to The Economist. The country was ranked as the eighth most graft-ridden county in the world. Even places like Haiti and Zimbabwe ranked higher.

Although Chavez is now dead, the country has continued its decline into dictatorship under the rule of Nicolas Maduro. Yet while ordinary people face food shortages, skyrocketing inflation and abject poverty, Chavez’s daughter, María Gabriela Chávez, has bank accounts in the U.S. and Andorra withassets totaling nearly $4.2 billion – making her the richest individual in the country.

R.J. Rummel estimates that almost 170 million people were killed in the 20th century by their own governments. These are not deaths in war. They are the victims of genocide by the governments in the countries where they lived.

Almost all American billionaires are philanthropists. At last count, 141 of them have pledged to give half their wealth away. Warren Buffett is giving 95% away. Bill Gates is giving 99%.

You will find very little charity where leftists are in power.