A Tale of Two Cities: Lessons from Michigan

John C. Goodman
|
Posted: Jan 23, 2016 9:56 AM
Share   Tweet
The opinions expressed by columnists are their own and do not necessarily represent the views of Townhall.com. 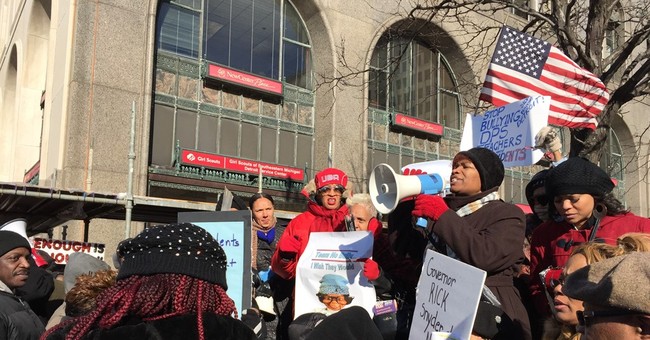 Two Michigan cities made the front page of The New York Times on Thursday. One concerned contaminated water in Flint, leading to lead poisoning in children.  The other exposed the sorry state of the public schools in Detroit, where student test scores are abysmal, the buildings are filthy and teachers are engaged in an illegal strike.

If you care about children, especially minority children, both stories should generate outrage. Yet the article about Detroit schools seems to have been a one day story – quickly forgotten by just about everybody. The Flint water contamination story, however, seems to linger, inviting comment by just about everyone who is politically left of center.

“I know that if I was a parent up there, I would be beside myself that my kids’ health could be at risk,” said President Obama.

“If Flint were rich and mostly white, would Michigan’s state government have responded more quickly and aggressively to complaints about its lead-polluted water?” asked a front page article in the Times the next day – sounding more like editorial than a news story.

Then, back on the page where editorials are normally found in the paper, the Times editorial board accused the governor of Michigan of “cynical,” “callous” and even “depraved”  “indifference to the plight of the mostly black, poverty-stricken residents of Flint.”

Whereas “environmental racism” was merely a question on page 1, it becomes a matter of fact by the time the editors weigh in on page 22, including this gem:

There is little doubt that an affluent, predominantly white community — say Grosse Pointe or Bloomfield Hills — would never face such a public health catastrophe, and if it had, the state government would have rushed in to help.

Hmmm. Given all this consternation you might suppose that lead poisoning levels in Flint are exceptionally bad, compared to the rest of the country. In fact, lead poisoning seem to be pervasive in America. In Flint, 4 percent of the children tested positive for lead poisoning. But nine counties nationwide told the CDC that 10 percent or more of their lead poisoning tests came back positive. Houston (but with a very limited sample) reports a rate of 58.3 percent. And nationwide, black children are twice as likely as whites to test positive.

So why isn’t the nationwide problem of lead poisoning of concern to Hillary Clinton? Or to Barack Obama? Or to The New York Times?

There is something else that is puzzling here.

What about the school children in Detroit, whose plight is so horrendous that they too warranted front page attention? Why is one set of children to be mourned while the other is ignored? This is what The New York Times tells us about schools in Detroit:

In Kathy Aaron’s decrepit public school, the heat fills the air with a moldy, rancid odor. Cockroaches, some three inches long, scuttle about until they are squashed by a student who volunteers for the task. Water drips from a leaky roof onto the gymnasium floor.

“We have rodents out in the middle of the day,” said Ms. Aaron, a teacher of 18 years. “Like they’re coming to class.”

Academic achievement is described as “alarming”:

Among big-city school districts, Detroit has come in last every year since 2012, according to the National Assessment of Educational Progress exam. Only 27 percent of fourth graders are proficient in reading; 36 percent are proficient in math.

Why doesn’t this constitute “educational racism”? Why doesn’t it reflect cynical, callous, depraved indifference to minority public school students? Why aren’t Hilary Clinton and The New York Times asking if such conditions would ever be allowed in a rich white suburb?

The answers to all these questions are the key to understanding politics in America in the 21st century.

Crass political opportunism. Leadership consists of identifying problems in order to help us find a solution. Opportunism consists of pointing to problems in order to take political advantage of them. There are environment problems affecting children all over the country. There are also failing schools all over the country. But in the vast majority of cases the politicians in power are Democrats.

Flint, like Detroit, is effectively bankrupt and in both cities an emergency manager (a sort of receivership) is in charge. But with respect to Flint’s water supply and the decisions that led up to the current crisis, an argument can be made that the fault lies with  the administration of Governor Rick Snyder and he is (you guessed it) a Republican.

What makes Flint different from every other city in the country with the worst environmental and educational problems is that Democrats can blame Republicans.

What makes Detroit different from Flint is that Democrats can’t blame the governor for its falling schools.

Race baiting. There have been numerous studies trying to establish that Republican voting success, especially in the South, is dues to subtle racist messages. These include Ronald Reagan’s reference to “welfare queens” and George H.W. Bush’s use of Willie Horton TV ads (even though the ad was originated by Al Gore).

But when it comes to race baiting on the Democratic side there is no need for any study, because there has never been any subtlety. None at all. James Byrd was a black man who was beaten, chained, and dragged 3 miles to his death behind a pickup truck. On the eve of the 2000 election, an NAACP TV ad, narrated by Byrd’s daughter, suggested that then Republican presidential candidate Bush was indifferent to this crime.

What is new in the modern era is that Democratic politicians and candidates themselves are overtly doing what in the past they would have been embarrassed to do and what they depended on the NAACP and similar fringe organizations to do.

What I mean by race baiting is stirring up racial passions for no reason other than motivate people to go to the polls and vote for a particular candidate or party.

Using crises to promote an ideological agenda. President Obama says that the experience in Flint illustrates why we need government regulation of the private sector. But as a Wall Street Journal editorial makes clear, there is no private sector involvement in Flint. If there were, they would probably be in jail. All the regulating that is going on involves government agencies regulating other government agencies. The EPA, for example, knew about the problems in Flint for almost a year and did nothing. Instead of trying to figure out how regulation is going wrong, Obama’s instinctive reaction is to use the crises to defend regulation as such.

Eventually the Shark fest kills the whale. As the Wall Street Journal points out, the problems in Flint represent government failure, not market failure. And special interest politics make government failure more likely. At its base Democratic politics tend to be very unprincipled politics. It’s all about taking from Peter to give to Paul and anybody could be Peter or Paul. As I wrote in When the Last Republican Leaves:

There are places where there aren’t any Republicans – or at least there are very few. And I’ve noticed that one of two things happens. Fearful of how bad things might get, voters in some Democratic cities vote for Republicans anyway. That is, they elect mayors who either are Republicans or at least govern like Republicans.

This has been the pattern in New York City for the past 40 years (up until the last election) and in almost all cases the mayor the city elected had the endorsement of the Gray Lady herself. There are other examples. When Republican Bret Schundler was elected mayor of Jersey City there probably weren’t more than five Republicans registered to vote there. Chicago has always had mayors who govern like Republicans.

But there are other times and places where this doesn’t happen. In these cases, Democrats elect mayors and city council members who think just like they think.