John and Andy Schlafly
|
Posted: Feb 28, 2018 12:01 AM
Share   Tweet
The opinions expressed by columnists are their own and do not necessarily represent the views of Townhall.com. 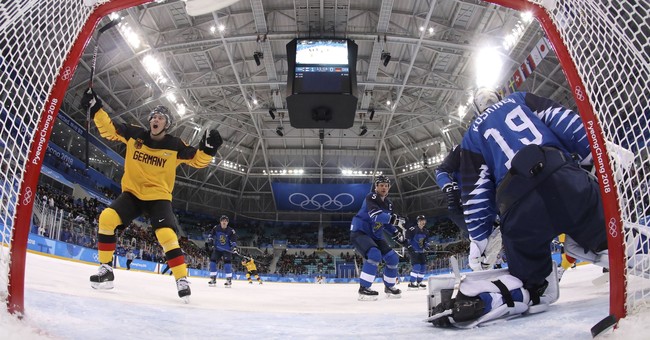 After the poor showing by the U.S. men’s hockey team at the Winter Olympics, it was inspiring that the Marjory Stoneman Douglas boys’ hockey team captured the state championship on Sunday and will represent Florida at the national championship next month. The sister of one of the team’s hockey players was among the recent shooting victims at the high school in Parkland, Florida.

Boys’ hockey is thriving at the high school level, and this remarkable victory by the Marjory Stoneman Douglas team brings welcome relief amid the tragedy.  Medals from this championship team were added to the memorial site of the shooting victims.

But boys’ hockey stars will find limited opportunities to play when they get to college.  There are only a few dozen competitive college men’s hockey teams, not enough to develop the talent needed to compete with the rest of the world.

As a result, a ragtag team of Russians humiliated the U.S. men’s hockey team with a 4-0 drubbing in Pyeongchang, South Korea.  The American team fared slightly better for its final game prior to its elimination in an overtime shootout against Slovenia, but NBC failed even to broadcast that exciting finish.

When the U.S. women’s hockey team won the gold in a victory against Canada, there was national excitement but not quite the level that occurred when our men’s hockey players defeated the Soviet Union at Lake Placid in 1980.  Men’s hockey is far more popular than women’s hockey, for both men and women spectators.

Unfortunately, federal regulators who implement Title IX against college sports refuse to recognize this fundamental difference between men’s and women’s sports.  Regulators require colleges to provide more athletic opportunities for women than for men, simply because there are now more women than men attending college.

Under the so-called proportionality test, which ignores the greater interest in men’s sports than in women’s, colleges have eliminated hundreds of men’s sports teams, many in Olympic sports.  This hurts our national competitiveness and induces many young men to opt out of going to college where they are prevented from competing in the sport they love.

The Title IX regulators’ quota that limits men’s sports to their proportional enrollment in the college is senseless and not part of the law that Congress enacted in 1972.  It’s based on a regulatory interpretation first imposed by President Jimmy Carter to appease the feminists, and President Trump could repeal it along with the many others he has been properly rescinding.

Many colleges have been unjustly sued when they do not comply with the feminists’ distorted view of Title IX.  To avoid costly litigation, colleges have repeatedly eliminated men’s sports programs while adding women’s programs that they then have difficulty filling.

The Title IX regulations created a vicious cycle, discouraging men from matriculating to colleges that eliminated their sport.  In 1980, equal numbers of men and women obtained college degrees, but now nearly 60 percent of college degrees are awarded to women and only 40 percent to men.

The hockey competition won by the Marjory Stoneman Douglas team in the Sunshine State of Florida illustrates how much boys’ hockey has grown in popularity.  Colleges, however, are generally forbidden from having more sports teams for men than women, so if there is not enough interest in women’s hockey or another large team sport for women, the college is not likely to start a men’s hockey team.

In the traditional Olympic events of alpine and cross-country skiing, the United States men won a grand total of zero medals.  Today there are more college women’s ski teams than there are men’s, perhaps again due to the impact of the proportionality test under Title IX.

Olympic sports themselves have been emasculated by the International Olympic Committee (IOC), which even tried to eliminate men’s wrestling from the 2020 Olympics.  The IOC reinstated wrestling after an uproar but cut 56 positions, replacing them with events that “include more women” in the summer games.

Downplaying the overall nosedive in interest in the Olympics, some commentators say this is merely part of a more general trend.  But the decline in viewership of football, still as masculine as ever, has been small compared with the bottom falling out for the Olympics.

When Phyllis Schlafly spoke for her last time at Harvard, she was greeted afterwards by Professor Harvey Mansfield, author of a book entitled “Manliness.”  If NBC executives hope to recoup the billions they invested in exclusive rights for the Olympics then they might pick up a copy, and the Title IX regulators would also benefit from recognizing the greater demand for men’s sports.