Netanyahu Risks All To Address Congress, Sees the Threat of “Apocalyptic Islam” 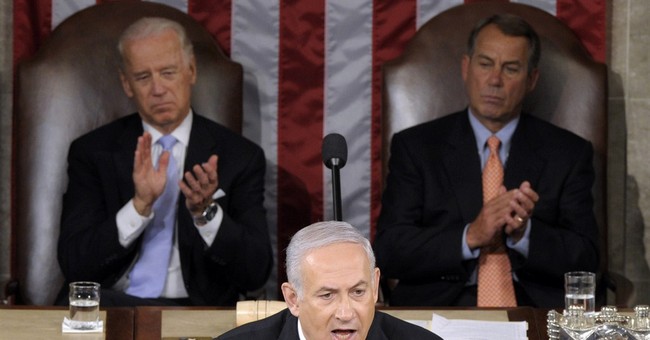 Why does Israeli Prime Minister Benjamin Netanyahu want to address a Joint Session of Congress despite intense – even unprecedented -- political attacks against him from the Obama administration, the media, and the left-wing in Israel?

Because he understands something too few in the West do – that the most serious threat we face today is not simply from “Radical Islam,” but from “Apocalyptic Islam.”

“I think the West misunderstood, and still misunderstands, the threat” posed by Iran, Mr. Netanyahu told me during a 2007 interview for a documentary film I was producing. “It is a fanatic, messianic ideology that seeks to have an apocalyptic battle for world supremacy with the West. It seeks to correct what it sees as an accident of history, where the West has risen, and Islam had declined. The correction is supposed to be done by the resurrection of an Islamic empire and the acquisition of nuclear weapons and the use of nuclear weapons, if necessary, to obliterate Islam’s enemies, and to subjugate the rest.”

“This is a pathological ideology, much like Naziism was,” Mr. Netanyahu, then out of office, continued. “It poses a threat, in my judgment, in many ways bigger than Naziism. Because Hitler embarked on a world conflict and then sought to achieve nuclear weapons, where as the leading Radical Islamic regime – Iran -- is seeking to first acquire nuclear weapons and then embark on a world conflict. And that is what is not yet understood in the West, and certainly, if it’s understood, it’s not acted upon.”

Today, for the first time in human history, the world faces not just one but two nation states whose rulers are driven by an apocalyptic, genocidal, End Times eschatology that seeks not simply to attack us but to annihilate us.

The first is the Islamic Republic of Iran. The second is Islamic State (also known as ISIS or ISIL). The leaders of the former are Shia. The latter are Sunni. Both believe the End of Days has come. Both believe the Islamic messiah – known as the “Mahdi” — is coming at any moment. Both are trying to hasten the coming of the Mahdi so that he can conquer the earth and establish justice and peace. They speak often of such things.

That said, each has a different strategy to speed up the Mahdi’s arrival. ISIS wants to build a caliphate. Iran wants to build The Bomb. ISIS is committing genocide now. Iran is preparing to commit genocide later, openly stating it seeks to wipe Israel off the map and create a world without the United States, which they describe as the “Great Satan.”

In the immediate term, ISIS is more dangerous, as journalist Graeme Wood explains in a must-read article inThe Atlantic. Why? Because ISIS is on a jihadist rampage right now – robbing, killing, destroying, enslaving, raping, torturing, beheading and burning people alive.

Longer term, Prime Minister Netanyahu argues that Iran is the most dangerous, especially if the President approves this disastrous nuclear deal. Why? Because the apocalyptic leaders of Iran are biding their time to build a nuclear arsenal capable of killing tens of millions of people in a matter of minutes. Thus, the Prime Minister will urge Congress to do everything in its Constitutional power to block ratification and implementation of treaty with Iran giving the mullahs a legal path to uranium enrichment, plutonium development, building ICBMs, and building nuclear warheads.

However, according to a 2012 report by the Pew Research Center, “in most countries in the Middle East and North Africa, South Asia and Southeast Asia, more than half or more of Muslims believe they will live to see the return of the Mahdi.” In a world of 1.5 billion Muslims, that means more than 750 million Muslims believe not only that the Mahdi is coming, but that his arrival is imminent.

What’s more, the Pew report found that an enormous number of Muslims believe that Jesus is literally coming back to earth. In Islamic eschatology, Jesus is not the Savior, nor the Son of God. Thus, Muslims do not believe Jesus will reign as the “King of kings and Lord of lords,” as prophesied in the Bible. Rather, Apocalyptic Islamic eschatology asserts that Jesus will come as a deputy, serving under the Mahdi, forcing people to convert to Islam or die.

In Jordan, 29% of Muslims believe Jesus is coming back to earth. In Egypt, the number is 39%. Among Palestinians, the number is 46%. In Iraq, a remarkable 64% of Muslims believe Jesus is coming back. Not all of these Muslims are dangerous, of course. But the leaders of Apocalyptic Islam are seeking to mobilize the masses who share their End Times theology towards violent, even genocidal, ends.

The President is ignoring such facts and their implications. The Prime Minister is not.

“The Obama presidency has two great missions: fixing the economy, and preventing Iran from gaining nuclear weapons,” Mr. Netanyahu told a reporter in March of 2009, upon coming back to power after a decade in the political wilderness. Speaking of the Iranian leadership, he said, “You don’t want a messianic apocalyptic cult controlling atomic bombs. When the wide-eyed believer gets hold of the reins of power and the weapons of mass death, then the entire world should start worrying, and that is what is happening in Iran.”

Mr. Netanyahu is still sounding the alarm. Mr. Obama is still refusing to listen. God help us all.