Swamp Creatures are Fleeing to the Democratic Party

Joe DiGenova
|
Posted: Aug 21, 2020 12:01 AM
Share   Tweet
The opinions expressed by columnists are their own and do not necessarily represent the views of Townhall.com. 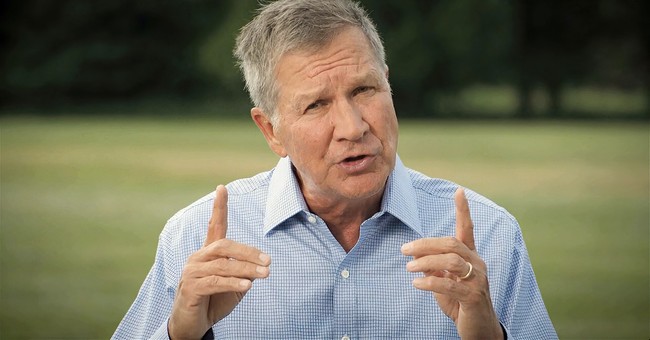 President Trump has clearly kept his pledge to “drain the swamp” in Washington, D.C. — desperate for a new home, former Republican swamp creatures are seeking refuge in the Democratic Party.

During the first night of the Democratic National Convention, four so-called “Republicans” publicly voiced their opposition to President Trump, abandoning the principles they once purported to believe in and fully embracing the Democratic Party ticket and its radical agenda.

One of them was former Ohio Governor John Kasich, who has never gotten over his humiliating repudiation by GOP voters in the 2016 presidential primaries and has spent the intervening years launching dirty smears against Donald Trump and his administration in a desperate bid for relevance, or at least attention. It hasn’t worked out especially well, so Kasich removed his GOP mask and went all-in for Biden, finally garnering him the headlines he’s been seeking.

“Joe Biden is a man for our times, times that call for all of us to take off our partisan hats and put our nation first for ourselves and, of course, for our children,” Kasich said at the convention, clearly reveling in the chance to claim the spotlight for a few moments.

Like other establishment politicians, Kasich was careful to stick to meaningless platitudes. But he’s obviously inexperienced when it comes to addressing lefties because his reference to putting our nation first undoubtedly drew groans from liberals all over the country who recognized it for what it was: a blatant ripoff of Donald Trump’s “America First” brand. The difference between Kasich and Trump is that whereas “America First” language is just something Kasich sprinkles into his speeches to give them a patriotic flavor, it’s the fundamental guiding principle behind President Trump’s entire administration.

Former New York Representative Susan Molinari was another swamp creature who traded principles for publicity by addressing the DNC.

“I’ve also gotten to know and work with Joe Biden on issues related to women that are so important to all of us — women in business, violence against women,” she said at the event.

Let’s start with the obvious — it's impossible to objectively discuss Biden’s record on women’s issues without first addressing his long history of disturbing behavior around women. It’s important to remember that the former vice president currently faces multiple accusations of sexual misconduct from women accusing him of touching them inappropriately. Some of these women are even committed Democrats with absolutely no partisan loyalties to the GOP.

"My brain couldn't process what was happening. I was embarrassed. I was shocked. I was confused," Lucy Flores, a Democratic politician from Nevada, wrote last year while recalling her terrifying encounter with predatory Biden. "The vice-president of the United States of America had just touched me in an intimate way reserved for close friends, family, or romantic partners — and I felt powerless to do anything about it.”

Neither Molinari nor any of the other “Republican” women put on display at the DNC — including former New Jersey Governor Christine Todd Whitman and former Hewlett-Packard CEO Meg Whitman — mentioned anything about the troubling accusations against Biden. Instead, the Whitmans chose to expend their credibility by indulging liberal fantasies, attacking the president’s strongest electoral attribute — his monumental record of economic accomplishments.

“This isn’t about [being] a Republican or a Democrat — it's about a person. A person decent enough, stable enough, strong enough, to get our economy back on track,” said Christine Todd Whitman, ignoring the fact that President Trump already engineered one historic economic recovery by elevating us from the torpor of the Obama-Biden years to the record-setting prosperity we achieved until the coronavirus pandemic emerged from China, and is currently in the process of making history again by presiding over the “V-shaped” post-pandemic rebound.

Just last month our country added a whopping 1.8 million jobs, exceeding expectations for the third straight month. And since May, the U.S. economy has managed to regain more than 9 million jobs — the fastest rate of sustained job creation in American history.

Meg Whitman made a similarly ludicrous accusation, claiming that Donald Trump “has no clue” how to run the U.S. economy, yet Joe Biden does. As a successful businesswoman, Whitman is certainly aware that Biden’s big-government agenda of massive tax hikes and overbearing regulations would strangle our nascent economic recovery in its cradle. As a reasonably well-informed American citizen, she is certainly aware that our country’s experience over the past 20 years directly contradicts her thesis. As a swamp creature, she has no compunctions about ignoring all of that and saying whatever she thinks her audience wants to hear.

President Trump has clearly kept his word — swamp creatures are abandoning the GOP en masse and flocking to the Democratic Party. Now, the American people can finally see these so-called “Republicans” for what they truly are — sleazy political opportunists willing to say and do anything to advance their own interests.

Joseph diGenova was US Attorney for the District of Columbia and an Independent Counsel. He is the founding partner of diGenova & Toensing, LLP.