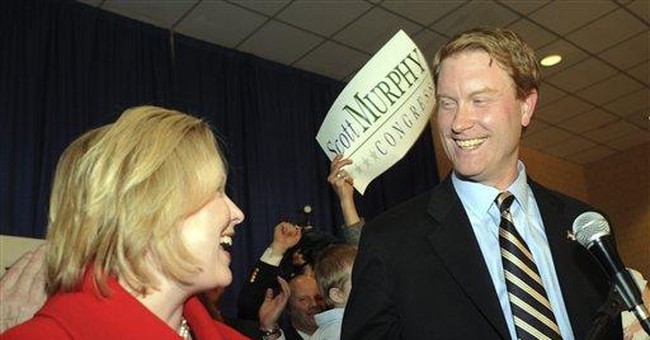 The showdown election between Democrat Scott Murphy and Republican Jim Tedisco for the NY-20 special election made waves in both upstate New York and across the nation for Murphy’s 401-vote win. His re-election challenge this November promises to be just as exciting.

Murphy is yet another vulnerable Democrat who caved to President Obama’s demands and voted “yes” on the health care bill despite his constituents’ opposition. He is one of the 37 Democrats who originally voted “no” and then switched after Obama and Pelosi turned up the heat.

“The president and I had a very good conversation about the ways that this bill is trying to keep health insurance costs down for small business and for families,” Murphy told the local Post Star in a post health-care interview. "We talked about Medicare waste and fraud... I think that this bill does an awful lot on the Medicare waste and fraud. I don't think it does everything.”

That might be a tough sell to the well-entrenched medical industry in upstate New York. Four of the ten biggest businesses in the area deal with health care, and Geeorge W. Bush won the district by 7 and 8 points, but Obama beat McCain by 3 points in 2008. NY-20 is a solidly Republican region, yet elected Democrat Kristen Gillibrand by 24 points in 2008. Gillibrand’s opponent, Republican Sandy Treadwell, was plagued by scandals.

That’s not the case with this November’s likely Republican challenger, Chris Gibson.

“Right now, the emotion, the disappointment, is palpable,” said Gibson. “I’ve had enough. I’ve fed up. This is a cause... I’m not seeking a job, as much as I’m trying to work for a cause.”

Gibson is a 24 year Army veteran – just weeks before he started campaigning, he was commander of a combat team in the 82nd Airborne Division’s humanitarian relief efforts in Haiti. That was one of seven deployments he has completed, including four tours to Iraq. He held the rank of Colonel before his retirement.

NY-20 is an expensive district, but Gibson has made an impressive showing out of the gate, reporting $108,000 in donations. That’s a far cry from his challengers’ haul; Murphy has brought in $475,000, much of that coming after Murphy’s “yes” health care vote.

But Murphy has a target on his back from the National Republican Campaign Committee and from nationwide conservatives, who decried his eleventh-hour switch on the health care bill for no apparent reason at all. Gibson believes that this will tip the balance in his favor.

“We’re going to win a respectable amount to campaign on the ground, reaching down into the towns and cities,” he said. “I believe in a core set of fundamental Republican values. I believe that the strength in America is individual families and communities.”