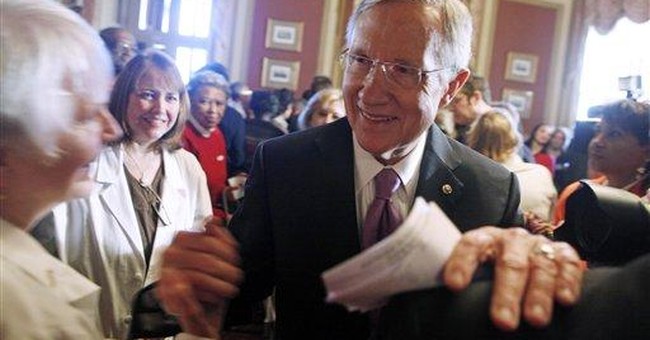 In addition to supporting federal subsidies of Viagra for child molesters, Reid, Boxer, and the rest of the Democratic caucus also supported taxes on prosthetics for wounded veterans, childrens' orthopedic devices, and an exemption for senior leadership staff from being forced to purchase health insurance from health insurance exchanges, like Members of Congress must do. To Democrats, these things are all simply part of the price of imposing Obamacare on America.

Republicans were able to force votes on all of these issues through a fun Senate procedure called vote-o-rama. Amendments are normally required to go through a time-consuming consideration process where they are likely to be thrown out. But during vote-o-rama — which was part of the Senate reconciliation proceedings that Democrats undertook last night — any Senator is allowed unlimited time to file amendments, and thus register complaints, about the legislation being considered.

Republicans used vote-o-rama to bring up contentious issues in the health care bill. Sen. Tom Coburn, (R-Okla.), the sponsor of the Viagra amendment, highlighted the tax savings associated with his proposal rather than the glaring principle of subsidizing prescription sex-enhancement medication for child rapists.

"This amendment would save taxpayers tens of millions of dollars a year by preventing payments for fraudulent prescriptions by Medicaid and prohibiting coverage of unnecessary drugs — such as RU-486 and other abortion drugs, as well as Viagra and other erectile dysfunction drugs for those convicted of rape, child molestation and sexual assault — in the new health care exchanges," said Coburn in a statement.

Sen. Max Baucus, (D-Mont.), chairman of the Finance Committee, told the New York Times that Coburn's amendment was a "crass political stunt aimed at making 30-second commercials, not public policy." But the very fact that the amendment was germane raises serious questions about the potential problems with Obamacare.

Sen. Orrin Hatch (R-Utah) was the sponsor of the amendment that would have protected veterans from punitive tax hikes in the health bill.

"Of the few exemptions included in the reconciliation bill, there is no mention of the brave men and women in the military and our veterans who sustained injuries defending this country," he said in a release. "My amendment would prevent this new tax from raising costs or hurting access for American soldiers and veterans."

Then there was the amendment by Sen. James Inhofe (R-Okla.) exclude pediatric devices from the medical device tax. Children frequently require devices to be replaced more frequently because they are growing, and taxing them is likely to impose hardship.

Senate Minority Leader Mitch McConnell had confirmed on Monday that Tuesday night's votes were designed to make Democratic Senators take the hardest votes of their life.

“What we intend to talk about are the things upon which there is not broad agreement: the massive Medicare cuts, the massive tax increases, made even more dramatic in this bill that they want to try to pass here in the Senate this week,” said McConnell.

Sen. John Thune was also enthusiastic about the votes taken Tuesday when speaking to reporters on Tuesday afternoon.

“Our amendments strike at the very core of all the promises they have made and that have been broken,” said Thune.