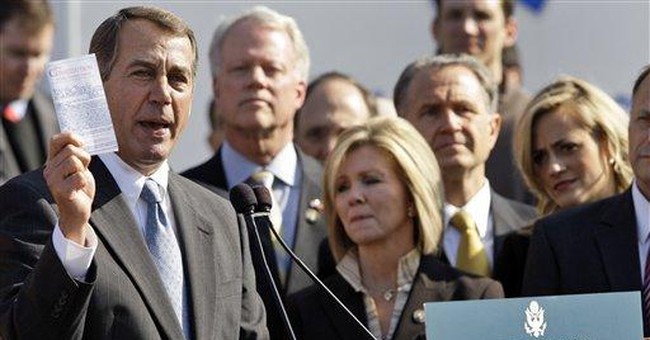 Heading into the 2010 mid-term elections, House Republicans want to re-focus their efforts towards providing solutions to failed Democratic policies. House Minority Leader John Boehner (R-Ohio), has said that could include a new version of the the 1994 “Contract with America,” which led to Republican electoral success in all levels of government.

Their timing couldn’t be better: a new poll released yesterday showed that a full 50 percent of American voters wouldn’t re-elect Obama if another election was held right now. That poll, conducted by Allstate and National Journal, also found “growing dissatisfaction among Americans regarding the state of the country,” and that a strong plurality thought America was on the wrong track.

That means it’s time to seize the moment. Boehner said the new "contract" or "agenda" would "involve members of the conference and our candidates," meaning that it could be a sort of litmus test for all House GOPers during the mid-terms. It would likely include agenda items such as lowering taxes and decreasing deficits, as well as addressing the issues of immigration and bailouts.

The House Republican Conference's annual retreat, which starts in two weeks, is expected to provide a forum for Republicans to talk about policy objectives - key during the last two years of President Obama’s first term.

“At our annual retreat, House Republicans will be working on solutions to fix the failed Democrat policies enacted over the last 12 months,” said Mary Vought, press secretary for the HRC.

Vought said that House Republican leaders chose Baltimore as the location for the retreat “because it is a working class city that has a 10.8 % unemployment rate.”

President Obama is slated to speak at the conference, and attendance is expected to be at record levels.

“As Americans in growing numbers are turning to House Republicans for solutions to our current crises, we expect another large gathering,” said Vought.

The Democrats held a parallel gathering this week, but didn’t “retreat” anywhere – their annual conference was held in the Capitol, during a series of meetings that focused on jobs. Reports said they were trying not to appear as though they were leaving on a retreat while the rest of America was hard at work.

About 170 out of the House’s 257 Democrats attended that meeting, where President Obama spoke along with former President Bill Clinton.

If the National Journal poll means anything, it’s that the Democrats have a lot of ground to cover. Solid majorities of Americans said the government needs to make government programs more effective while reducing wasteful spending, and that they wanted the government to force financial institutions to pay back bailout money. Democrats, meanwhile, contemplate a second stimulus and increased government programs, as opposed to improving existing ones.

That could help Republicans in 2010, especially those who failed to get elected in years prior. Politico reported that a half-dozen legislators who did not win election in 2006 and 2008 were contemplated a return to the ballot, or had already announced that they would do so. A reinvigorated policy effort, and perhaps even a revised Contract with America, could be just the ticket.