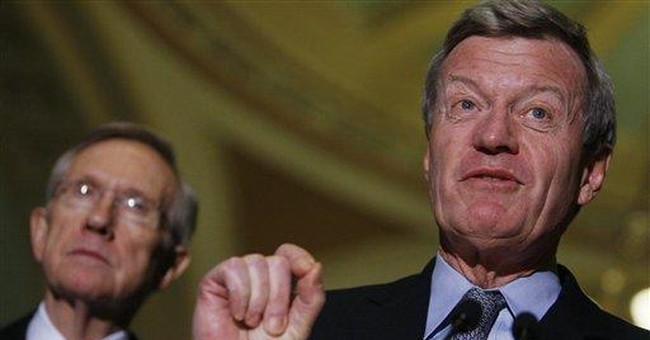 Personal doctors on call 24/7. Coverage that knows no caps. No exemptions for pre-existing conditions.

Those are the sorts of benefits members of Congress currently enjoy on the taxpayer’s dime, and the kinds of benefits Americans on a government-run public health care plan will never see if Obamacare passes.

“One thing is certain: Congress will exempt itself from whatever lousy health care system it forces on us little people,” said Michael Cannon, director of health policy studies at the Cato Institute. “Congress will get better insurance than you do because politicians always get a better deal under government-run health care.”

While it’s not news that Congressional health insurance plans are posh, CBS News recently uncovered the details of plans – right as the details of the Baucus health care bill are being hashed out.

Members of Congress can choose from five different plans, and have access to both the VIP Bethesda Naval Hospital and a reserved spot Ward 72 at Walter Reed Army Medical Center, an elite division usually reserved for military members. Their everyday medical concerns can be taken care of at a doctors office located inside of Congress.

Their premiums are the same as those of insurance plans with half the benefits, and the plans last a lifetime; not until Medicare kicks in do ex-Members or loose their Congressional health benefits. Congress has repeatedly voted down any provision that would switch their insurance plans to the lower-grade public option if Obamacare goes through.

Helen Evans, the director of Nurses for Reform, a campaign for more consumer-led, sustainable healthcare systems in Britain, said that this sort of elite care for the bureaucracy – and low-brow care for the plebes – is the same thing that happens in the government-run British health care system.

“Independent academic research has shown that on average the professional and managerial types obtain 40% more resource per illness episode than lower down the social spectrum” in Britain, she said.

Evans is certain that the exact same thing would happen in the U.S. if Obamacare was installed.

“The National Health Service, is famous for being a highly politicised bureaucracy that whilst it legitimises itself on the basis of equality favours the powerful, articulate and well connected,” she said. Nurses for Reform is unsurprised that American politicians are pushing for government-run health care “while of course attempting to secretly perpetuate their own elitist system funded by ordinary taxpayers.”

At least one U.S. Congressman is speaking out.

"If we pass a law that says a public option will be made available, I think people like myself should get out of this plan and go into the public option," Sen. Lindsey Graham, (R-S.C.), told CBS.