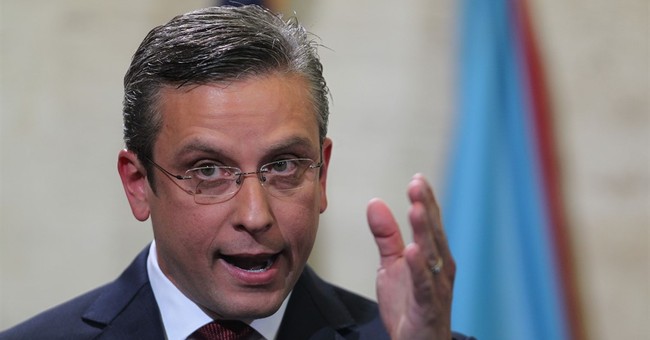 Puerto Rico’s massive welfare state and excessive spending has put it in an economic state worse than Greece. This small island has an enormous problem—$72 billion in bond debt and more than $50 billion in retiree obligations. What’s worse is that the Puerto Rican government doesn’t seem to be serious about reform. Pedro Pierluisi, the island’s nonvoting member of Congress, has sponsored legislation—H.R. 870—to extend Puerto Rico Chapter 9 bankruptcy protection.

The Associated Press reported that “the White House threw cold water Monday on the notion of bailing out Puerto Rico from its financial crisis, instead urging Congress to consider changing the law so the island can declare bankruptcy.” Of course, this is typical Washington doublespeak because bankruptcy protection—H.R. 870—would be a federal bailout by other means.

Puerto Rico, as a commonwealth, does not have the legal authority to file for bankruptcy. Some in Congress—mostly Democrats, but some Republicans, too—are seriously considering H.R. 870 as a backdoor bailout.

What happens when you run out of other people’s money? Well, if you’re the Democratic Governor of Puerto Rico, you demand a bailout, and for others to “share the sacrifice.” Governor Alejandro García Padilla told the New York Times earlier this week that Puerto Rico’s debt “is not payable. There is no other option.” Padilla would love to find “an easier option,” as he swears, “this is not politics, this is math.”

Not politics? Padilla is engaging in the worst kind of politics in which political elites insist that taxpayers pay for their failure. Puerto Rico’s debt crisis is the result of years of big government run amok. Over the past decade, liberal politicians in San Juan engaged in profligate spending and borrowing to cover the costs of everything from welfare to pensions to government services. Progressive policies that saw the public-sector debt grow as the economy shrank. Not politics, but math? Then why are public-sector salaries more than 90 percent higher than salaries in the private sector? Why not cut spending to pay your bills? Because Padilla has promised not to lay off government workers—two-thirds of Puerto Rico’s budget is payroll, and it’s off the table.

Puerto Rico’s political elites refuse to do what is necessary to create economic growth. Changing the nation’s bankruptcy laws to give them a special exemption is wrong. It’s a form of cronyism—politicians in Washington doing favors for politicians in San Juan. It’s letting them off the hook; absolving them of their responsibilities. The political elites in Puerto Rico have implemented anti-growth excise taxes on job creators while crippling the island’s economy with chronic spending on welfare subsidies and an ever-expanding public sector. The government employs more than a quarter of the island’s workforce, and its labor force participation rate—40.6 percent— is the lowest in the Western Hemisphere. More than half the population is not working. Why work if welfare pays more than a job?

So Padilla, Pierluisi, and the island’s political establishment are asking their friends in Washington for a favor. Their plea for Chapter 9 bankruptcy is gaining momentum as the political class looks to protect itself.

The bailout bill—H.R. 870—does not require any meaningful, market-based reforms. It’s a “get out of jail free” card for Puerto Rico’s political elites and their failed statist policies. Chapter 9 is not a solution, but rather, at best, a temporary fix. And, Chapter 9 might not be a fix at all. Bankruptcy procedures can take months or years to work through the system. H.R. 870 is a bad bill. What’s needed is a radical change of less spending, regulating, and taxing.

Americans are tired of bailouts and boondoggles—TARP, Solyndra, General Motors, the ObamaCare rollout. Let’s not add failed governments and political elites to the list. Americans don’t want a “Great Big Fat” bailout for Puerto Rico. We don’t want our very own Greek island.