How Many Attacks Must We Endure Before the Islamic Link is Recognized?

Jerry Newcombe
|
Posted: Jan 12, 2017 12:01 AM
Share   Tweet
The opinions expressed by columnists are their own and do not necessarily represent the views of Townhall.com. 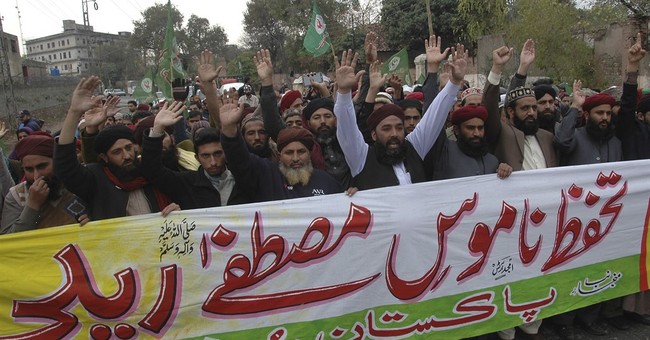 Liberalism is putting our lives at risk. Liberalism will not recognize the link between Islam and the recent spates of attacks the West is enduring---including the shooting in the Fort Lauderdale airport baggage claim, the truck-driving attack on Christmas shoppers in Berlin, or the Ohio State student who drove his car into a crowd and then stabbed other victims.

I have personally flown many times in and out of the Fort Lauderdale airport. I have often traveled on Delta and picked up my baggage at that carousel where the shooting occurred on Friday. To think of innocent travelers as victims of a random shooting is beyond comprehension.

The media has played up the apparent mental problems of the alleged shooter. Yet in an important item in gotnews.com(1/7/17), they show the nexus of the shooting to radical Islam.

They report: “Fort Lauderdale Airport terrorist Esteban Santiago registered on MySpace under the name ‘Aashiq Hammad’ and recorded Islamic religious music on the site, 3 years before he ever deployed to Iraq as a U.S. soldier, destroying the lying mainstream media’s narrative that he was just a mentally disturbed veteran and that ‘Islam had nothing to do with it.’” [Emphasis mine]

Jihadwatch.org is maintained by bestselling author Robert Spencer, a walking encyclopedia on all things Islamic. His latest book is The Complete Infidel’s Guide to Iran.

Spencer posted on the shooter: “Notice how calm and determined he is. Almost as if he considers himself to be on some kind of mission. Perhaps Aashiq Hammad was mindful of this promise— particularly if he really had mental health issues: ‘Fight them; Allah will punish them by your hands and will disgrace them and give you victory over them and satisfy the breasts of a believing people, and remove the fury in the believers’ hearts.’ (Qur’an 9:14-15) Jihad as therapy.”

When you watch the video of part of the shootings on TMZ, you are struck as to how nonchalant the gunman walks, as he proceeds to pull out his weapon and blow away total strangers with head shots.

In an email exchange with me, Spencer noted that, in addition to the MySpace activity, Santiago “has been photographed making the one-finger signal of adherence to Islamic monotheism, that has come to be associated with the Islamic State (ISIS).”

Tragically, notes Spencer, we don’t hear these things in the mainstream media: “All of this is being ignored in the establishment propaganda media, which seems determined to downplay and deny Islamic terror attacks on US soil, no matter what the facts at hand are, and to keep Americans ignorant and complacent regarding the jihad threat.”

I also asked Spencer this question through email: Aren’t there many Islamic spokespersons who denounce these kinds of assaults? He wrote me, “Well, they condemn the attacks. I find those condemnations empty and often artfully worded so as to condemn attacks on innocent people, without actually saying that the victims at hand were innocent.”

A colleague of mine, John Rabe, has written a fascinating book called, None Dare Call It Islam. I asked him for a comment for this piece on the tragic shooting.

Rabe wrote me, “Though mental illness was obviously a significant factor in the Fort Lauderdale shooting, one wonders what might have been different if America’s government hadn’t been engaged in an eight-year-long project of denying any connection between Islam and terrorism.”

Rabe adds, “There will now be calls for all sorts of oppressive new laws designed to prevent the next round of violence; yet the suspect turned himself in to the FBI proclaiming his own mental illness and an affinity for ISIS—and was sent back out onto the streets with a pat on the back and a ‘good luck.’”

So I go back to my original question---how many of these attacks do innocent people in the West have to endure before we realize there are some Muslims---thankfully far from the majority---who interpret their religion to teach that they worship their god by killing innocent people?

Every time I ponder this, I cannot help but think of the statement of Jesus in John’s Gospel, said specifically to His disciples: “…the time is coming when anyone who kills you will think they are offering a service to God.”

I’ll never forget the statement on a video of an imam from the Middle East who preached hatred in the West. You can see the video in Geert Wilders’ classic online film, Fitna, the producing of which caused him to be charged with a hate crime.

The imam said, “What makes Allah happy? Allah is happy when the kefirs [non-Muslims] get killed.” How many kefirs must be killed before we wake up and connect the dots?