The Scapegoating of Christians in Egypt 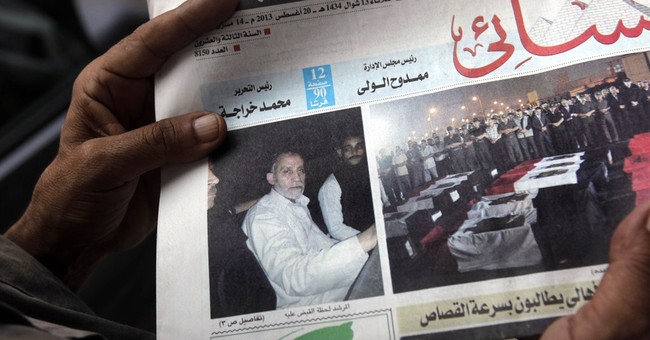 In the Bible, on the Day of Atonement, the High Priest was instructed to sacrifice one goat for the forgiveness of sins (for a year). He laid his hands on another goat and confessed the sins of the people, and then banished it to the wilderness.

This second goat we have called the “scapegoat” in English, ever since the phrase was coined by the first major translator of the Bible into English (from the original Hebrew and Greek), William Tyndale (c. 1494-1536). (Wycliffe translated it from Latin.) Much of Tyndale’s work was used in the King James Bible (1611) and thus popularized all over the world.

Christians view Jesus’ death as fulfilling all the ceremonial sacrifices, including that sacrificial goat and the scapegoat---and the Passover lamb and everything else.

Scapegoating means taking punishment, out on an innocent party, for the sins of someone else. Right now Christians are unfairly being made the scapegoat by the Muslim Brotherhood in Egypt, since Morsi was ousted from power last month.

The crazy thing is that the pushback against the government of Mohammad Morsi, the elected president of Egypt until early July, came not just from Christians---but also middle class youth, political liberals, and secular Muslims---all of whom opposed the leader’s ties to the Muslim Brotherhood and his imposing a strict Islamist regime.

Millions of Egyptians---again, most of them Muslims---protested against Morsi, until the army stepped in on July 3 in a coup. So why are Christians alone being singled out by Morsi’s supporters, who cry, “Victory or Martyrdom”?

With somewhere between 10-15 million (in a country of 85 million), Egypt has the largest Christian population of any Middle Eastern country. For now.

Samuel Tadros, a Research Fellow at the Hudson Institute's Center for Religious Freedom, is quoted as saying that last Wednesday (8/14/13) appears to have been the worst single day of violence against Egypt's Coptic Church since the 14th century.

He says the Muslim Brotherhood blames Christians for ousting Morsi, so it can paint the military-backed government as anti-Islamic.

Tadros says the Coptic pope has gone into hiding, and many surviving churches have canceled Sunday services as Christians huddle in their homes, fearing for their lives.

In National Review Online (8/20/13), Rich Lowry writes, “Egypt is in the midst of an anti-Christian pogrom. Supporters of ousted Muslim Brotherhood president Mohamed Morsi are lashing out at the country’s Copts for the offense of being Christian in Egypt.”

Bishop Julian Dobbs from the Convocation of Anglicans in North America, who has on occasion visited the Christian communities in Egypt, sent me an email on the situation.

He notes, "Supporters of ousted president Mohammad Morsi have gone on the rampage against Christians in Egypt. A ten-year-old girl was gunned down as she was walking home from her Bible study class, and churches and other Christian property have been torched by rioters. Egyptian Christians have come under frequent attack since the uprising that led to Morsi's removal; they are being scapegoated for his fall.”

Estimates vary as to how many Christian churches, orphanages, and schools have been destroyed. Some have put the number as high as 80, just since last Wednesday.

Rev. Dr. Mouneer Hanna Anis, Bishop of the Anglican Diocese of Egypt recently wrote, "Please pray that the situation will calm down, for wisdom and tact for the police and the army, for the safety of all churches and congregations, and that all in Egypt would be safe."

The Muslim Brotherhood is an international Islamic organization that was founded in Egypt in 1928, and it’s dedicated to restoring the caliphate; the caliph was the successor of Mohammed as the political, military and spiritual leader of the Muslims

Perhaps the Muslim Brotherhood is best understood by their creed: “Allah is our objective. The Koran is our law. The Prophet is our leader. Jihad is our way, and death for the sake of Allah is the highest of our aspirations.” No wonder the Egyptian Christians are feeling their wrath.

In their book, Shariah: The Threat to America, the Center for Security Policy notes that the Muslim Brotherhood is “the root of the majority of Islamic terrorist groups in the world today.”

Pray for the Christians in Egypt as they have been scapegoated by the Muslim Brotherhood.