How Do We Encourage Terrorism? Let Us Count The Ways

Jeff Jacoby
|
Posted: Jun 02, 2017 10:00 AM
Share   Tweet
The opinions expressed by columnists are their own and do not necessarily represent the views of Townhall.com. 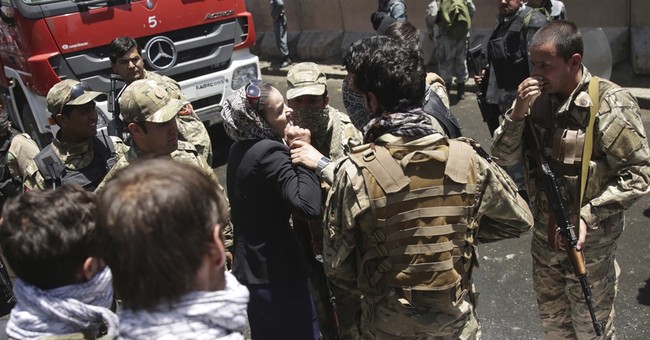 AT LEAST 80 victims were murdered in Kabul on Wednesday morning when a suspected car bomb blew up in a diplomatic area of the Afghan capital. As many as 400 people were wounded, most of them civilians.

In Baghdad late Monday night, 27 people were killed when ISIS detonated two car bombs in busy commercial districts. One of the bombs exploded outside a popular ice cream shop, engulfing the building in a massive fireball and leaving the scene strewn with blood and severed limbs.

In Egypt last Friday, a bus filled with Coptic Christians on their way to pray at a nearby monastery was stopped by Islamic State gunmen. They forced the passengers off, then ordered them to recite the Shahada, the Muslim profession of faith. When the Christians refused, the gunmen opened fire, murdering 28 men, women, and children.

In the southern Philippines one day earlier, Islamist killers rampaged through Marawi, beheading the police chief, torching buildings, and abducting a Catholic priest and 10 worshippers from the local cathedral.

It's been only a week and a half since the savagery at Manchester Arena, and already that atrocity is old news. The global terror wave continues unabated. So far this year, more than 510 terror episodes have been reported worldwide.

Plainly, the perpetrators of terrorism have not been deterred. And why would they be, given all the things we do to encourage them?

We encourage terrorism when we funnel money to regimes that pay for the recruitment and arming of extremists. That is what the United States and its allies did when they agreed, as part of the nuclear deal negotiated by the Obama administration, to unfreeze tens of billions of dollars' worth of Iranian assets. Iran is the world's foremost state sponsor of terror. Besides its own lethal Quds Force, it funds the Hezbollah terror network and Shiite death squads in Iraq, Afghanistan, and Pakistan. Last year the United States secretly airlifted $400 million in cash to Tehran just as four American hostages were released — a payment that emitted more than a whiff of ransom. No wonder Iran brashly asserts that funding for its homicidal proxies will continue.

We encourage terrorism when we lavish foreign aid on the Palestinian Authority, which uses the money to pay handsome bounties to terrorists convicted of deadly attacks on Israelis. In 2016, those payments constituted more than 7 percent of the Palestinian Authority budget. Yet that budget continues to be heavily underwritten by foreign aid from the United States and other Western nations.

We encourage terrorism in other ways, too.

The forces of terror are reinforced when terrorists are lionized in the media and treated as legitimate public-policy interlocutors. For years, terrorists have been hailed as celebrities, fawned over by journalists, and deferentially received in the halls of power.

Examples could fill a dozen columns. The United Nations invited Yasser Arafat, gun on hip, to address the General Assembly. The New York Times published — on Sept. 11, 2001, no less — a flattering profile of former Weather Underground bomber Bill Ayers. The Metropolitan Opera staged "The Death of Klinghoffer," an opera rationalizing the hijacking of a cruise ship by Palestinian terrorists and the murder of an elderly, wheelchair-bound Jew.

At the Puerto Rican Day Parade in New York on June 11, the guest of honor will be Oscar Lopez Rivera, an unrepentant member of the FALN terrorist group who spent 35 years in federal prison for plotting to overthrow the government.

When convicted terrorists are treated to parades on Fifth Avenue, it encourages more terrorism everywhere.

And this, too, encourages terrorism: the rush after each atrocity by those eager to condemn the victims. In the wake of the Boston Marathon bombing, former London mayor Ken Livingstone went on Iranian TV to explain the bloodshed as an understandable reaction to "the torture at Guantanamo Bay." In an article for Foreign Policy Journal, Richard Falk — a UN official and Princeton professor — attributed the horror wrought by the Tsarnaevs to America's "fantasy of global domination."

When the global jihad will end, none of us can say. But this much, at least, is certain: The more we encourage the killers, the longer the killing will go on.