Obama Can't Rewrite Immigration Law, Even For The Better 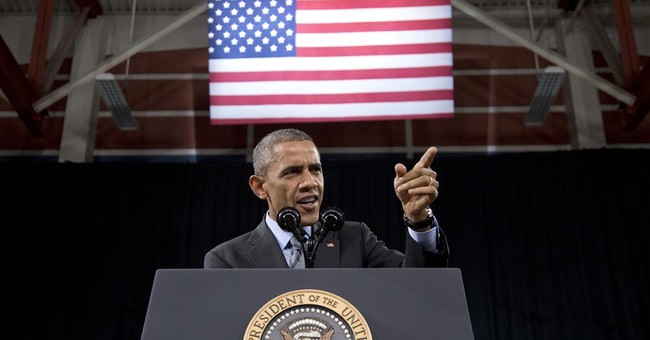 During a speech about immigrationin Chicago last November, President Obama was interrupted by hecklers demanding that he stop deporting illegal aliens.

"You're absolutely right that there have been significant numbers of deportations,"Obama replied. "But what you're not paying attention to is the fact that I just took action to change the law."

That went over well with the audience, which applauded as Obama explained that he had bypassed Congress and directed federal agencies to grant legal status to more than four million illegal immigrants living in the United States. It didn't go over nearly so well with Texas and 25 other states, which challenged the initiative in federal court, arguing that the president has no power to unilaterally change US immigration policy.

So far, two federal courts have agreed with the states that the administration cannot simply ignore existing immigration rules, or impose a sweeping new policy that hasn't been authorized by Congress.

In February, a US District Court in Texas issued an injunction blocking the legalization plans from taking effect. The administration appealed, but on Monday, ina strongly-worded ruling, the Fifth Circuit Court of Appeals upheld the injunction. It called the president's changes "manifestly contrary" to existing immigration law, and rejected the claim that Congress's refusal to pass the DREAM Act — which would have legalized large categories of undocumented aliens — freed Obama to impose its provisions by executive order. To the contrary, ruled the court, congressional inaction confersnopower on the executive branch.

The administration will appeal the latest ruling to the Supreme Court. But it isn't immigration policy that is at stake. It is the Constitution's system of checks and balances, and whether Americans are to live under the rule of law — or the rule of the White House.

As a matter of humane public policy, Obama's support for upgrading the status of many undocumented aliens, especially those who were brought to the United States as children and know no other homeland, has much to recommend it. Were Congress to pass comprehensive immigration reform, enabling "DREAMers" and their families to work without fear of deportation and clearing a path for them to become citizens, the country would be decidedly better off.

But Congress hasn't passed immigration reform. And under the Constitution, Obama cannot implement it unilaterally, no matter how desirable he thinks it might be or how much he may disapprove of the existing statutory scheme.

George W. Bush was widely criticized for his use of "signing statements" to challenge parts of new laws that he deemed infringements on executive authority. Then-candidateObama called it "a clear abuse of power"to use such statements "to evade laws that the president does not like." If elected, he pledged, he would not "use signing statements to nullify or undermine congressional instructions as enacted into law."

Yet time and again, Obama has nullified, undermined, or simply ridden roughshod over legislative directives that he finds inconvenient.

He unilaterally changed numerous provisions in the Affordable Care Act, for example —postponing the employer mandate, issuinghundreds of waiversallowing unions and businesses to avoid the law's strictures, anddoling out health-care subsidiesthat Congress never appropriated. Hejettisoned work requirementsin the 1996 welfare-reform law, despite lacking any statutory power to do so. He authorized exemptions from requirements of the "No Child Left Behind" law, though nothing in that law allows for such exemptions.

As federal policy, these changes may be good, bad, or indifferent. As acts of presidential insolence, they pose a serious threat to our system of limited government. "So sue me," Obama said last year, when House Republicans objected to executive orders issued in defiance of federal law. He repeatedly told crowds that he didn't need Congress to get things done. "We're not just going to be waiting for legislation. . . .I've got a pen and I've got a phone."

Presidents and Congress are often in tension with each other. The Framers of the Constitution knew that would be the case, and designed a system meant to keep either branch from growing too powerful. The Constitution expressly vests all legislative power in Congress, and just as expressly obliges the president to "take Care that the Laws be faithfully executed." When issues like immigration divide the American people, they tend to divide Congress too. Presidents can use the bully pulpit to try and shift public opinion, but only Congress can legislate. A president who rewrites laws to fit his own preferences sabotages the constitutional order he took an oath to uphold.

Obama knows this, of course. Indeed,he used to say so frequently.

Time and again, he was challenged by immigration advocates for his failure to change immigration policy. Time and again he explained thathis hands were tied. In February 2013, to cite one of many instances, Obama was urged to do more to keep families from being "broken apart" without waiting for Congress to pass immigration reform.

That is still the job — to execute the laws, not to write them. Obama may no longer find it expedient to say so. The Supreme Court certainly should.