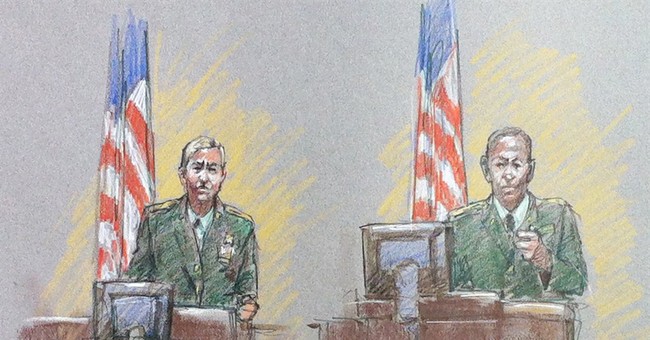 When the US government's National Counterterrorism Center compiled its annual report for 2009, it didn't overlook the deadliest terror attack on American soil since 9/11.

"On 5 November 2009, at 1:30 PM, in Fort Hood, Texas," the report notes in its chronology of "high-fatality terrorist attacks" — those that took at least 10 lives — "an armed assailant entered the Fort Hood Soldier Readiness Processing Center and opened fire, killing one civilian and 12 soldiers, wounding seven civilians, 17 soldiers, and 18 [other] people, and damaging the facility.… No group claimed responsibility, although authorities believed an unaffiliated Sunni extremist was responsible."

That "armed assailant" was Major Nidal Malik Hasan, an Army psychiatrist who bluntly admits perpetrating that day's massacre as an act of war against the United States. On the first day of his court-martial this month, Hasan told jurors: "The evidence will clearly show I am the shooter." Military rules bar the accused in a court-martial from pleading guilty to a capital crime even if he wants to, so a plea of not guilty was entered on Hasan's behalf by the judge, Colonel Tara Osborne. But Hasan, who is representing himself, has consistently maintained that he slaughtered his Fort Hood comrades out of loyalty to jihadists in Afghanistan.

"I was on the wrong side of America's war, and I later switched sides," Hasan said in his opening statement. "We in the mujahideen are imperfect beings trying to establish a perfect religion." A few days before the court-martial got underway, Hasan disavowed his US citizenship and the oath he took as an Army officer. During a pretrial proceeding in June, Hasan told the judge he wished to mount a "defense of others" strategy in responding to the charges he faces. When Osborn asked whom he was defending, Hasan replied: "The leadership of the Islamic Emirate of Afghanistan — the Taliban."

Yet virtually from the hour it happened, the Defense Department insisted on calling the Fort Hood shooting an episode of "workplace violence," not of terrorism or war — a rhetorical dodge that reeked of political correctness. But when the Pentagon insisted in March that the Fort Hood victims were not entitled to receive Purple Hearts, that PC disingenuousness became something worse: a betrayal.

The Army's justification was that issuing the decoration to the Fort Hood casualties could undermine the shooter's right to due process, by implying that the victims had been killed or wounded in an action against an enemy of the United States. That might enable defense counsel to "argue that Major Hasan cannot receive a fair trial because a branch of government has indirectly declared that Major Hasan is a terrorist." Besides, the Pentagon added, the Purple Heart is for those hurt by America's international foes; it shouldn't be expanded to domestic criminal or terror attacks.

Such circular reasoning never passed the smell test. As noted, the National Counterterrorism Center identified Hasan's bloodbath early on as a "high-fatality terrorist attack." And no one denied Purple Hearts to the "domestic" casualties in the Pentagon on 9/11.

But even if there had been some scrap of merit to the notion that the gunman's due-process rights could be compromised by awarding Purple Hearts to his victims, it has been completely obliterated by Hasan's conduct during his court-martial. He has done everything within his power to make it clear beyond a shadow of a doubt that he opened fired on US soldiers with the explicit purpose of aiding America's enemies. He identifies himself as a jihadist. He declares that he "switched sides." He renounces his citizenship.

What Hasan perpetrated at Fort Hood was not "workplace violence," it was an act of war. And American military personnel killed or wounded by the enemy have been entitled since the time of George Washington to the recognition conferred by the Purple Heart.

At a memorial service five days after Hasan's lethal assault, President Obama eulogized those who had died. "This is a time of war," he said. One by one he described those who had given the last full measure of devotion. "Here, at Fort Hood, we pay tribute to 13 men and women who were not able to escape the horror of war, even in the comfort of home."

To deny the victims of Hasan's attack the medal they earned with their lives or blood is no way to pay that tribute. They deserve better from their commander-in-chief — and their nation.