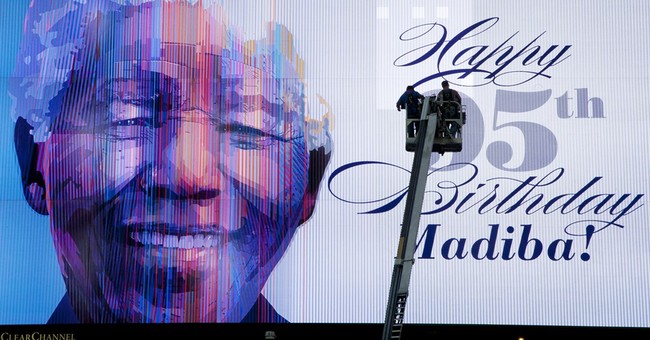 NELSON MANDELA turned 95 last week, spending his birthday in a Pretoria hospital where he has been fighting a lung infection since June. His illness unleashed a worldwide wave of international concern and well-wishes. The most revered statesman in Africa's history may be physically in decline, but the heartfelt tributes make clear that Mandela's moral stature, and his legacy as one of the great peacemakers of the modern age, remains undiminished.

When he was jailed in 1962, Mandela was a man of violence. As a leader of the military wing of the African National Congress, he was convicted for his involvement in sabotage, which he freely admitted in court. He has always maintained that there was no other option — that apartheid could never have been uprooted without armed struggle. He wouldn't budge from that position even to get out of prison; in 1985, when the apartheid government under P. W. Botha offered to release Mandela if he would reject violence as a political weapon, he indignantly refused.

As Jay Nordlinger points out in his history of the Nobel Peace Prize, that's the reason Amnesty International — though it advocated for Mandela's release — never designated him a "prisoner of conscience." That title is

But he didn't continue. The greatness of Mandela is that he walked out of prison unembittered and unvindictive; almost at once he became not just the embodiment of South Africa's resistance to apartheid, but of South African reconciliation, patience, and tolerance. Twenty-seven years behind bars would have left many a revolutionary enraged and ruthless, more dangerous than ever. Mandela — world-renowned, a hero to millions of his fellow-citizens — could have brushed aside the rule of law and seized power by force. He could have done in South Africa what Fidel Castro did in Cuba or the Ayatollah Khomeini did in Iran or Robert Mugabe did in Zimbabwe: Supplant a bad regime with a far worse regime. In a century replete with "people's revolutions" that degenerated into tyranny, on a continent filled with violent postcolonial dictatorships, would one more liberator-turned-oppressor have been so unexpected?

Instead, Mandela showed forbearance and humanity. In his hour of triumph he was magnanimous and dignified and decent. In some ways he called to mind America's own Great Liberator. In his Second Inaugural Address, Abraham Lincoln pleaded with his countrymen to come together "with malice toward none, with charity for all" in order to "bind up the nation's wounds." Mandela had been unwavering in defending the ANC's right to use violence in the cause of freedom, but once it was clear that apartheid was finished, he became even more unwavering in his opposition to violence.

When ANC leader Chris Hani was assassinated in the spring of 1993, there were widespread fears that South Africa was about to erupt in a bloodbath. Mandela was not yet president, but in a stirringly "presidential" moment he went on national television and showed why comparisons to Lincoln are not outlandish.

"Tonight I am reaching out to every single South African, black and white, from the very depths of my being," he began. "The cold-blooded murder of Chris Hani has sent shock waves throughout the country and the world. Our grief and anger is tearing us apart." Mandela implored the nation not to plunge over the abyss. "Our decisions and actions will determine whether we use our pain, our grief, and our outrage to move forward to what is the only lasting solution for our country — an elected government of the people, by the people, and for the people."

When Mandela and F. W. de Klerk were jointly awarded the Nobel Peace Prize later that year, the Nobel Committee hailed them for "looking ahead to South African reconciliation instead of back at the deep wounds of the past." De Klerk — South Africa's last white president, and a remarkable statesman in his own right — had deliberately sacrificed his career in the cause of equality and freedom. Mandela had spent 27 years in jail, and then — in the same cause — done something even harder: He had forgiven his jailers.

Few revolutionary heroes can make such a leap of faith. That is why revolutions so often eat their young — and why Mandela's greatness of character turned out to be South Africa's greatest asset.