Jeff Davidson
|
Posted: Dec 13, 2020 12:01 AM
Share   Tweet
The opinions expressed by columnists are their own and do not necessarily represent the views of Townhall.com. 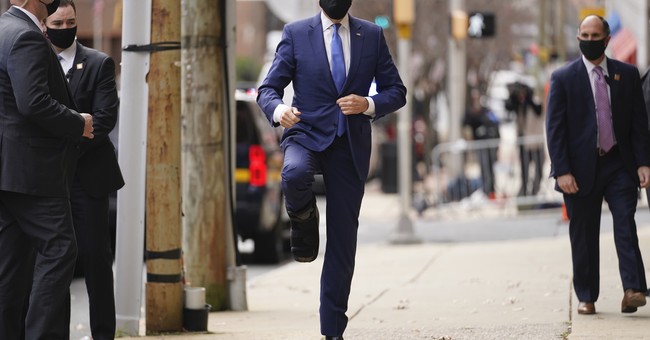 “Many years ago, there was an Emperor who was so very fond of new clothes that he spent all his money on them. He did not trouble about his soldiers... He only went out when he had the chance to show off his new clothes. He had a different suit for each hour of the day. Most kings could be found sitting in council. It was said of the Emperor, ‘He is sitting in his wardrobe.’” So begins the 1837 children's fable, The Emperor's New Clothes, by Hans Christian Andersen.

“One day, two fellows calling themselves weavers came to town. They said that they knew how to weave cloth of the most beautiful colors and patterns. The clothes made from this wonderful cloth would be invisible to everyone who was unfit for the job he held, or who was very simple in character,” goes the story.

"'These must, indeed, be splendid clothes!' thought the Emperor. 'If I had such a suit, I might at once find out what men in my kingdom are unfit for their job. I would be able to tell the wise men from the foolish! This stuff must be woven for me immediately.' He gave large sums of money to both the weavers in order that they might begin their work at once."

The new suit is imaginary, and no one -- including the Emperor, his family, all his aides, members of Congress, including RINOs, and the mainstream press -- is willing to admit it. As the Emperor and his wife parade down Pennsylvania Avenue, no one is willing to say he is wearing only his underwear. Why?

Each and every party wise to this enormous facade fear the drastic repercussions of voicing what is readily apparent to anybody who has even an iota of objectivity. Their concern does not emanate so much from the Emperor himself. Their fear stems from their own unforgiving, zealous, often vicious peers, who tolerate no deviation from the standard party narrative, whatsoever.

Such peers will cancel anyone, instantly, for having the temerity to say what is exceedingly true. Finally, a small child blurts out the obvious, "But the Emperor has nothing at all on!"

Okay, so I mixed elements of Andersen's short story with Joe Biden's candidacy and presumption as 'president-elect.' Nevertheless, the burning question remains, is anyone on the Left willing to state the obvious? That Joe Biden's cerebral faculties for handling the most important position in the world are questionable?

It is rumored that Biden (the Time Magazine co-person of the Year!), won't last 75 days on the job and that the Democrats are unconcerned. CNN has recently "outed" Hunter Biden after months of subterfuge, so Joe’s days at the top are numbered. He is a mere tool of the Left and they have long contemplated quickly replacing him, likely by invoking the 25th amendment. With this ploy in mind, Biden’s controllers hand-picked Commie Kamala Harris (the other Time Magazine co-person of the Year), among the most Leftist senators ever; someone even further left than Barack Obama.

Nevermind that she was a total flameout in the Democrat primaries, unable to muster even two percent of Democrats’ support. “She has proved to be an uneven campaigner who changes her message and tactics to little effect and has a staff torn into factions.” Harsh words, indeed, but doubly so when you discover they were printed by the uber-leftist New York Times.

The Democrat media machine has breathlessly covered every development of what they are portraying as a done deal, that Joe Biden is our 46th president, despite deep concerns as to the validity of the voting procedures in the six remaining swing states. Biden’s "wardrobe" shortcomings, however, extend much further than his presumed administration.

Biden’s credentials after 47 years in Washington D.C. reveal that his closet is bare. His kowtowing to the Chinese, taking bribes for decades and other scandals will impede his effectiveness.

His dirty deals with Russia, Romania, Kazakhstan, and Ukraine, well known to those on the right, will further obstruct him. Concurrently, Hunter Biden’s ‘wardrobe’ is not much more than rags. Hunter has been involved in schemes throughout the world, aided and abetted by his father and his uncle.

For the Time Being

It is the wish of many people that Biden and his bereft wardrobe take a hike, and that he won’t be "president-elect" much longer. For now, the mainstream press will continue salivating over the "forthcoming" far-Left administration.

Share this on Facebook
Tweet
Is This Parody? A Woman Took a COVID Test...And Her Reaction Is Absolutely Outrageous
Matt Vespa
The Today Show Cornered Kamala Harris...And Things Quickly Went Off the Rails
Matt Vespa