This is Not Your Father's Bob Woodward

Jeff Davidson
|
Posted: Sep 19, 2020 12:01 AM
Share   Tweet
The opinions expressed by columnists are their own and do not necessarily represent the views of Townhall.com. 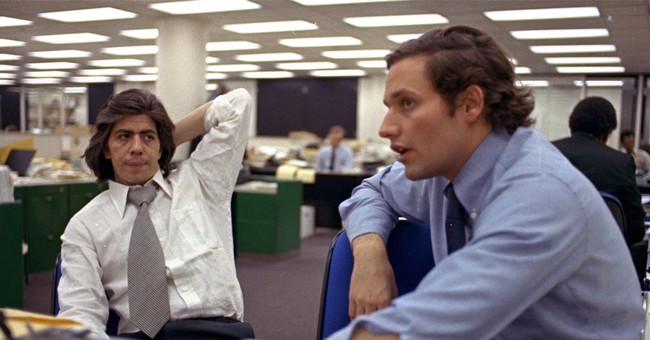 Bob Woodward, as is widely known, rose to fame as a reporter for The Washington Post. At age 29, he had teamed with Carl Bernstein to uncover the Watergate break-in that occurred in June 1972. In 1974, they wrote All the President's Men, from which the award-winning movie was made in 1976.

Thereafter, Bob Woodward was regarded by many as a standout reporter who investigates the stories that no one else can do. Woodward wrote nearly 20 books since his first, mainly focused on incumbent presidents’ policies, with a particular bent on diminishing the reputation of GOP presidents.

A Brief Step out of the Democrat Closet

On April 22, 2019, Woodward stated that the Steele dossier merited extensive review and that reliance by the intelligence community on the dossier needed “to be investigated.” This followed the Mueller committee’s inability to “corroborate many of the document’s key claims.”

Woodward’s ‘realization’ was music to conservative ears. Here, after years, was a heavy hitter from the mainstream media admitting what the rest of his peers had black-balled as a meritless story worthy of no mentioning whatsoever. Much like the Soviet Union of the 1930s, these rabid media gatekeepers are keen in their propaganda pursuits and information control. As such, they would never give air time or column inches to the greatest attempted coup since our nation’s founding.

On Fox News, Woodward told Chris Wallace that he was concerned about claims in the Clinton-funded dossier, which the CIA had employed in their January 2017 rough-draft assessment of Russian interference in the 2016 U.S. presidential election.

“What I found out recently,” Woodward said verbatim, “which was really quite surprising, the dossier, which really has got a lot of garbage in it and Mueller found that to be the case, early in building the intelligence-community assessment on Russian interference, in an early draft, they actually put the dossier on page two in kind of a breakout box.”

“I think it was the CIA pushing this. Real intelligence experts looked at this and said ‘No, this is not intelligence, this is garbage,’ and they took it out,” he continued. “But in this process, the idea that they would include something like that in one of the great stellar intelligence assessments, as Mueller also found out, is highly questionable. Needs to be investigated.”

Woodward, Back into the Woodwork

Suddenly he went silent. Search for "Bob Woodward" combined with "Steele dossier." After April 2019, the trail ends. Did the Steele dossier somehow become a valid document? Did Woodward gain inside information that the dossier was reliable? Or, possibly, was he told to forsake this inquiry?

Jeff Bezos, the globalist, earth-ruler wannabe, über-liberal billionaire, and owner of WaPo, says he does not steer his reporters. Who can say? For 17 months, Bob Woodward has stayed silent about the attempted takedown of Donald Trump as a candidate and then as a president.

Meanwhile, independent, rigorous investigative reporting has shown with certainty that high-ranking officials within the Department of Justice, the FBI, the NSA, and the CIA, acting on behalf of themselves, targeted Donald Trump and his administration.

Carl Bernstein, his one time compatriot, is now a correspondent for CNN, who announces the Trump ‘scandal of the century’ every other time he opens his mouth. Proven wrong time and time again, Bernstein has entered Joe Biden territory.

Mid-September, 2020: With his book, Rage, Bob Woodward is back in the news allegedly fatally exposing Donald Trump. He's on the TV talk shows, basking in the limelight, with no need to provide a balance as to what's in his book.

Instead, he serves as the setup man for show hosts who go ga-ga thinking they have the smoking gun that will stop Trump from being re-elected. Plot spoiler: They do not have anything, much like the Pelosi impeachment proceedings.

If the typical person speaks as much as 30,000 words per day, Trump speaks 50,000 words or more. And the public has grown quite weary of the these constant parsing, slicing, and dicing efforts to bring down our president.

Watergate, where one political party was spying on another party, was among the biggest news features of the 20th century and made Woodward’s reputation. Yet, Watergate can't hold a candle to the attempted overthrow of a president. What would covering the 2016 to 2019 attempted coup d'état mean to Woodward’s reputation in the 21st century? And forever?

Perhaps Woodward doesn't have the energy to handle this. Maybe he can only do phoners today. Nevertheless, he knows as well as you and I do, as well as the late Ben Bradlee would have known, that the attempted coup d'état represents the exposé of the ages.

What forces could be at play that would inhibit Woodward from proceeding? He has fallen a very long way. To be sure, this is not your father's Bob Woodward.

Woodward and Bernstein, as a dynamic duo, once meant something to journalism. They have since sunk to the depths of the rest of the libstream media and are not worthy of our attention.