Jeff Crouere
|
Posted: Nov 01, 2020 12:01 AM
Share   Tweet
The opinions expressed by columnists are their own and do not necessarily represent the views of Townhall.com. 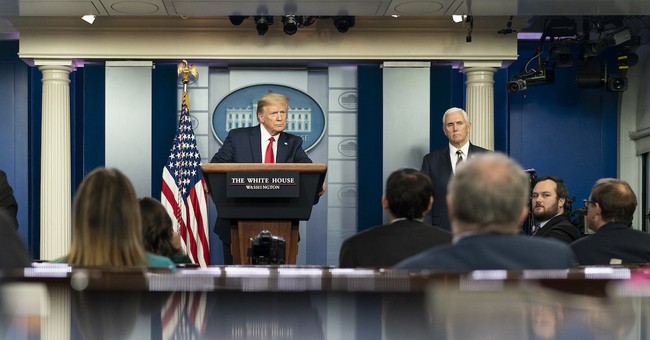 In this campaign, the difference between Biden and President Donald Trump is dramatic. Combined with the Democratic National Committee, Biden outspent Trump and the Republican National Committee by a total of $200 million. Biden enjoyed an even more significant advantage of $343 million when the political action committees and outside groups affiliated with the two campaigns were compared.

Yet, these advantages do not come close to the massive benefits that Biden has received from the mainstream news media and the “big tech” social media giants. Every day, President Donald Trump is pummeled with unfair media coverage and questions by reporters who are incredibly biased. His news conferences and media opportunities are always combative with reporters trying to manufacture controversies for the president.

In contrast, former Vice President Joe Biden is protected by reporters who do his bidding. For example, Biden was recently asked what flavor milkshake he bought, but not aggressively questioned about his son’s “laptop from hell.”

This week, Biden briefly took media questions after he voted. Of course, he was not asked about the scandalous revelations included in his son’s laptop. For example, there was evidence that the former vice president had knowledge of his son’s corrupt consulting deals. This contradicted Biden’s repeated claims that he knew nothing about his son’s various consulting arrangements.

The New York Post printed a series of stories about the laptop, but this reporting was completely suppressed by Twitter and Facebook. In fact, The New York Post’s Twitter account was locked because of this reporting. These social media titans have chosen Biden in this presidential race. Along with Google algorithms favoring Biden, the president is facing a tremendous hurdle to overcome.

Even though the former vice president’s lies were further exposed by military veteran Tony Bobulinski, the media showed no interest in the story. Bobulinski agreed to come forward after the Hunter Biden story was called “Russian disinformation” by U.S. Congressman Adam Schiff (D-CA) and others. Bobulinski told the truth to protect his family’s sterling reputation of proud service to our country.

This courageous whistleblower was interviewed by Tucker Carlson of Fox News. He dramatically discussed how he met twice with Joe Biden to discuss these international business deals.

Bobulinski told Joe Biden’s brother that he was worried about the former vice president’s ties to a Chinese energy company. Of course, nothing was done to cancel these deals, since this type of arrangement had become the Biden family business.

In a country with fair media coverage, this story would have been front-page news for weeks. Instead, there was practically no coverage of this bombshell. It is typical of how the media have treated all controversial news involving Biden. His mental issues have been ignored even though it is apparent that he is experiencing some type of incapacity. Just recently, Biden referred to President Trump as “George,” not just once, but twice.

The media not only suppresses negative stories about Biden but also positive stories involving President Trump. This week, it was announced that the nation’s gross domestic product grew by a blistering 33.1% rate in the last quarter. The media treated this report with disinterest. Instead, it breathlessly recounted fake poll results showing Biden far ahead and Covid-19 stories involving a record number of “cases.”

The value of the media manipulation Biden has received is worth tens of billions of dollars. Clearly, the mainstream media and the big tech giants are the largest donors to the Biden campaign.

This type of treatment is nothing new. While the media have been very liberal for decades, there has been an intense type of hostility directed toward President Trump. The media have been totally opposed to Donald Trump since the day he came down the escalator and announced his presidential campaign in 2015.

Since then, there has been no fairness or objectivity in their reporting about President Trump. In the twelve-week period ending October 20, the Media Research Center (MRC) examined the news programs of the major broadcast networks (ABC, CBS, and NBC). Remarkably, these biased networks gave President Trump 92% negative coverage. According to the MRC, this is consistent with the type of negative coverage President Trump has received for the last several years.

As this presidential race ends, the contributions that the media and big tech have given to Joe Biden are immense. From the bias to the censorship, there has never been a greater contribution given to any presidential candidate in our nation’s history.

Whatever happens in this election, our country is in danger if these media and big tech behemoths continue to manipulate public opinion to such a great extent. In communist nations, the press always provided the public the government position and no dissent or diversity of opinion was allowed. In our country today, the press presents the viewpoint of the Deep State, the Democrats and the globalists who oppose President Trump.

In communist nations, most people eventually were able to discern the bias and manipulation of their state media and the iron curtain crumbled. Likewise, let us hope and pray most American voters disregard what the media and big tech have done in this election and re-elect President Donald Trump to another term.

Jeff Crouere is a native New Orleanian and his award-winning program, “Ringside Politics,” airs locally at 7:30 p.m. Fridays and at 10:00 p.m. Sundays on PBS affiliate WLAE-TV, Channel 32, and from 7-11 a.m. weekdays on WGSO 990-AM & www.Wgso.com. He is a political columnist, the author of America's Last Chance and provides regular commentaries on the Jeff Crouere YouTube channel and on www.JeffCrouere.com. For more information, email him at jeff@jeffcrouere.com.