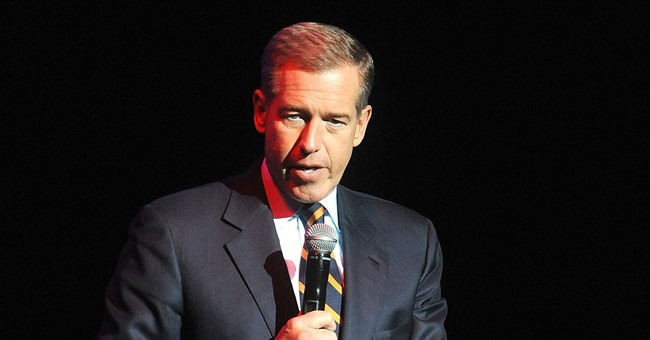 After an extensive investigation, NBC News finally decided the fate of habitual liar Brian Williams, who has been on an extended suspension since February. In the end, they made a brilliant decision by removing him from the anchor chair at the “NBC Nightly News” and demoting him to MSNBC, their embarrassment of a cable news network. Williams will join other chronic liars, such as the Reverend Al Sharpton, on the cable news network that has turned into a ratings disaster.

MSNBC has a pathetic number of viewers for a national news network, usually about 500,000 per night. This is only 5% of the massive audience that regularly tuned into Williams on the “NBC Nightly News.” This journalistic wasteland is an ideal home for Williams, who destroyed his credentials as a reporter when he started lying about the major events he covered.

Williams will lose his lofty NBC position and face a reduction of salary from $15 million to $10 million per year. On MSNBC, Williams will handle special reports and anchor breaking news coverage. While it is astonishing that he still has any journalistic position and will be earning such a salary after his downfall, the reality is that Williams will be working for MSNBC, a network watched mainly by liberal zealots. Williams survived because he is also a liberal. Unquestionably, a conservative in a similar position would have been quickly fired with no hesitation.

As part of his return to the limelight, Williams is starting an apology tour. His first interview was with his friend and colleague Matt Lauer on the “Today” show. He confessed to Lauer that his lies were mainly “ego driven.” He admitted that his suspension has been “torture,” but, unfortunately, he refused to elaborate on all of the different falsehoods he told over the span of several years.

The most egregious lies that Williams invented involved his helicopter coming under rocket propelled grenade attack during the initial stages of the Iraq war. In addition, he almost certainly lied about a number of other stories, including his report of flying into Baghdad with the Navy Seal Team 6. While he was one of the first reporters in New Orleans after Hurricane Katrina and the scenes he witnessed were surely devastating, there is little doubt that Williams once again exaggerated his reporting.

He suspiciously claimed to have seen a dead body float by his hotel window in the aftermath of the levees breaking and the streets flooding. Unfortunately for Williams, everyone from the hotel manager to the city’s public health director to retired Army Lieutenant General Russel Honore, who coordinated the military’s hurricane relief operations, has disputed his statement. A thorough analysis of his many exaggerations and lies would undoubtedly include multiple incidents over the span of many years.

Obviously, this creative storyteller will have zero credibility with informed viewers, which is why the move to MSNBC makes sense. No viewer who watches hosts such as Ed Schultz, Rachel Maddow or Chris Matthews expects honest reporting. All viewers see on MSNBC is hard core liberal activism disguised as journalism.

Through his years of lies, Williams showed a callous disregard for the viewers who entrusted him to truthfully report the news. As an anchor with a propensity to lie and exaggerate, Williams has now been assigned to a network worthy of his talents.