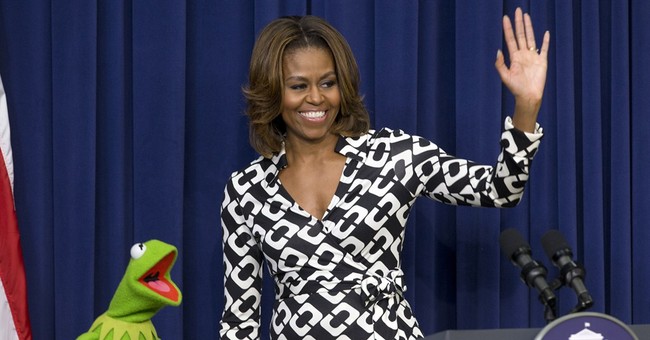 First Lady Michelle Obama is not content nagging Americans about their food choices. She has now decided to lecture us about our word usage. Along with pop star Beyonce and actress Jennifer Garner among others, the First Lady is urging Americans to ban the word “bossy.” She believes that use of the word somehow inhibits young girls from becoming leaders.

This whole effort is typical of liberal campaigns to lecture Americans about everything from their diet to their healthcare choices. Far too many of these liberals believe they know what is best and need to offer such guidance for the typical American is overweight, ignorant, sexist and racist.

It is clear that liberals like the First Lady desperately want to limit freedom in the march toward increased government control. In fact, the whole concept of freedom threatens liberals, so they constantly attack it. The problem for liberals is that the United States of America is the “land of the free” and our country was founded on the concepts of liberty and freedom.

It seems the First Lady and her friends would be more comfortable in a communist or totalitarian system. In fact, this whole movement is reminiscent of Orwell’s classic novel, 1984, in which a totalitarian government banned words and engaged in thought control.

These are quite Orwellian times in our nation; however, it is ironic that these activists are so concerned with the word “bossy,” but obviously unconcerned with the way Beyonce’s husband Jay-Z and other rappers treat women. These so called artists regularly refer to women in the most vulgar and obscene terms. It would be much more constructive for these elitists to focus on the horrible treatment of women in rap music instead of trying to ban words.

In a free country, words should not be “banned.” It is fine for polite society to discourage the use of profanity and degrading terms such as the “N-word,” but “bossy” is neither vulgar nor derogatory. It is also not a word that describes only girls or youngsters.

This misguided effort is being organized by a group called LeanIn.org, a leftist website which claims that “girls are less interested in leadership than boys and that’s because they are worried about being called bossy.” In reality, it is highly doubtful that young girls are making such complaints. Overall, this campaign is absurd, offensive and truly laughable.

What the “ban bossy” movement displays is that liberals are always trying to discount the innate differences between the sexes, which are regularly displayed among boys and girls in classrooms throughout the country. Sadly, for Mrs. Obama, her activism will not be able to override biological facts. Research shows that boys tend to be more aggressive and talkative, while girls are more passive and less likely to get into trouble at school.

It should come as no surprise that boys ask more questions in class and assume more leadership positions in school. This does not mean that boys are smarter or have a greater chance to succeed in the business world; it only highlights the fact that boys and girls are different and no amount of liberal re-education will change that law of nature.

This feminist crusade overlooks what is really happening in our country. Contrary to these ridiculous claims, American young women are prospering quite nicely. Recent data shows that females comprise the majority among students attending colleges, graduate schools and doctoral programs.

To continue to succeed, girls don’t need liberals to ban words, just get out of their way. Ironically, the more the word police try to help young women, the more they will hurt them as liberalism never solves any problem, another irrefutable law of nature.