The Last Stand of the Redskins 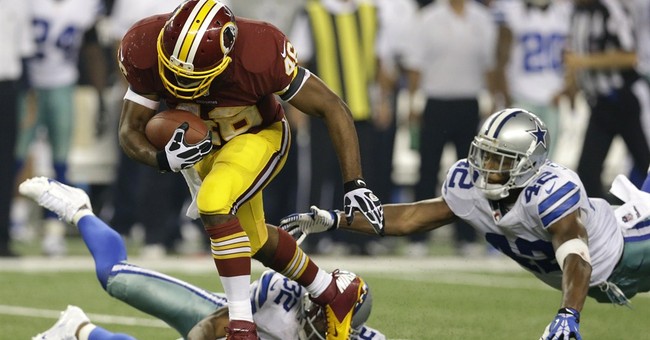 The politically correct forces of liberalism have found a new target, the Washington Redskins. Never mind that the team nickname has an 80 year history, all knowing white liberals believe that the term Redskins is somehow offensive to Native Americans.

This belief is rooted in liberal imagination, not reality. Polls have consistently shown that 90% of Native Americans are not upset at the Redskins name. In fact, the nickname was adopted to pay homage to four Native Americans who played for the team at the time. The supposedly offensive logo was designed by a Native American as a way to honor their heritage, not show disrespect.

Today, liberals have decided that all nicknames related to Native Americans need to be removed. So, while liberals are now targeting the Washington Redskins, tomorrow they will be criticizing the Atlanta Braves or the Chicago Blackhawks. These politically correct activists have been quite successful on the collegiate level. The Stanford Indians are now the Cardinals, while the St. John’s Redmen are now the Red Storm, a ridiculous moniker.

Even our President, who should be focused on reviving our moribund economy, commented that he would consider changing the name if he were owner of the team. Of course, Barack Obama has never owned a business, and he knows very little about how to operate one, but that is another story.

The Redskins debate intensified when NBC sportscaster Bob Costas decided to use his halftime editorial during last week’s edition of Sunday Night Football to condemn the team nickname. Last December, during another Sunday Night Football broadcast, Costas made headlines when he editorialized that the suicide death of Kansas City Chiefs star Jovan Belcher was due to the proliferation of guns.

Last Sunday, the liberal Costas was on his political soapbox once again, claiming that the Redskins name is a “slur” that needs to be changed due to current sensibilities. Of course, Costas believes that only liberals determine the names that need to be changed in today’s sensitive, politically correct, environment. Ironically, Costas exposed one major problem in our society today. There is entirely too much concern about sensitivity. Too many Americans are perpetually offended and feign supposed outrage on a wide variety of issues.

What Costas started has now been picked up by other news outlets. A cartoon in the New York Daily News compared the Redskins logo to the Nazi swastika and the Confederate Flag, labeling them as “Archaic Symbols of Pride and Heritage.” The editors of the Richmond Free Pressdecided that the name Redskins will no longer be used in their coverage of the team. In their view, the term is “racist.” Once again, we hear from liberals what qualifies as racism, a term that is used so often that it long ago lost its meaning.

Fortunately, the Redskins team’s owner, Daniel Snyder, is not backing down. He pledges to keep a name that he considers a “badge of honor.”

If he continues to stand firm, he will be subjected to relentless pressure from liberals like Costas and President Obama. He will also face heat from the left wing media and the NFL, a politically correct organization. The league Commissioner, Roger Goddell, already has started to lobby Snyder. He commented that he knows that Snyder “wants to do the right thing.” In other words, the owner better change the name.

It is the last stand of the Redskins; will they suffer the same fate as George Custer in the Battle of Little Bighorn? Hopefully, in this case, as in the famous battle, the Native Americans will prevail and the proud name will live on, not as a symbol of hate, but as a “badge of honor.”