Jason Killmeyer
|
Posted: Apr 07, 2021 12:01 AM
Share   Tweet
The opinions expressed by columnists are their own and do not necessarily represent the views of Townhall.com. 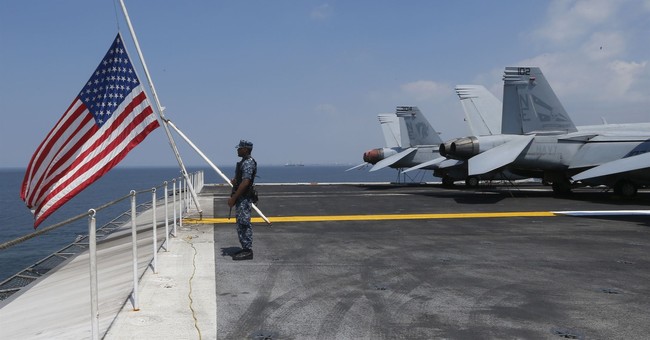 As Russia presses on Ukraine and China escalates tensions with the Philippines, the United States is courting unnecessary risk. While our greatest risks still stem from a series of rising domestic radicalisms, the danger from beyond our borders won’t forever accommodate our turned eye. A decade plus, bipartisan-blessed era of inward focus has resulted in doubt domestically as to where our red lines really are. Not necessarily where our alliances and commitments stand on paper, but where they will stand in practice. Which foreign capitals are our divided citizenry willing to sacrifice for in 2021? What about after our next contested election, given that we seem to be gearing up for another one in 2022?

The formal answers that we’d receive from our Press Secretary if asked today aren’t necessarily the real answers, even if she had time all the time she wanted to “circle back.” If we look back at the past decade of foreign policy, one of the major outputs is opacity. Here in early April, no one in the country can speak credibly about where our red lines are, because collectively we don’t really know. Our waves of internal instability have upended lots of expectations, casting core foreign policy assumptions in doubt, a doubt that remains largely unexplored. And if we don’t know where our red lines are, then our adversaries don’t know. That’s where the risk is, especially as they test for answers.

While looking back, a few anecdotes might highlight this confusion. We chose not to intervene more significantly in Syria, a move that saved Western lives and treasure, but incurred costs realized in waves of refugees and complex terrorist attacks planned from a safe haven there. An associated cost was clearing the path for other powers to get a taste of direct intervention. How will we respond in the next revolution or the next capture of territory by militant Islamists? How will those regional powers? Is the Responsibility-to-Protect (R2P) doctrine still viable or is it buried and dead?

Last year, the national security law in Hong Kong provoked much international outcry, described accurately as a nail in the coffin of the region’s remaining autonomy. That outcry resulted in pressure on China, sanctions against a limited number of officials, and little else. Recognizing that small cost, or recalling the minimal consequence for militarizing a string of islands in a strategic waterway, China recently announced a stifling elections law in Hong Kong, and again was met with a list of sanctioned leaders. Pardon, but they do not seem deterred. China is currently obfuscating the investigation into a pandemic that killed more people than any armed conflict this century save for the Congo, and running modern and efficient concentration camps. The world responds with harsh words, and it becomes hard not to imagine Xi sliding left on his calendar the move for Taiwan.

I mention the above explicit, demonstrable failures of the international community not to argue for a renewed era of American or Western hawkishness, America was a free and prosperous nation before unipolarity and it can be one afterwards if that’s the path it chooses. Instead, let’s recognize that if the U.S. is not willing to be aggressive in these extraordinary circumstances, it’s no longer clear for what effort or threat it can be marshaled. As our position on the board becomes harder to articulate, big chess pieces will start to move.

Nor can we mistake the current administration’s “We’re Back” proclamations and funding of certain international institutions as even a partial answer to these questions. They create no tangible effect other than to increase the affection of our Western European allies.

We need to test our internal consensus before an adversary does. No one wants to talk about foreign policy these days other than to dunk on their domestic political opponents, but we need to. Not knowing the answers to these questions will not preclude us from being forced to answer them, likely at greater than necessary cost. The smartest thing the United States can do for its security right now is to recognize that the international narrative is lost and to develop and then articulate red lines in bold and all caps. Here’s what we’ll stand for, here’s what we won’t, and ‘cc’ the world on the email.