Jason Killmeyer
|
Posted: Jan 04, 2021 9:15 AM
Share   Tweet
The opinions expressed by columnists are their own and do not necessarily represent the views of Townhall.com. 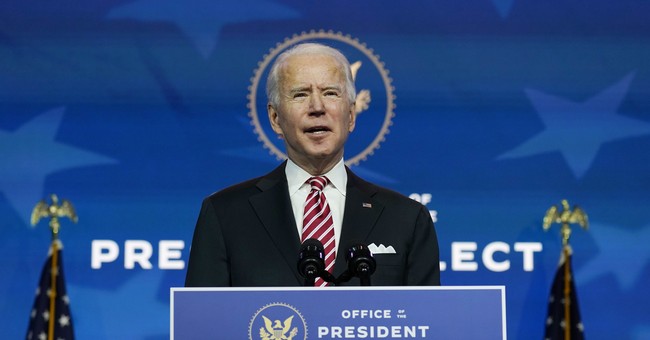 Long in political rhetoric have presidents been described as illegitimate, as of low character, as sexual deviants, or even foreign pawns. Not before in our history has an existing federal schism resulted in major legitimacy concerns plaguing four presidents in a row. Concerns that lean away from character attacks and lean towards refusal to accept the authority of the man in office and, in effect, rule under the office itself. This is relevant because, as I stated back in May, our inaugurations serve technically to swear in the new head of the executive branch, but in the popular imagination they also essentially grant the authority of the federal government writ large to continue operating.

George W. Bush faced the stolen election legitimacy trope for years. It was widely touted at the 2004 DNC convention, it limited W's room for maneuver in office and kicked off the modern anti-Electoral College movement. The Birther conspiracy was not conventional Republican doctrine, but it found purchase with a non-minor percentage of the population over the course of eight years. More importantly, it served as the launchpad for a presidential campaign. Trump’s move there was similar in some regards to how Stacey Abrams used her dangerous and ahistorical refusal to concede in 2017 to launch herself to national prominence, or how the campaign against Justice Kavanaugh was meant to delegitimize his judgeship and any resulting 5-4 votes. This is relevant because, as I stated back in June, the era of asterisking will have real life consequences.

In 2016, the very president whose legitimacy was targeted by the birther conspiracy presided over one of the messiest transitions of power in our history. Yes, Hillary did concede, but her and the Obama administration's efforts to kneecap the incoming administration relied on explicitly casting doubt about the fairness of Trump’s win, as outsiders like Jill Stein sued for recounts in states and celebrities cut infomercials urging state electors to ignore their states' results and vote for Hillary. Major numbers of Democratic Party voters believed actual vote tallies had been tampered with, as the red meat the Democrats tossed to their base created an impression - evidenced for years in polls, that Donald Trump had not won the contest fair and square or, more specifically, due only to active intervention by foreign powers. These efforts didn’t just lead to a mass movement called "the Resistance” or actively limit Trump’s domestic room for maneuver, they succeeded in casting Trump as illegitimate to a significant portion of the population, who rejected presidential authority and literally cheered the coopting of executive branch authority by other figures who would hinder or subvert the president’s impulses (Mueller, Anonymous, Fauci) in ways that have set dangerous precedent. That precedent is particularly relevant because, as I stated back in August and again in September, the U.S. is embracing a rawer form of majoritarian government in which presidential decree resolves problems reserved for the legislature and both the parties and the people have accepted it.

The above paragraph provides an admittedly slanted history not to win a round of what-about-ism but instead to paint the political events of the past 20 years in a different light. We are about to have our fourth president in a row plagued by legitimacy concerns of some type. If these continue to escalate, we will have bigger problems. For those of you who are hoping we can return to what you may term normalcy, there is no reason to be heartened. 2020 was not the end of our destabilization, it was a big wave but those waves are still cresting. There is little reason to believe Tuesday’s Georgia runoffs featuring conspiracist Stacey Abrams and the ever-shifting rules there will be resolved smoothly, or that the corrective typically provided by the midterms will be anything other than a miasma of late-flipping seats and delayed results. How confident are you, readers, that the ’24 presidential election will go any smoother than this past one coming to its final result this week?

A bitterly divided nation can’t agree on the rules to conduct its elections, and legitimacy concerns are now a prominent feature of opposition efforts and will remain dangerously so. They are a symptom of our current instability, not the cause, and will continue to get worse for the time being. But the greater risk is now pairing these with an executive branch that is about to go into overdrive, the first test of which will be the federal mandates Biden intends to announce in a historically aggressive first 100 days. Instead of just focusing on gridlock or how the asterisk next to Biden’s name will limit his domestic room for maneuver, we need to focus on the greater risk: a breakdown in the general order over the next few years as legitimacy concerns and maximized federal power clash.