Our Endangered Transfer of Power

Jason Killmeyer
|
Posted: May 10, 2020 12:01 AM
Share   Tweet
The opinions expressed by columnists are their own and do not necessarily represent the views of Townhall.com. 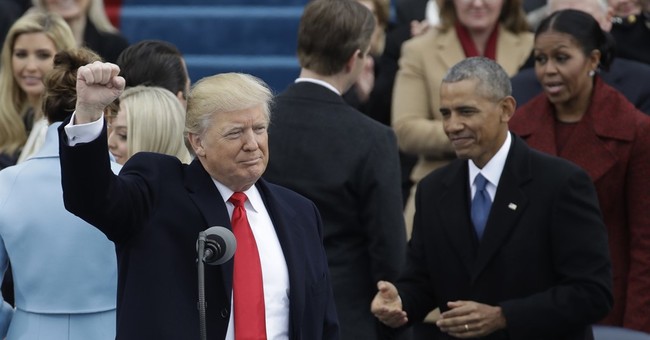 In the recent popular memory of many of those who engage in pop politics, we think back to the transition between Bill Clinton and George Bush and the removal of the “w” keys from staffer’s keyboards after a contentiously determined election. That was contrasted by the mutual comity between W and President Obama, the latter grateful for the professional and thorough job done by the Bush administration. Towards the end of his term, Obama pledged to continue in that high spirit, assembled a team of capable professionals, and then – in a major element of his legacy – was at the helm for one of the least clean transfers of power in American history.

In a country so divided it’s now a weakness our enemies can play to, President Trump joined his two immediate predecessors to become the third U.S. president in a row plagued by widespread illegitimacy claims. The 2016 election is still perceived by many as tarnished by foreign intervention, and saw voters spontaneously take to the streets in protest of the results, violence during the inauguration, and multimillionaire entertainers campaigning openly for state electors to ignore the public and overturn the results of the election. Imagine.

Two years later, a gubernatorial candidate stated without evidence that she lost her race due to voter suppression. Despite the facts she persisted, nevertheless, refusing to concede an election as a means to launch a bid to become one step removed from the presidency. It’s unclear whether, if she makes the ticket as vice president, she’ll be inclined to accept this November’s results. In that same election season, House races supplied added jolts as ballots were counted weeks after election day. In California, they all went in one direction, erasing election night leads just two years after state laws were changed to make ballot bundling easier. Who needs gerrymandering when you’ve got this? This is not what we’re used to: seeing night-of returns in races all flip consistently for one party in the weeks after the vote, having major candidates simply refuse to concede a race, or state supreme courts intervening in congressional maps. Whether or not there was provable impropriety in any of these instances, they have not set the stage for a smooth 2020 election.

We take that weighted history into and with an election season and populace to which all the worrisome adjectives correctly apply: bruising, norm-breaking; polarized, divided. Sports and movies and the other cultural touchstones that might traditionally soften the rough edges of an election season may not be with us. Institutional trust is low, and our statesmen and politicians do not appear to be the cooler heads that will prevail. The risk of a contested election was already high, and the specific mediating institutions and mechanisms for navigating that situation we’ve relied on in the past are less likely to provide a result most Americans will accept because those institutions and mechanisms are themselves less trusted. We live in an era of impeachment as standard practice, censure of Cabinet members, and an executive branch that essentially creates law. We are running out of parliamentary maneuvers via which to settle our disputes.

If that sounds like hyperbole, ask yourself: what percentage of Americans will later this year accept a Bush v. Gore-like decision given a Supreme Court seen to be, and deliberately maligned as, partisan? How will the same populace that took to the streets election night 2016 respond that Wednesday in November when neither candidate has conceded? How will those unnerved by the late turning of those 2018 House races respond if a late Tuesday night, approaching 270-lead is slowly reversed in the up to thirty days some state’s result certification deadlines allow? How will America behave as Thanksgiving, and even Christmas, approach and we still don’t know who will occupy the White House? Does anyone believe we’ll handle a hanging chads situation as well as we did in 2000?

This is the danger inherent in the $400 million in supplemental funding provided to the Election Assistance Commission in the CARES Act, presumably for states to embrace widespread adoption of vote-by-mail for the first time in American history. How could grants meant to secure and assist elections in this time of crisis be a bad thing, and how could vote-by-mail be championed by wholesome activists like Tom Hanks and former attorney Michelle Obama if it presented risk? Put simply, it is too new for too many, it is too close in, and we are too divided.

In an era in which Bush beat Kerry in Ohio 51/49 percent, or Trump’s margins across what some call the Rust Belt were exceedingly thin, the rollout of widespread vote-by-mail ballot casting and collection as the primary mechanism for participating in our election introduces unacceptable uncertainty. We often read that about 25 percent of votes in the 2016 election were cast via absentee ballot, and that five states have “all mail voting,” which means only that all registered voters are provided a ballot in that fashion, not that it’s the primary means for ballot casting in that state. We hear that many other states allow vote-by-mail in some capacity. The sum total of each of those individual numbers is this: the vast majority of Americans do not vote this way.

The push for massive vote-by-mail is misguided despite the significant countervailing risk of a very low turnout election. But what Abrams, Hanks, and Michelle are pushing us towards is staking the legitimacy of the election on accomplishing a long-held goal of the Democratic Party to return to the days before the secret ballot, and on the expansion of a voting method a large majority of Americans haven’t used. And the plan is to claim that any other path forward will constitute unacceptable voter suppression.

The 2020 election is fast approaching. If we end up with a landslide, we should be OK; the anti-Electoral College movement will be noisy but is a few election cycles away from being a governance threat. Our inauguration serves to staff key positions in one branch of government but it also, in the minds of many Americans, serves as a de facto reauthorization of the federal government to operate. The transfer of power implies that we’ve provided it, and without that landslide there is an elevated risk that transfer is called into question. In that environment, the distance between November 3rd and January 20th is vanishingly short. In that span we may be called upon to resolve a dispute that will impact both the ability of the executive branch (the grantee) to be effective and the degree of legitimacy Americans (the grantors) accord to the federal government writ large.

Our risk calculus is off. This is not the time or place in our history to rollout widespread changes to how Americans vote, no matter how painfully outdated certain elements of our current processes are. Rolling out a new form of voting that many Americans have never used before, and that is susceptible to tampering and manipulation in ways that in-person secret ballot casting is not, will make nearly certain that the most important election outcome to avoid in 2020 comes to pass: that we go to bed the night of November 3rd not knowing who won.