Jason Killmeyer
|
Posted: Nov 03, 2020 12:01 AM
Share   Tweet
The opinions expressed by columnists are their own and do not necessarily represent the views of Townhall.com. 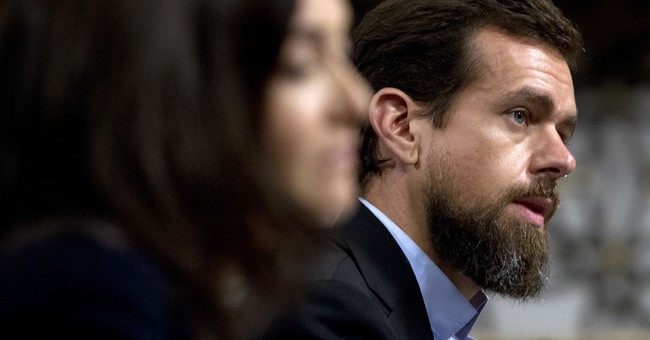 In less than four years, and with only a trial run in California in 2018, each of the major institutions of the Left have made their parlays and accomplished one of the great feats of social engineering in modern history. When the wrong candidate was elected in 2016, the Left decided it was time to fundamentally change how we elect presidents and successfully conditioned the populace to get on board.

After running up early vote totals in 2016 but getting trounced by an enthusiastic day-of turnout for President Trump, we’re now told simultaneously that the early vote again belongs to Democrats but so will the late vote, so we can’t be fooled by a Red Mirage of, you know, actual voting on Election Day.

Industry titan and political activist Jack Dorsey – taking his cue from wealthy magnates throughout American history – weighed in aggressively to suppress certain viewpoints, wielding his power to shape the nation’s discourse in his preferred direction. In releasing the name of the Anonymous author, digital subscription service New York Times revealed only their own partisan affiliation as evidenced by the less-than-senior role the saboteur occupied. That they felt comfortable doing so when it’s clear to the unbiased that they misled their readers tells us how they read the political moment, and their keen understanding of their forgiving subscriber base.

We refer to these organizations derisively as gears of the Democratic party machine, but that’s wrong. Just as we’ve seen a decline in the relative power of the political parties vis-a-vis their populist base, that same decline in relative importance reveals itself in the ascendance of pundits, news organizations, and activist CEOs as the trio of power in politics.

None of this is to unnecessarily demean these organizations for choosing sides so explicitly. In prior times of great division, institutions did the exact same thing. They lined up and they chose sides. We here on the Right spend too much time lamenting the hypocrisy of institutions that formerly held a broader societal place: the Old Grey Lady, the Motion Picture Academy, etc. It’s disappointing to see what they’ve become, but there are no sidelines anymore. Much like the Civil War when a divided American press served their respective audiences, we now have a press more likely to stir conflict than report sternly and objectively on it. We may one day see a recovery of these institutions like we did in the aftermath of the Civil War, where the absolute necessity of timely and objective reporting – aided by the telegraph – was demonstrated again to the people. Until then, the media are part of the fray, not above it.

Make no mistake what has been accomplished: the Left has aggressively shaped the electoral process to their advantage and succeeded in getting at least half the country to believe that any Trump victory is illegitimate. Biden, when taking a break from stirring anti-vaxx passions, has warned that Trump will try to steal the election, and Hillary claimed a Trump victory could not happen within the rules. These are the senior leaders of the party telling us that any claim at victory by their opponent is tyranny made flesh. As the experts daily warn us not to expect election results in a timely manner, they repeat faithfully the talking points of Democratic data analytics firms and Democrat-led transition integrity expert groups and former senior Democratic party staffers turned journalists. The narrative framing has been accomplished. The people have been conditioned, and reassured, and told not to worry – elections are only over when the correct result is reached.

And so now we head into an era of potential conflict, having finally realized where we are, where they were leading us ever since 2016: the Right has lost the pre-election season – what in more antiquated times was called a campaign – and all that’s left to see is if Election Day still matters. This morning on your way to cast your vote, as you walk past a storefront boarded up due to fears of left-wing violence, or the church that’s not allowed to hold services, remember the lessons to carry with the 2022 midterm campaigns kicking off about 14 months from now.