The Young Lose From a Higher Minimum Wage 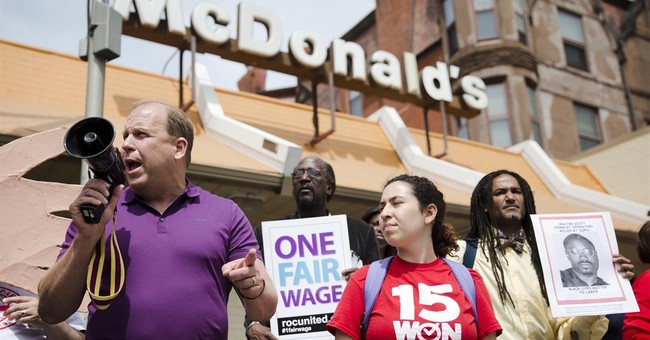 Editor's note: The following is adapted from Disinherited: How Washington Is Betraying America’s Young (Encounter Books: May 12, 2015, which was co-authored by Diana Furchtgott-Roth.

Warm weather is coming, and with it the perennial student search for a summer job. Though often seen as an economic cure-all, minimum-wage requirements have the unintended consequence of decreasing economic opportunity for young workers and making that treasured summer job harder to find.

Over half of those who earn at or below the minimum wage are between the ages of 16 and 24, many in the hospitality and leisure sector. Since the majority of those earning minimum wage are younger workers, increases in the minimum-wage rate affect them the most. Negative effects extend into the future, because young people often use minimum-wage jobs as steppingstones to better careers.

Businesses have to pay at least the minimum wage, but 97 percent of working Americans make more than minimum wage. This is not out of the kindness of employers’ hearts, but because that’s the only way they can keep employees from leaving.

But when the minimum wage is raised through statute, employers always have the option not to hire young and low-skill workers. They can replace their less-skilled workers with more-skilled ones or with machines. They can close down and move into some other line of business, as some restaurants have done in Seattle. They can replace rental space in a building with a food truck, which is one reason why city streets have seen a boom in food trucks over the past six years.

Some restaurants are installing tablets on their tables to substitute for waiters. Tablets work for free and they don’t go on strike. They can increase orders because they have faster turnaround times and do not look down on diners such as the authors who enjoy high-carbohydrate meals and desserts. The restaurant chain Chili’s has just invested in 45,000 tablets for its 823 restaurants. Some high school students and recent graduates are now unemployed because of Ziosk tablets. These young people need more education before they can compete with more-skilled workers for higher-paying jobs.

In 2014, the Congressional Budget Office estimated that half a million employees would lose their jobs by 2016 if the hourly federal minimum wage rose to $10.10, although the report included the possibility that up to 1 million workers could become unemployed. The report acknowledged the obvious—raising the minimum wage increases wages for some people, but, in exchange, prices inexperienced workers out of the labor market.

Even with the current minimum wage of $7.25 an hour, we are condemning some teenagers to unemployed summers and a lack of work skills that are necessary to develop human capital. Raising the minimum wage to $10.10—a 40 percent increase—would make it even harder for young people to gain real-world experience, because employers would be even less able to hire them. In 1974, in 1984, and even as recently as 1994, about 55 percent of 16- to 19-year-old workers sought employment. By 2004, the percentage had declined to 44 percent. Now, it is about 33 percent.

This is not where America wants to be. Young people are discouraged by the lack of job opportunities and are dropping out of the workforce. Only 55 percent of young people ages 16 to 24 are participating in the labor force, compared with 66 percent in 2000, a decline of 11 percentage points in less than 15 years. To put this in perspective, if labor-force participation rates remained at 2000 levels, more than 4 million more young people would be in the workforce.

If lower youth labor-force participation were explained by young people spending more time in school, the decline would be less worrisome. More schooling would mean that young people were investing in skills for future high-paying jobs—good news for them and for the economy. But the percentage of 16to 24-year-olds enrolled in high school, college, or university has barely changed over the past decade, rising from 56 percent to 57 percent.

Those who want to raise the minimum wage (or raise the wage for tipped workers, which is now $2.13 an hour) generally have the best of intentions. But when policymakers and pundits pretend, as they often do, that increasing the rate would have no negative effects on inexperienced and low-skill workers, they are misleading the public. If minimum wages had no effect, why stop at $10.10? If an increase can lift people out of poverty without harming anyone else, it should make sense to raise the wage to $20.70 an hour, the average for nonsupervisory employees, or even higher. The reality, of course, is that many people would not be employed if the hourly rate were this high—just as some will not be employed with an increase in the wage to $10.10.

As is the case with many well-intentioned policies, those who lose from higher-minimum-wage laws are the young or low-skilled. For all those kids going from store to store looking for a summer position: don’t let the minimum wage get any higher.

Diana Furchtgott-Roth is a senior fellow and Jared Meyer is a fellow at the Manhattan Institute. This article is based on their new book, Disinherited: How Washington Is Betraying America's Young (Encounter Books, May 2015). Follow Diana on Twitter @FurchtgottRoth and Jared @JaredMeyer10.