How A 96-Year-Old Law Has Jeopardized America's Ports 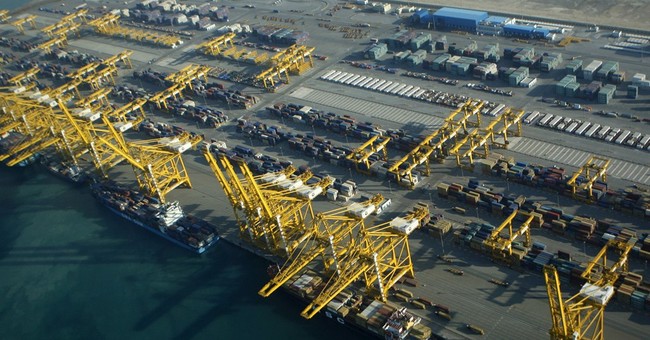 Recent slowdowns at West Coast ports, the result of ongoing labor disputes, are jeopardizing the more than $2 trillion in cargo that pass though these ports each year.

The slowdowns are not the only way U.S. maritime shipping unions are holding back the American economy. Most Americans have not heard of the Merchant Marine Act of 1920, also known as the Jones Act, but this piece of antiquated legislation increases costs for American consumers and discourages domestic business investment.

The Jones Act is a federal statute that requires all goods transported by water between U.S. ports to be carried on ships built in America, owned by citizens, and crewed by U.S. residents.

The law is named for the early-20th century Senator Wesley Jones, a Republican from Washington. Jones facilitated the law’s passage to secure his state’s role in transporting goods to Alaska. Is it any surprise that a senator from a coastal state, with many voters and potential donors employed by a large ship-building industry, was in favor of a law that kept out foreign competition? For the same reason, senators today from coastal states fight to keep this ancient law on the books. The shipping industry lobby is so powerful that when Senator John McCain (R-AZ) attempted to reform the Jones Act in 2010, he lamented, “I don’t think I would get 20 votes if I were to bring [Jones Act repeal] to the floor.”

Contrary to the claims of Jones Act supporters, the law does not increase economic growth. A select few benefit, but most consumers lose. Proponents of the Jones Act fail to see the wider picture and do not take into account higher consumer costs due to uncompetitive practices. More expensive products reduce demand, putting strains on consumer spending—the main driver of GDP growth.

To highlight the absurdity of this law, consider goods being shipped from Japan to the Hawaii. Foreign ships must pass Hawaii on their way to San Francisco, so an American ship can take that cargo and bring it back to Hawaii. No wonder Hawaii has the nation’s highest cost of living, 12 percent higher than second-place Connecticut.

The Jones Act’s effects are felt beyond Hawaii. Take last year’s salt shortage in New Jersey. After spending much of the winter battling severe weather conditions, the state of New Jersey was close to exhausting its supply of road salt. Schools and roads were going to be closed, and economic activity in the state was going to grind to a halt. Thankfully, there was a 40,000-ton load of road salt sitting at a port in Maine. A foreign-owned vessel had recently unloaded a shipment in Maine and was available to bring the salt to New Jersey.

One problem—because of the Jones Act, the vessel was stopped by federal officials. The salt never came, and New Jersey residents had to wait for the sun to melt the ice. Similar situations will undoubtedly be seen across the United States this winter.

Even national tragedies are insufficient to overcome the interests of the U.S. shipping industry. Cleanup efforts for the April 2010 Deepwater Horizon oil spill were slowed down as foreign-flagged skimmer ships were prevented from assisting in the cleanup. President Obama’s hesitancy to temporarily waive the Jones Act in this extreme circumstance likely came from his desire to please labor unions, who are among his (and the Jones Act’s) biggest supporters. The AFL-CIO lobbies intensely to preserve the Jones Act, along with the International Longshore and Warehouse Union, the same union involved in the current West Coast port dispute.

Instead of helping U.S. shipping, the Jones Act makes it less competitive. By stifling all foreign competition, the Jones Act reduces incentives for domestic companies to innovate and grow. In addition to salt for New Jersey and the Deepwater Horizon oil spill cleanup, every day countless trades are foregone or business deals are moved overseas because of the low supply and prohibitively-high cost of U.S. shipping.

Imagine how expensive flying would be if only planes constructed in the United States, owned by U.S. citizens, and crewed by U.S. permanent residents could transport goods and people between American cities? Or, what if all trains had to be built in the United States and all taxis had to be U.S.-made and owned and operated by U.S. permanent residents? In these cases the costs to consumers are apparent. On the other hand, most Americans do not ride on industrial cargo ships. With the Jones Act, the negative economic consequences are felt in daily and in small amounts—when purchasing anything that was transported by water, in whole or in part.

Between 2006 and 2011, wages for seafarers increased 22 percent, compared to 12 percent for other transport workers and 15 percent for the U.S. average. Compensation is artificially inflated because of industry protections conferred by the Jones Act. This is a major reason why the supply of U.S.-flagged merchant ships has steadily decreased over the past 50 years.

Why has this clearly protectionist law, which only benefits a select few ship builders and crew, not been repealed? It turns out that defeating powerful lobbies such as maritime shipping unions makes destructive laws difficult to repeal.

The West Coast port slowdowns highlight the critical contribution trade makes to economic growth. Reform of the Jones Act is long-overdue. Despite cries of necessity from its supporters, the Jones Act does nothing more than protect politically-powerful maritime shipping unions at the expense of the rest of America.