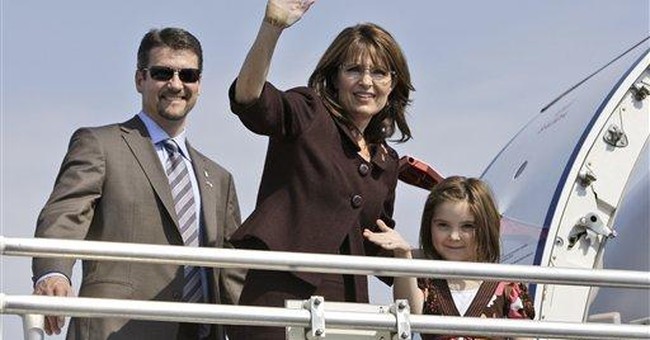 In the South, where I grew up, you can get away with saying just about anything about anybody as long as it is prefaced with the obligatory confection, “Bless her heart.” Often awful things are spewed out in the guise of sympathy and compassion for a person, such as “She’s such a sweet person ... bless her heart ... but she hasn’t got enough sense to come in out of the rain.” The attacks on Sarah Palin have entered the “Bless her heart” territory. Everybody, to hear the mainstream media tell it, feels sorry for Sarah.

The reaction has followed a tediously predictable pattern. While the choice of Palin energized her party and motivated conservatives to work for the ticket, her selection scared the daylights out of the feminists and the left, who subjected her to viscous personal attacks — scorn for her beauty pageant looks and supposedly out-of-date hairstyle, disdain for her previous jobs as mayor and governor (never mind that the office of the governor of Alaska is one of the four most powerful chief executive positions among all the states), and patronizing remarks about her family of five children (one of them with Down Syndrome and another pregnant out-of-wedlock, though planning to marry the father and have the baby). She was nothing but a “hockey mom,” or, to hear one description, “a pig in lipstick.”

Oh, the horror of living out your pro-life beliefs by walking the walk that the woman and her husband have promoted all of their adult life. Oh yes, I forgot to say that the woman is an evangelical Christian whose faith is in the theological mainstream. The latest leftist rant against Sarah is about an African pastor who prayed over Palin years ago and prayed for her protection against witchcraft (the African version of evil — which the reporters would have known, had they basic knowledge about Christianity or done even basic research about the Christian faith as practiced internationally).

Some leftists exude such visceral hatred for Sarah Palin that it leaves me stunned — even though I’ve spent the past 15 years countering radical feminism. The rage is mindless and irrational. I could possibly understand the left’s opposition to her pro-life views, her traditional-heterosexual-married lifestyle and even her Christian beliefs, but the blind hatred and rage against someone whose views differ from your own is baffling — unless, of course, there really is a cultural war going on in which people with diametrically opposite points of view stemming from drastically different values are vying for influence in society, for the minds and souls of the nation’s children and young people and, ultimately, for determining the future direction of the nation.

Feminists, who supposedly worked for women’s equality and opportunity, began by arguing hypocritically that Palin, a wife and mother, couldn’t possibly “do it all” without neglecting her family. When that backfired on them, they turned to pity: “Poor, pitiful Palin, the backwoods babe can’t handle the big time.” Palin became the brunt of late-night comedians’ jokes, and Tina Fey took a career detour to poke hilarious fun impersonating Palin’s speech patterns and comments — including her rambling response to a question in the Katie Couric interview. So we’re at the point where Palin is the object of pseudo-pity and crocodile tears from the left, along with some nearsighted conservatives who claim that, ‘bless her heart,’ she is just not up to the job.

Suddenly, everybody is exuding sympathy for “poor Sarah,” who makes them “cringe” when she is not a walking encyclopedia. The pundits are now turning the tables and blaming McCain for choosing her; it’s his fault that he is “using her” for his political purposes. Poor woman! Once again, a woman is a female pawn for a man’s ambitions. This was the tack taken, most notably, by Ta-Nehisi Coates in The Atlantic Monthly, who argued in late August that McCain was fostering victimization by choosing Palin. Please!

Judith Warner, New York Times (where else?), interpreted for the rest of us a snapshot of Sarah Palin talking with Henry Kissinger. Using her skills at non-verbal communication, Judith claims that the photo reveals a woman who is obviously “out of her league,” who is “scared out of her wits” and “hanging on for dear life.” All those insights — which McCain and others who have had personal contact with the Governor, like the 80 percent of Alaskans who approve of her, never noticed — were evident to Warner in one little photo of Sarah and Henry — amazing, eh?

Rebecca Traister, writing in Salon.com, thinks that Sarah is a “train wreck” that will take us back to the days when “girls couldn’t stand the heat and so were shooed back to the kitchen.” Traister doesn’t feel sorry for Sarah — the woman who got the “chance to be the first woman vice president thanks to all the cracks Hillary put in the ceiling.” She feels sorry for leftist women with their radical agenda “who have to live with what [Sarah Palin] and her running mate have wrought.”

These leftists don’t understand the chord that Sarah Palin has struck with mainstream American women, a great many of whom have endured the kinds of attacks that these women are now leveling at Sarah. Sarah’s convention speech was essentially saying to all those leftists, “How dare you?” She bounced back from the viciousness with steely determination to prove her worth. She absorbed the condescension and responded with both professional demeanor and feminine grace. We could see her jaw squared for the fight and the iron will in her eyes as she smilingly and charmingly showed them what she could do and one-upped them in the process.

Traister and her feminist friends acknowledge being “gobsmacked by the intensity of their feelings about Sarah Palin”; well, so are mainstream American women, who see in Palin their own desire to balance femininity, husband, kids and career in a way that doesn’t shortchange the personal for the professional. (As an aside, I was in Canada last weekend and was pleased to see that conservative Canadians are just as taken with Sarah as their American cousins, some even speaking of her in the same breath as Margaret Thatcher.)

All women who have perfected that balancing act feel satisfaction that “one of our own” would be the first woman to break through to the highest ranks of political leadership in this country — the world’s most powerful democracy. It is so gratifying that it won’t be a radical feminist with her extremist agenda who sacrificed everything else, including her own self-respect, for political power, like the feminists who defended Clinton’s “indiscretions” in the Oval Office. In fact, Sarah likely has pounded the final nail in the coffin of radical feminism. The choice of Sarah means that providing opportunities (not quotas) is the key for women’s empowerment. Her success means that a woman with intelligence and inherent leadership abilities, who is hard working and has a family willing to work together, can reach the highest levels of professional attainment and exude (as well as exert) natural authority with a feminine touch.

I wouldn’t bet against Sarah. I am confident that she will have the last word in Thursday night’s debate. She’s got the stuff it takes, a strong family behind her and millions of mainstream American women (and a lot of Canadian ones) pulling for her every inch of the way!