Obama Has a 'Pony' For You 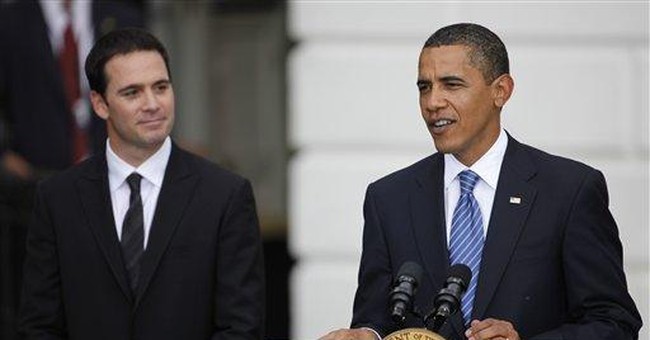 Even little kids know when they’ve been had.

Like the little girl in the bank commercial who gets a tiny plastic pony while the other little girl gets a real pony, and the little boy who gets the cardboard truck, most Americans think President Barack Obama is hiding behind the fine print in his incomprehensible health care plan.

It’s why Obama’s poll numbers are dropping faster than the faces of the kids in the commercials.

Obama’s presidential approval index is now at minus 6; 32 percent strongly approve of him and 38 percent strongly disapprove. Since his inauguration, his job approval rating has sunk from 65 percent to 51 percent. Only 27 percent trust him with the economic crisis, according to Rasmussen daily tracking polls.

Like the guy in the commercials, if you don’t ask, Obama won’t tell. If you sign up for his government-run health care plan because he promises you a pony, I wouldn’t load up on hay.

Recall that Obama assured Americans during the presidential campaign that he wouldn’t “take away folks’ guns.” Despite his record of voting for every gun control bill that was introduced in the Illinois Senate, the majority voted for him.

He said the Second Amendment is a personal constitutional right. At the same time, he said that a District of Columbia law banning private possession of a handgun in the home was “constitutional.” His first Supreme Court appointment, Sonia Sotomayor, ruled against Second Amendment rights every chance she got.

At the “Saddleback Civil Forum on the Presidency” last August, candidate Obama said, “I believe that marriage is the union between a man and a woman. Now, for me as a Christian -- for me -- for me as a Christian, it is also a sacred union. God’s in the mix.” Obama also said he didn’t support a constitutional amendment “with that definition” because marriage has “been a matter of state law. That has been our tradition.”

The media continue to recite Obama’s marriage mantra without question, even though he wants the federal Defense of Marriage Act (DOMA), which defines marriage for purposes of federal law and protects the right of the states to do so, repealed.

He opposed California’s Prop 8, which Californians enacted after homosexuals persuaded four members of the state supreme court to declare its statutory marriage law “unconstitutional.” Speaking on MTV, Obama said “I would vote no on the proposition.”

So much for “our tradition” of defining marriage under “state law.”

Just as he promised the homosexual lobby when he was running for the U.S. Senate, Obama’s Department of Justice is working to repeal DOMA at the same time that its “defending” it. Obama commented on brief: “This brief makes clear, however, that my administration believes that the act is discriminatory and should be repealed by Congress. I have long held that DOMA prevents (lesbian, gay, bisexual and transsexual) couples from being granted equal rights and benefits.”

It’s more Obama overload. Instead of opposing just the benefits section of DOMA, he wants the section defining marriage repealed as well. And that’s from the man who says marriage is a “sacred union” with “God in the mix.”

Unless you’re okay with defending your life and home with a toy gun, and marriage means no more than a plastic ornament atop the cake, trusting Obama with your health care could be fatal.

When Obama says health care—you’re probably thinking life-saving surgery—Obama is thinking pain killers. Think of it as health care based on the Jack Kevorkian model.

Obama said he was for a “single-payer universal health care plan” before he was against it:

Even after the video clip from June 28, 2008, was exposed, Obama denied on Aug. 11, 2009, that he ever said he was “for a single-payer system.” He made a “distinction between a universal plan versus a single-payer plan, because those are two different things.”

He made no distinction. Who are you going to believe, Obama or your lying eyes and  ears?

It’s why Obama can’t sell Americans on his signature issue despite all of his fear-mongering and demonizing of insurance companies. According to Rasmussen daily tracking polls:

Obama says “Over 45 million Americans—including over 8 million children—lack health insurance.” His source, according to footnote five of “Barack Obama And Joe Biden’s Plan To Lower Health Care Costs And Ensure Affordable, Accessible Health Coverage For All,” is an August 2008 report by the Census Bureau. Obama has repeated the bogus figure at least four times.

Obama toys with truth because he’s not used to anybody checking his sources.

Obama counts people as Americans even if they came into the United States over a fence or through a tunnel. Inflating the numbers enhances the empathy-factor and paves the way for Obama to include illegal aliens in government healthcare.

Obama says private insurance companies can compete with a government-run insurance system. To bolster our confidence, he pointed to how well FedEx and UPS compete with the U.S. Postal Service. He said, “It’s the Post Office that’s always having the problems.”

He probably thinks of it as postal workers acting stupidly.

Maybe he’s found the perfect slogan for his government-run health care option: “When you absolutely, positively want to live overnight, trust the ones always having the problems.”

Obama on the Second Amendment, marriage, and health care—it all makes sense if you’re into plastic ponies and cardboard trucks.