When Truth Is Simply Too Controversial

James Gottry
|
Posted: Feb 02, 2020 12:01 AM
Share   Tweet
The opinions expressed by columnists are their own and do not necessarily represent the views of Townhall.com. 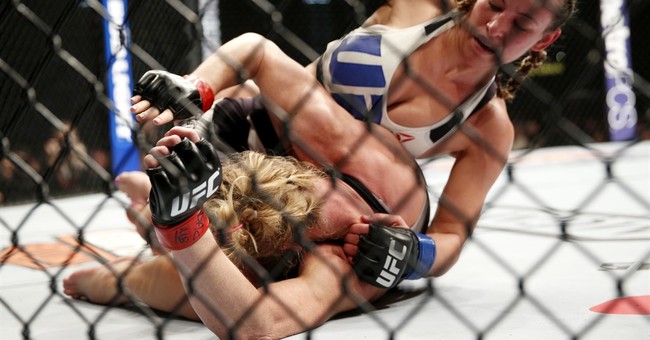 If you peruse social media for three minutes, you can find discussions on virtually every topic imaginable. From pop culture to politics, science to sports, food to fashion, there is no shortage of people willing to express their opinions.

But there are limits.

This week I took a camera crew to a nearby liberal arts college. My goal was simple; I wanted to find out what college students thought about sports. Or, more specifically, I hoped to learn what they thought about transgender women (i.e., biological men) participating in women’s sports.

This was not a theoretical exercise. The debate about men competing in women’s sports is raging and it isn’t going away anytime soon.

On one end of the spectrum, some argue that “there will never be full acceptance as long as sports remain gendered.” They demand full inclusion of transgender athletes based on their self-proclaimed gender identity. Under this view, an MMA fighter such as Fallon Fox can be celebrated as “the bravest athlete in history” for the willingness – as a biological male – to enter the ring and quite literally break the skull of the female competitor he was fighting.

Those who hold the opposing view cite biology as the necessarily determining factor when it comes to participation in men’s or women’s sports. They argue that the inherent physiological differences in men and women (muscle complexion, bone thickness, muscle mass, etc.) give males an “intolerable” advantage over females when it comes to athletic endeavors. Count fighter Tamikka Brents in this camp. Brents was on the receiving end of Fallon Fox’s “bravery,” and received a concussion and 7 broken orbital bones for her trouble. Notably, Brents wasn’t told before the fight that Fox was a biological male. She later said she had “never felt so overpowered ever in my life,” and concluded “when it comes to a combat sport I think [men competing in women’s sports] just isn’t fair.”

At first glance, Americans seem to be evenly split on this issue. According to a Rasmussen Reports poll, 51% of those surveyed opposed admitting athletes into sports based on gender identity, which would suggest 49% favor such a practice. Take a closer look, however, and you’ll see that just 29% favored using “gender identity” as the determining factor; another 20% labeled themselves “undecided.”

Why so many on the fence?

Perhaps they’ve seen what happens when individuals share an insufficiently-woke opinion on issues related to transgenderism. Author J.K. Rowling – of Harry Potter fame – was blasted for her “transphobia” when she came to the defense of a woman who lost her job for stating that people cannot change their biological sex. Tennis great Martina Navratilova – a member of the LGBT community – was also labeled as transphobic after she argued that allowing biological men to compete against women was “insane” and “cheating.”

Suffice it to say, vigorous discourse is not particularly welcomed on this topic. Indeed, transgender cyclist Rachel McKinnon has gone so far as to claim that only a sore losing bigot would object to a biological male participating in female athletics because “real champions want stronger competition.”

My experience at Colorado College this week only served to confirm that sometimes the truth is simply too controversial. As you can see in the video, I asked students a variety of questions about biological men competing in women’s sports. For instance, I inquired as to whether males had any biological advantages in athletics as compared to women. Some acknowledged the scientific reality, but others hemmed and hawed. Others even took a page from the NCAA transgender handbook and questioned whether such a “competitive advantage” existed.

I told students that Karsten Braasch, a male tennis player ranked 203rd on the men’s tour, was able to easily defeat Serena and Venus Williams in back-to-back exhibition matches in 1998, despite a training regimen that one journalist reportedly described as revolving around cigarettes and beer. I asked how this could happen, given the extraordinary talent and skill possessed by the Williams sisters. Some acknowledged the simple fact that men have some biologically-conferred advantages in speed and strength. Others claimed to be unsure of why Braash triumphed.

We talked about Terry Miller and Andraya Yearwood, two high school track and field athletes from Connecticut who, although biologically male, are competing against girls. Though one of these athletes failed to even advance in boys’ indoor track events during the Winter 2018 season, the two now hold 15 women’s state championship titles (which were previously held by 10 different girls). I asked whether this was fair to the girls who were being effectively kicked off the award podium. Some admitted that this was unfair and seemingly in violation of Title IX, but at least one student maintained that Terry and Andraya were girls and denied any negative impact on women’s athletics.

As a society, have we come to a place where truth cannot be tolerated in the face of the prevailing orthodoxy of “tolerance”? Must the most basic biological differences between men and women be denied or whispered in secret? When the camera was turned off, one student told me that he believed biological men should not be competing in women’s sports. He also told me that he wasn’t comfortable making that statement on camera.

Men and women are different. Allowing men to compete in women’s sports hurts women. Stating these facts may be politically taboo, but that doesn’t mean they aren’t true.