Jacob Sullum
|
Posted: Jun 28, 2017 12:01 AM
Share   Tweet
The opinions expressed by columnists are their own and do not necessarily represent the views of Townhall.com. 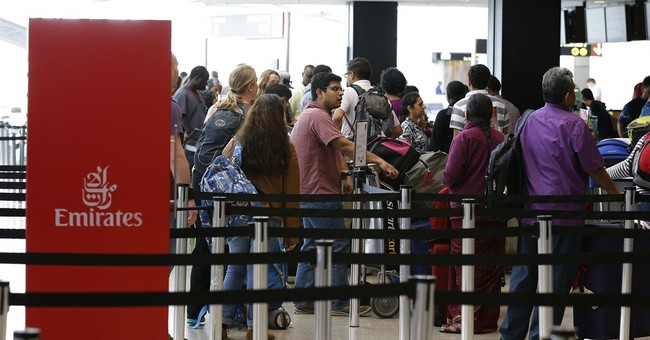 This week the Supreme Court unblocked most aspects of President Trump's executive order limiting entry into the United States, signaling that the restrictions are likely to be upheld. That makes sense because the reasons that two federal appeals courts offered for upholding injunctions against Trump's order are unpersuasive. But the fact that Trump's policy is legal does not make it smart.

The original version of Trump's order was issued in great haste a week after he took office, and it showed. The 90-day ban on entry by citizens of seven Muslim-majority countries applied to current visa holders, including people working and studying in the United States, and legal permanent residents, who were barred from returning home after traveling abroad.

Adding to the confusion, the travel ban took effect immediately, stranding residents and visitors in mid-trip without notice. The result was dismay and disorder at airports around the world as officials, travelers and lawyers grappled with the new policy.

After the order was blocked by the courts, Trump issued a revised version on March 6, clarifying that the travel ban did not apply to legal permanent residents, who have a right to due process when the government tries to prevent their re-entry, or to current visa holders, whose hosts may have standing to sue. Notably, the order issued by the Supreme Court on Monday says that while the case is pending, the travel ban should not be enforced against visa applicants or would-be refugees with a "bona fide relationship" to Americans, such as relatives, students accepted by U.S. universities, employees hired by U.S. companies or lecturers booked to speak here.

The revised order also eliminated Iraq from the list of targeted countries and excised language favoring religious minorities from the section imposing a 120-day moratorium on admission of refugees. Critics cited that preference as evidence that the order was motivated by anti-Muslim bias.

The U.S. Court of Appeals for the 4th Circuit nevertheless concluded that the March 6 order "in context drips with religious intolerance, animus, and discrimination." The context that the court deemed relevant consisted mostly of statements made by Trump or his surrogates before and after the election, including his support for "a total and complete shutdown of Muslims entering the United States."

But that is not the policy Trump actually tried to implement, and relying on his campaign comments to conclude that his executive order is a "Muslim ban" in disguise leads to strange results. The plaintiffs conceded, for example, that if Hillary Clinton had been elected president and issued exactly the same executive order, it "could be constitutional."

The U.S. Court of Appeals for the 9th Circuit relied on a different rationale when it upheld an injunction against Trump's order, saying he exceeded his statutory authority because he did not make an evidence-based determination that admitting the people he wants to exclude would be "detrimental to the interests of the United States." But that was really just another way of saying that Trump's policy, which is supposedly aimed at protecting Americans from terrorists, is half-baked and empirically unsound.

That much is true. Since 1975, no terrorist from any of the countries covered by the travel ban has killed anyone in the United States, and the odds of being killed by a refugee are infinitesimal.

In any case, it has never been clear why a travel ban was necessary for Trump to deliver the "extreme vetting" he promised. Even the "total and complete" Muslim ban he originally proposed was supposed to last only as long as it took to "figure out what is going on," which according to his executive orders means three months.

Trump has been president for more than five months. By his own account, he could have made any necessary improvements in traveler screening by now. His failure to do so provides further evidence that his policy is just for show.