The Cannabis Exception to the Second Amendment

Jacob Sullum
|
Posted: Nov 30, 2016 12:01 AM
Share   Tweet
The opinions expressed by columnists are their own and do not necessarily represent the views of Townhall.com. 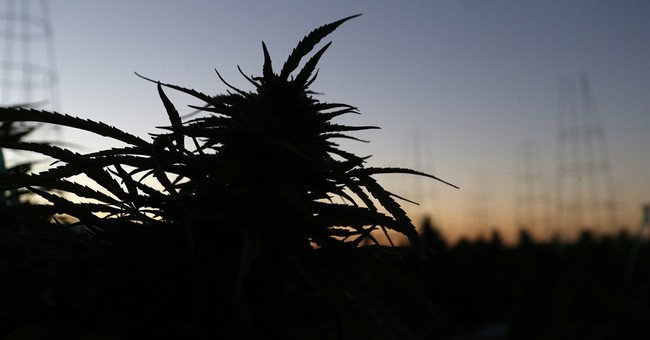 Trending
If you want to buy a gun from a federally licensed dealer, you have to fill out Form 4473, which is aimed at determining whether you are legally allowed to own a firearm. A recent revision to the form by the Bureau of Alcohol, Tobacco, Firearms and Explosives (ATF) underlines how blithely the federal government strips Americans of their Second Amendment rights.

"Are you an unlawful user of, or addicted to, marijuana or any depressant, stimulant, narcotic drug, or any other controlled substance?" asks Question 11(e). In the latest version of Form 4473, which dealers are required to start using on January 16, that question is followed by a warning in bold type: "The use or possession of marijuana remains unlawful under Federal law regardless of whether it has been legalized or decriminalized for medicinal or recreational purposes in the state where you reside."

"We were concerned that some buyers who use marijuana may read the 2012 language asking if they were an 'unlawful user of, or addicted to, marijuana' and erroneously say no because in that particular state, marijuana has been legalized," an ATF spokeswoman told The Denver Post last week. "Most dealers recognize that marijuana use prohibits people from purchasing firearms under federal law, but many members of the general public may not be as familiar with the Gun Control Act."

Under that law, a cannabis consumer who possesses a gun (no matter where he got it) is guilty of a felony punishable by up to 10 years in prison; Likewise, anyone who sells him a gun if has reason to know the buyer is a cannabis consumer. Falsely denying marijuana use on Form 4473 can get you up to five years.

The rationale for this rule is risible. Last August, the U.S. Court of Appeals for the 9th Circuit ruled that banning gun sales to people who have medical marijuana cards is consistent with the Second Amendment because "empirical data and legislative determinations support a strong link between drug use and violence."

The court did not actually cite any such evidence, but it did observe that "illegal drug users, including marijuana users, are likely as a consequence of that use to experience altered or impaired mental states that affect their judgment and that can lead to irrational or unpredictable behavior." The same could be said of drinkers, but it seems unlikely that the 9th Circuit would uphold a law that restricted the Second Amendment to teetotalers.

The appeals court also argued that cannabis consumers are "more likely to have negative interactions with law enforcement officers because they engage in criminal activity." It added that "they frequently make their purchases through black market sources who themselves frequently resort to violence."

Both of those risks are byproducts of prohibition, and they do not apply to people who grow, buy, or consume marijuana in accordance with state law. The fact that those activities are still prohibited by the federal government does not mean the average cannabis consumer is apt to get into a shootout with DEA agents, let alone with the state-licensed retailer who sells him marijuana.

The idea that marijuana makes people violent is a relic of the 1930s that has no relevance in determining who deserves to exercise the fundamental right of armed self-defense -- a point the president-elect should recognize. Donald Trump's choice for attorney general may believe that "good people don't smoke marijuana," but Trump himself has repeatedly expressed a devotion to the Second Amendment that is inconsistent with disarming Americans based on such frivolous falsehoods.