Jacob Sullum
|
Posted: Nov 23, 2016 12:01 AM
Share   Tweet
The opinions expressed by columnists are their own and do not necessarily represent the views of Townhall.com. 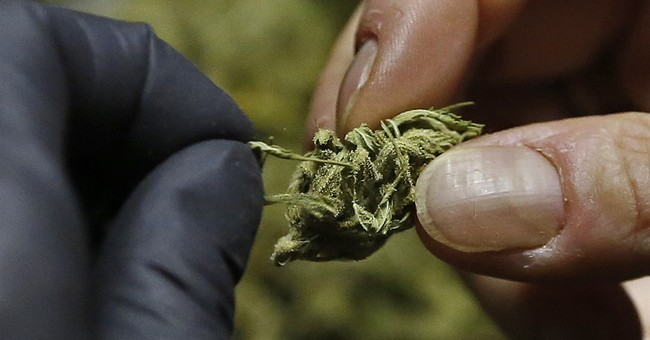 Trending
On the same day Donald Trump was elected president, four states legalized marijuana for recreational use, while four others legalized or expanded access to medical marijuana. As a result of those ballot initiatives, most states now recognize marijuana as a medicine, and one in five Americans lives in a state that has decided to tolerate cannabis consumption without a doctor's note.

During his campaign, Trump said he supports medical marijuana but has concerns about broader legalization, a policy he nevertheless said states should be free to adopt. Trump's recently announced choice for attorney general, Sen. Jeff Sessions, casts doubt on those commitments.

The Alabama Republican, a former U.S. attorney and state attorney general, is an old-fashioned drug warrior who pines for the days when Nancy Reagan's Just Say No campaign helped "create a hostility to drug use." He was outraged when President Obama conceded that marijuana is less dangerous than alcohol, and he recently claimed that "good people don't smoke marijuana."

Sessions has repeatedly criticized the Obama administration's policy of tolerating state-authorized marijuana suppliers. During a 2009 Senate hearing, he complained that "Attorney General Holder has said federal authorities will no longer raid medical marijuana facilities in California, which is against U.S. law" and "contrary to the position taken by the Drug Enforcement Administration."

At a hearing last April, Sessions bemoaned the message sent by marijuana legalization, which he said implies that "marijuana is not dangerous" and encourages teenagers to use it. "We need grownups in charge in Washington to say marijuana is not the kind of thing to be legalized," he said. "The Department of Justice needs to be clear, and the president needs to assert some leadership."

Now that Trump has picked Sessions to head the Justice Department, we may get a clearer idea of how far Sessions wants to go in pressing the point that "marijuana is not the kind of thing to be legalized." While medical marijuana suppliers are protected from the feds by a spending rider that is likely to be renewed, if given free reign, Sessions could easily wreak havoc in the recreational industry.

Every state-licensed marijuana business remains a criminal enterprise under federal law, subjecting its owners to the risk of prosecution and forfeiture. An anti-pot crusader at the helm of the Justice Department could make that risk salient again by raiding growers, manufacturers, and retailers, or just by threatening to do so.

Sessions also could challenge state legalization in federal court, although he might not like the results even if he wins. While the DOJ might prevail in arguing that state licensing and regulation of cannabusinesses conflicts with federal law, it cannot force states to recriminalize what those businesses do, so the upshot of a successful lawsuit could be less government oversight of the industry.

Any such interference by the DOJ would contradict Trump's commitment to marijuana federalism. "I really believe you should leave it up to the states," he said at a rally in Reno last year. "It should be a state situation...In terms of marijuana and legalization, I think that should be a state issue, state by state."

Most Americans agree with that approach. Recent national polls indicate that most Americans (60 percent, according to Gallup) think marijuana should be legal, while most Republicans continue to oppose legalization. But even among Republicans, most -- 70 percent, according to a CBS News poll conducted last April -- think the feds should not try to override state decisions in this area.

In other words, marijuana legalization is considerably more popular than Trump, who received less than 47 percent of the vote. Marijuana federalism is more popular still, and it is firmly rooted in conservative constitutional principles.

Many conservatives are skeptical of Trump, who until his recent political makeover was known as a liberal New Yorker. Keeping his promise to respect state marijuana policies could help reassure them while also pleasing left-leaning voters. All Trump needs to do is nothing.