Jack Kerwick
|
Posted: Jan 05, 2018 11:00 AM
Share   Tweet
The opinions expressed by columnists are their own and do not necessarily represent the views of Townhall.com. 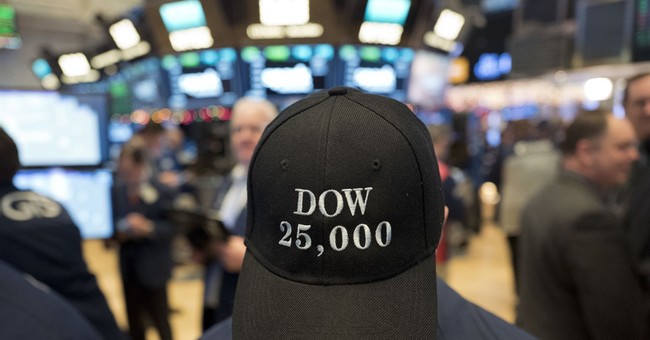 It is over a year now since Donald Trump was elected to the Presidency of the United States. Anyone who still doubts that our 45th president is anything less than a world-historic figure, a truly unique individual, and a president unprecedented for his effectiveness is not to be taken seriously.

Trump’s chronic critics, the anti-Trumpers and NeverTrumpers, are delusional, dishonest, and, importantly, arrogant, for the New York billionaire who never held a political office has repeatedly proven them epically wrote, a painful fact with which they are unwilling to reckon.

Trump was one of 17 GOP presidential candidates in what amounted to among the most crowded and competitive of presidential fields to date.  Practically overnight, the man who “conservative” and “liberal” commentators alike dismissed as a clown rose like a phoenix to clear the field, clobbering the Republican Party and the conservative movement’s brightest stars.

With nothing but his army of Deplorables behind him, the man who up until the night of the Election all of the smart and respectable folks assured the country had virtually no chance of winning, smashed into the ranks of the has-beens of America’s political dynasties and some of the most influential movers and shakers in the world.

It isn’t just the Clintons, Bushes, and Obamas over whom Trump prevailed; he defeated as well the Democratic and Republican Party Establishment(s); the Deep State; a hostile, dishonest media; the entertainment industry; academia; George Soros and his street-vermin thugs; and even Pope Francis, who attempted to alter the outcome of an American election by suggesting that Trump was not a Christian for wanting to construct a border wall.

Trump, the David to his enemies’ Goliath, beat them all.

One year later, in the face of a relentless onslaught of overwhelmingly negative, outrageously dishonest criticism by most of the media, the President continues to double down, pursuing with tunnel vision his agenda to Make America Great Again.

Whether one likes or dislikes Trump, only the willfully blind or the apathetic will refuse to admit that the man is cut from exceptionally rare cloth.  Few people in human history possess Trump’s fortitude, his guts, and his raw determination.  No public figure today could weather the constant attacks to which both Trump and his family are routinely subjected.

Even former President Jimmy Carter conceded that Trump’s nemeses in the media have besieged him in ways unfamiliar to all of Trump’s predecessors.  He told Maureen Dowd of The New York Times: “I think the media have been harder on Trump than any other president certainly that I’ve known about.” Carter even implicitly acknowledges that at least some of this is Fake News.  “I think they feel free to claim that Trump is mentally deranged and everything else without hesitation.”

Indeed, the Media Research Center has found that in the months of September and October of 2017, the coverage of the President supplied by ABC, NBC, and CBS was 90% negative.

Much less are there any public figures that would be able to weather these attacks while barreling full steam ahead in fulfilling his promises.

And this brings us to the next point:

One needn’t be a die-hard Trump fan to admit that the President has indeed had a remarkable first year.  Due to space constraints, here we will focus only on Trump’s effectiveness as it pertains to the economy.

Although such smart people like Paul Krugman assured us that Trump’s presidency would break the economy, just the opposite, in fact, has occurred.

The stock market reached record highs 70 times and, for the first time ever, rose 5,000 points. As I write this, the Dow Jones reached 25,000 points—a historical first.

An estimated 42,000 new jobs promise to be created thanks to the President’s efforts to create energy-independence via the construction of the Keystone XL and Dakota Access pipelines.

Shortly before leaving office, former President Barack Obama, under whose watch 16,000 Americans lost their manufacturing jobs in 2016 alone, mocked then-candidate Trump’s pledge to return these jobs (and more) to the United States. “Well how exactly are you going to do that? What are you going to do?” Obama asked Trump: “What magic wand do you have?”

Well, one year later, 171,000 manufacturing jobs have been created and manufacturing unemployment, standing at 2.6%, is the lowest that it has ever been.

Consumer confidence reached its highest level since 2000, and housing sales are higher than they have been in well over a decade.

Obama was POTUS for eight years.  He enjoys the dubious distinction of being the only President in American history whose economy never saw a full year of 3% GDP growth. The average annual growth rate of the GDP during his tenure never exceeded 1.48%, making his economic recovery the weakest period of expansion since the 1940s.

In glaring contrast, despite a couple of natural disasters, one right after the other a few months back, GDP growth under Trump has managed to exceed 3% in the last two quarters of 2017.

And, of course, we can’t forget the huge tax plan package—the Tax Cuts and Jobs Act—that the Republicans (only) passed in December.  As even the Trump-haters in the media had to finally concede, middle and working-class households will be keeping thousands more of their dollars next year as the standard deductions for individuals and married couples have now doubled.

Because the corporate tax rate has been reduced from 35% to 21%, immediately upon its passage several corporations gave larger bonuses to and raised wages for their employees.

The tax plan makes it possible to drill for oil in the Arctic, thereby moving us but another step closer to energy-independence and, importantly, it extinguishes the cornerstone of Obamacare, the so-called “individual mandate.”  The Republicans failed to formally appeal Obamacare last year.  Yet through this law, it has, in effect, been defanged. It hangs in the air, its foundation obliterated.

Culturally and in terms of national security, there is much more that the President has accomplished within his first twelve months in office. To these achievements we’ll turn in future articles.