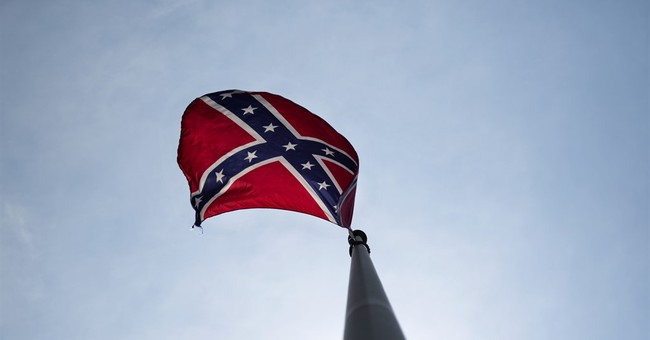 First, the logic of those who demand that the Confederate flag be erased from public life inexorably leads them to demand the same of the American flag (as well as, for that matter, all traditional American symbols).

The Stars and Stripes flew over the institution of slavery for 88 years—84 years longer than did the Confederate flag. It was under the banner of the American flag that American Indian tribes were decimated and their lands confiscated; Japanese-Americans were interned; and Africans were transported across the Atlantic. It is the American flag that symbolizes for many in America and around the world oppression of all sorts—centuries of slavery, “racism,” genocide, and unrelenting imperialism.

It is only the political vulnerability of the Confederate flag that explains why it is in the crosshairs while the American flag remains safe—for now.

Second, in demonizing the flag, the haters demonize a whole section of the country, a section—the Southeast—that is as American, as the saying goes, as Apple pie, millions of Americans from across the generations whose contributions to the formation of the country are second to none.

For Southerners, the war was as much of a “civil war” as was the war between the American colonies and the Mother country. There was a second American War of Independence.

In treating the Confederate flag like a Swastika, in reducing it to a one-dimensional symbol of “hate,” the flag’s enemies—both Democrats and Republicans—are guilty of nothing less than the dehumanization of generations—of millions—of patriotic, God-fearing, salt-of-the-Earth Southern Americans.

This is ominous because, as noted, the South is integral to American history. In dehumanizing Southerners, in rewriting their history, we dehumanize the best of ourselves and rewrite our history.

For example, Robert E. Lee, a man who has become almost as much of a symbol of the Confederacy as the Confederate flag itself and, by all accounts, among the greatest of human beings, to say nothing of Americans, that ever lived, freed his slaves well before war erupted. In a letter to none other than Lord Acton, Lee states that “the continuance of a free government” depended upon the preservation of what is known as “states’ rights.” It is for the sake of the latter that he fought, for once states’ sovereignty went by the wayside, the central government would become “aggressive abroad and despotic at home.”

Moreover, of the more than five million whites who lived in the South at the outset of the war, a mere 6 percent owned slaves. And half of these owned no more than five slaves.

Finally, another little inconvenient fact that puts the lie to the idea that the war was all about slavery is that there were black Confederates.

Syndicated columnist and economist Walter E. Williams is a black Northerner who holds that there is indeed a right to secession. He also believes that the Southern states, like all states, had a Constitutional right to secede. Williams at one point had the Confederate flag hanging in his office at George Mason University.

Williams refers to a Virginia newspaper article from 1861 that lauds 70 blacks who volunteered “‘to act in any capacity that may be assigned to them’” in order to defend the homeland of Virginia. Frederick Douglas as well commented on this phenomenon. “‘There are at the present moment,” Douglas remarked, “‘many colored men in the Confederate Army…ready to…destroy the Federal government.’”

Williams as well cites Charles H. Wesley, a “distinguished black historian,” who wrote of the “sixteen companies (1,600) of free men of color” that “marched through Augusta, Georgia on their way to fight in Virginia.” Wesley remarked that black and white Confederates were marching together long before integration of this sort would be tolerated in the North.

To this day, there remain black “confederates.” Bob Harrison is one example. Harrison is “a first sergeant of Company B, Thirty-Seventh Texas Cavalry, C.S.A (a historical reenactment unit), a Southern Party staff writer, a descendant of two Virginia slave families, a history scholar, and a modern black Confederate,” as he describes himself in his foreword to Walter Kennedy’s, Myths of American Slavery. Harrison refers to “the Civil War” as the “War of Northern Aggression.”

Much more can be said on this topic. But that’s the problem: The flag haters, on their quest to fundamentally transform the country, insist on purging those voices that imperil their plans.