The Racism Industrial Complex and Ferguson 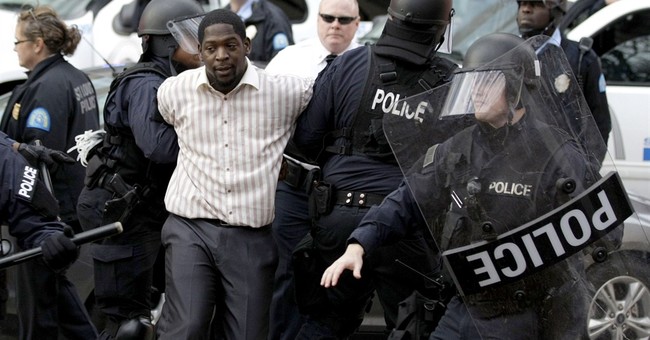 Justice was served in Ferguson, Missouri.

First, the usual suspects in the leftist media and their heroes in the White House and in the Department of Justice were once again as wrong as can be. This is wholly unsurprising given their investment in “the Myth of the Hobbled Black,” as one black commentator described it. This fiction is the thread that binds Big Government, Big Academia, Big Business, and Big Media into one colossal industry, what we can call the Racism-Industrial-Complex (RIC).

In all sorts of ways--emotionally, psychologically, monetarily, and politically—RIC agents profit immeasurably from promoting the line of endemic white “racism” and black suffering. Thus, they scarcely if ever address the astronomical rate and ghastly nature of black-on-white crime while sparing no opportunity to invent white villains—even when they have to transform a Hispanic (George Zimmerman) into one.

And this brings us to our next point:

Aliens from another galaxy who have just landed on planet Earth could be forgiven for thinking that perhaps Michael Brown really was gunned down in cold blood by a foaming-at-the-mouth “racist” cop who had been on the hunt for any innocent black person that he could find. Americans, at least those of us who have been alive for more than a few years and who don’t have an ideological axe to grind, have no such excuse for entertaining any such suspicions. There are some very simple reasons for this.

For starters, we have seen this story before. Back in August, when the rest of the world became aware of Ferguson, I reminded readers of this column that Michael Brown and Darren Wilson are characters with whom Americans have long been familiar. Whenever a black person gets the short end of the stick in a confrontation with white people, RIC agents in the media and elsewhere immediately impose upon events the impress of their template of choice: the Myth of White Oppression and Black Victimization.

Yet, virtually to an incident, they wind up with egg on their faces as facts surface and reality sends their fantasies soaring to the ground.

This is why some of us knew that Michael Brown was Tawana Brawley, the Duke Lacrosse Fake Rape victim, the Central Park Five, and Trayvon Martin by another name.

And it’s why everyone with a modicum of experience with American race relations and a semblance of reason should’ve known the same.

Secondly, just moments before he was killed, Michael Brown was captured on video engaging in a strong-arm robbery of a business owner half his size. Darren Wilson, in sharp contrast, was a decorated police officer. That the former was the bad guy and the latter the good guy should have been a no-brainer to anyone who values decency.

Thirdly, if white police officers (or any other whites) are really that determined to slaughter innocent blacks, then why wouldn’t they just set up shop outside of black churches throughout America and pickoff churchgoers? After all, isn’t the image of a burning black church (along with that of the noose) just the image of white racial hatred that the media has busily promoted? Furthermore, if white cops (and other whites) hate blacks indiscriminately, then why would they insist upon risking their lives on the most dangerous streets in America where they would be forced to deal mostly with young men who are armed? Why not lay in wait of blacks of every demographic group in an environment—like the grounds of a church—that is safe?

White police officers have their run-ins with just those blacks—young and male—responsible for the overwhelming majority of crime within black communities. This same demographic is responsible for a disproportionately large share of crime throughout the nation.

Finally, the truth is that white police officers obviously do not have it in for blacks. In fact, even when it comes to black low life thugs of the type that have descended upon Ferguson, the last thing white police officers want are fatal confrontations, for everyone knows that evidence, law, and common sense be damned, the shooting death of even the most repulsive of black criminals via a white cop is likely to erupt into Ferguson-style riots.

One last thought: Ironically, it is the reaction to the grand jury’s brave decision to not indict Officer Wilson that vindicates him and every other police officer in Ferguson—and in the many, many Fergusons throughout America. The godless actions of the evil doers in Ferguson that Americans have had the great misfortune of viewing from the comfort of their living rooms reveal the war-like conditions in which police officers must labor in inner cities across the land.