In China, Freedom of Speech Is No Slam-Dunk

Jackie Gingrich Cushman
|
Posted: Oct 10, 2019 12:01 AM
Share   Tweet
The opinions expressed by columnists are their own and do not necessarily represent the views of Townhall.com. 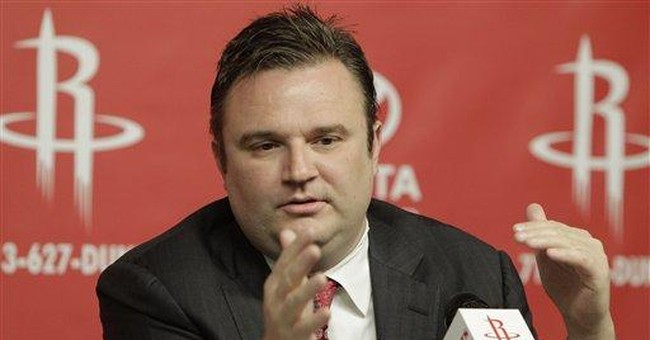 The current social media dust-up between the National Basketball Association and China reflects the stark differences between the ways the United States and China understand freedom -- freedom of speech, in particular.

As I wrote last month, "Hong Kong was returned to China (in 1997) with an agreement that the two would be one country but have different systems of government. The agreement included a separate legal and judicial system for Hong Kong, as well as the rights to free speech and free assembly ... The protests started after Carrie Lam, Hong Kong's chief executive, proposed a bill that would allow the transfer of criminal suspects to mainland China."

The bill was halted, but the protesters now have additional demands, "including no longer describing the protests as riots, allowing universal suffrage for the Legislative Council and its CEO and providing amnesty for those protesters who have been arrested."

The original agreement has Hong Kong returning to China in full in 2047. These protests have been described in mainland China as riots and separatist movements. In our country, they are seen as protests for freedom.

Last Friday, Houston Rockets General Manager Daryl Morey tweeted a picture from the protests in Hong Kong that included the words, "Fight for Freedom. Stand with Hong Kong." The tweet was soon taken down.

"I did not intend my tweet to cause any offense to Rockets fans and friends of mine in China," he wrote. "I was merely voicing one thought, based on one interpretation, of one complicated event. I have had a lot of opportunity since that tweet to hear and consider other perspectives."

This led to a backlash in the United States, where Sen. Ted Cruz, R-Texas, and Beto O'Rourke, a candidate for the Democratic presidential nomination, agreed that this response to China's unhappiness over the original tweet was tantamount to assisting Chinese censorship. This is probably one of the few things these two agree on.

Joe Tsai, the Taiwanese-Canadian billionaire businessman who co-founded Alibaba Group and owns the Brooklyn Nets, posted his take on his Facebook page on Sunday. As background, Tsai was born in Taiwan in 1964 after his parents fled Communist China. Alibaba is a multinational company founded in China.

"Supporting a separatist movement in a Chinese territory is one of those third-rail issues, not only for the Chinese government, but also for all citizens in China," wrote Tsai, referring to Hong Kong. "The one thing that is terribly misunderstood, and often ignored, by the western press and those critical of China is that 1.4 billion Chinese citizens stand united when it comes to the territorial integrity of China and the country's sovereignty over her homeland. This issue is non-negotiable."

Keep in mind that the Chinese government controls the media in China and therefore controls what information is seen and read by its citizens. Tsai's statement that all Chinese agree on a single stance is indicative of the country's attempt to suppress thought by suppressing free speech.

NBA Commissioner Adam Silver stood up for freedom of speech on Tuesday. "It is inevitable that people around the world -- including from America and China -- will have different viewpoints over different issues," he said. "However, the NBA will not put itself in a position of regulating what players, employees and team owners say or will not say on these issues. We simply could not operate that way."

While the issue of China's "sovereignty over her homeland" may be nonnegotiable for Tsai, it's also not up for discussion with China's state-run broadcasting network, China Central Television, which canceled its plans to air the NBA games. "We believe that any comment that challenges China's sovereignty does not belong in the scope of free expression," CCTV said in a statement.

Their stance can be summarized this way: If you control language, then you can control thought.

This is antithetical to our belief in free speech and freedom of expression, especially in the arena of politics. However, we, too, have had those who have wanted to censor what is said in our country because it might hurt someone's feelings or trigger uncomfortable discussions.

As Margaret Thatcher so rightly proclaimed, "first you win the argument, then you win the vote." This can happen only in a country with freedom of speech.

Keep this in mind as you watch how the world responds. Freedom of thought can happen only with freedom of speech; squashing speech is simply an attempt to control thought, and one can only control thought by controlling people.