Jackie Gingrich Cushman
|
Posted: Mar 02, 2017 12:01 AM
Share   Tweet
The opinions expressed by columnists are their own and do not necessarily represent the views of Townhall.com. 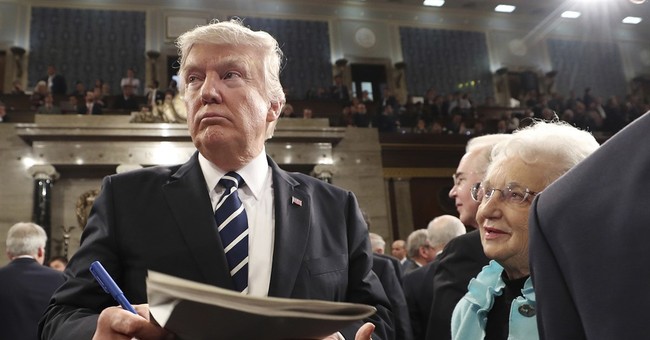 Slightly more than a month into his presidency, Donald Trump reflected on his performance so far -- both in terms of what's been done and how it's been communicated -- during a Tuesday interview with "Fox and Friends." Trump, known for being frank with others about their performance, was equally frank about himself and his administration.

For a man who has vast experience with the news media, his grade reflects an expected extremely high level of performance. Trump appears to understand that he must communicate differently as president than he did as candidate.

That evening, Trump delivered the best speech that I have heard him deliver. He was calm, deliberate and respectful. He was purposeful and presidential.

He opened by reaching out to all Americans and pulling us together.

"Tonight, as we mark the conclusion of our celebration of Black History Month, we are reminded of our nation's path toward civil rights and the work that still remains. Recent threats targeting Jewish Community Centers ... remind us that, while we may be a Nation divided on policies, we are a country that stands united in condemning hate and evil in all its forms," he said.

Throughout the speech, Trump laid out his goals for his administration: tax reform, fair trade, immigration reform, increased military spending, infrastructure, repealing and replacing Obamacare, school choice and foreign policy. To anyone who might contend that he did not include much about policy: read the transcript.

Trump said that he will work with both parties in Congress to make progress. "If we are guided by the well-being of American citizens, then I believe Republicans and Democrats can work together to achieve an outcome that has eluded our country for decades," he said.

On Wednesday morning, I got up and read the transcript, and the written words struck me as even better than the words that I had heard the night before. He not only recognized special guests, but connected them with policies and programs. He framed the speech around "what will America look like as we reach our 250th year? What kind of country will we leave for our children?" By doing so, Trump allowed us to look forward to what we might be while also asking ourselves what we want to leave behind; he was aspirational and inspirational.

Trump's conclusion pushed us to aim high in setting our goals, to think about what might be, to lean into the future and to work together.

"The time for small thinking is over. The time for trivial fights is behind us. We just need the courage to share the dreams that fill our hearts. The bravery to express the hopes that stir our souls. And the confidence to turn those hopes and dreams to action. From now on, America will be empowered by our aspirations, not burdened by our fears -- inspired by the future, not bound by the failures of the past -- and guided by our vision, not blinded by our doubts."

In closing, Trump chose to frame the issues in a different way than his predecessor had done. Rather than looking to government to solve their problems, he challenged his listeners to believe in themselves and in each other.

"And I am asking everyone watching tonight to seize this moment and -- Believe in yourselves. Believe in your future. And believe, once more, in America."