Jackie Gingrich Cushman
|
Posted: Jan 12, 2017 12:01 AM
Share   Tweet
The opinions expressed by columnists are their own and do not necessarily represent the views of Townhall.com. 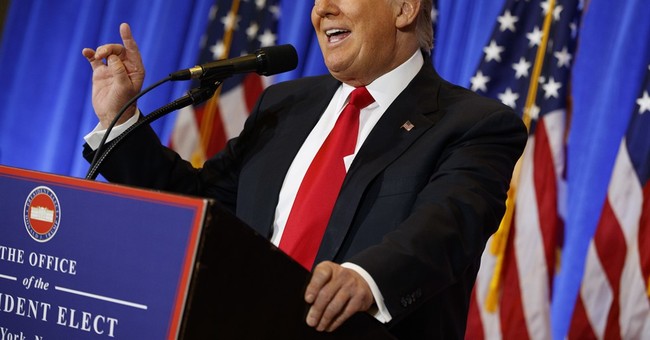 Words have power; they create images and possibilities, and provide a window into the future of what could be. The best leaders use positive words to communicate a potential future. They inspire action, progress and positive results. For words to matter, they must be upheld by a solid foundation. They cannot be all fluff and flutter.

President Ronald Reagan communicated clearly when he spoke in 1987 in Berlin at the Brandenburg Gate. "General Secretary Gorbachev, if you seek peace, if you seek prosperity for the Soviet Union and Eastern Europe," Reagan challenged, "Mr. Gorbachev, open this gate! Mr. Gorbachev, tear down this wall!"

This same speech noted that there was "one great and inescapable conclusion: Freedom leads to prosperity. Freedom replaces the ancient hatreds. ... Freedom is the victor."

Slightly more than two years later, the wall was torn down. Words had made the unthinkable seem possible; words had fostered ideas, led to action and helped lead to events that caused the wall to tumble down.

Reagan's challenge to tear down the wall was built on his foundational belief that freedom and liberty lead to prosperity. Government could not produce the output of freedom, only people could.

Words without a solid foundation underlying them are simply a facade.

Leading up to the 2008 election, then-Senator Barack Obama used the tagline "Hope and Change." The campaign's promise of a better future led many Americans to vote for him without understanding how the slogan would lead to action and what the outcome might be.

Eight years later, federal government debt has increased from $10.6 trillion at the time of his inauguration to $20 trillion today. The economy has recovered... but very slowly, and many Americans feel left behind.

The election of businessman Donald Trump as president, and the defeat of Hillary Clinton, who represented to many the third term of Obama and entrenched politicians, is Obama's legacy.

In President Obama's farewell address in Chicago, in front of a crowd of thousands, he closed by once again pointing to the future in an effort to rally his troops. "Yes, we can. Yes, we did. Yes, we can." Once again, reaching forward while ignoring the past.

While Trump may not be as eloquent as Reagan was, he too will focus on the outcome -- real results. As a real estate developer, Trump is used to the process being hard, being messy, involving setbacks and conflict with various stakeholders. He is also used to focusing on the end result and succeeding over time.

Obama is an ideologue, focused on words, ideas, and thoughts... regardless of whether that makes sense in the real world. Trump, as my father Newt Gingrich says, is the person who can "kick-over the table" and "drain the swamp" in Washington. -- a combination of Andrew Jackson, Theodore Roosevelt and PT Barnum.

As Trump transitions from president elect to president, he can build on the solid foundation he created during his campaign, one that he focused on during his victory speech. "As I've said from the beginning," Trump said on the morning of November 9.  "Ours was not a campaign, but rather an incredible and great movement made up of millions of hard-working men and women who love their country and want a better, brighter future for themselves and for their families. It's a movement comprised of Americans from all races, religions, backgrounds and beliefs who want and expect our government to serve the people, and serve the people it will."

From there, he moved on to what is to come. "Working together, we will begin the urgent task of rebuilding our nation and renewing the American dream," he said. "I've spent my entire life and business looking at the untapped potential in projects and in people all over the world. That is now what I want to do for our country. Tremendous potential. I've gotten to know our country so well -- tremendous potential. It's going to be a beautiful thing. Every single American will have the opportunity to realize his or her fullest potential. The forgotten men and women of our country will be forgotten no longer."

"And I can only say that while the campaign is over, our work on this movement is now really just beginning," such true and revealing words.

Rather than claiming a mandate, Trump claims to move forward with work.

The tens of thousands of people who showed up at Trump rallies during his campaign were drawn not only by his personality, but also by his message -- one based on a solid foundation. This year it will be fascinating to watch as that message transforms into real results.