Come On, Joe, Make Everyone Happy 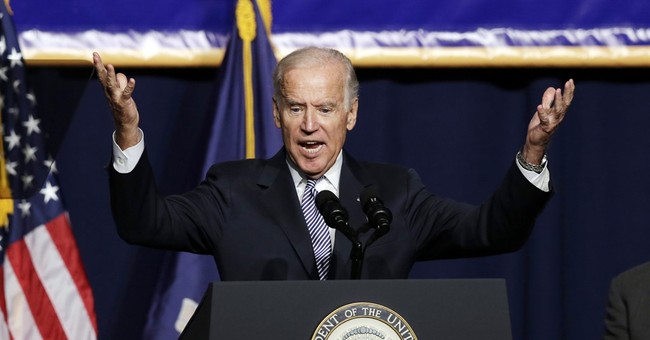 Trending
While millions of people are expected to watch the second Republican debate this week on CNN, the first Democratic debate will not be held until next month on Oct. 13. With only two top-tier candidates on the Democratic side, Hillary Clinton and Bernie Sanders, the potential entrance of Vice President Joe Biden is on everyone's mind -- on both sides of the aisle.

Clinton, the heir apparent, has fallen steadily in national polls since spring, when she topped out at 67 percent. Her national polling average, according to the Real Clear Politics website, is currently 45 percent, versus 23 percent for Sanders. Even though undeclared, Biden is pulling in 19 percent. In the first two primary states, Clinton is tied with Sanders in Iowa, and she is behind Sanders by more than 10 percent in New Hampshire. The implausibility of Sanders' socialist platform drawing national support and the view held by many voters that Clinton is unlikable, untrustworthy and potentially unelectable leave an opening for Biden.

It's not too late. Every state has its own deadline and filing requirements for candidates to appear on the primary ballot. The first state deadline is Alabama's, on Nov. 6. While Biden's signature is required to file, there is no legal reason, according to Larry Sabato, director of the University of Virginia Center for Politics, that he cannot sign while still undeclared. The paperwork for Virginia, which requires thousands of signatures, could be completed by a third party on Biden's behalf by the Dec. 10 deadline.

Early this month, Biden spoke at the Ahavath Achim Synagogue in Atlanta. At the event, when asked by his close friend and host Stuart Eizenstat if he would be running for president, Biden responded, "If I can reach that conclusion that we can do it in a fashion that would still make it viable, I would not hesitate to do it." The same night, Biden reflected on what could be his last barrier to cross before running.

"The question is, 'Can I do it?'" Biden mused. "Can my family undertake what is an arduous commitment that we'd be proud to undertake under ordinary circumstances? But the honest-to-God answer is, I just don't know."

Biden's answer provides a window into why he is so loved: His honesty and authenticity.

New CBS "Late Show" host Stephen Colbert encapsulated why people love Biden when he welcomed the vice president last week to his show. "I'll tell you why I think that is," said Colbert. "When we see you, we think that we are actually seeing the real Joe Biden ... we see the real you."

An appreciation for authenticity is what is drawing Republicans to support Donald Trump. Just imagine if Biden -- a likable, sympathetic, Democratic candidate who is both authentic and, as Colbert noted, a "man of deep faith" -- were to run. The race would change in an instant.

Biden is not only authentic, but also empathetic, a quality that is rarely displayed by other politicians, but one that Biden wears well. When speaking of the recent death of his son, Beau, Biden said, "I feel self-conscious talking about (the loss) ... there are so many people going through this. Think of all the people you know who are going through horrible things ... the ability of people to absorb hurt and just get back up."

He is a man of faith, but one who appears neither pious nor condemning -- a combination that is rarely displayed in public by politicians.

His connection to his family is strong, as is his faith. Biden said his mother used to tell him, "Remember that nobody is better than you, but you are better than nobody. Everybody is equal."

It's the combination of faith, family, experience, humility, suffering and service that Biden appears to wear so honestly in his speech and in his expressions. That combination has helped him forge strong connections with people across the nation and create an aura of authenticity that is so real and compelling.

At the end of his show, Colbert spoke for at least one of his viewers when he concluded, "I just want to say that your experience and your example of suffering and service would be sorely missed in the race ... we'd all be very happy if you did run."

Come on, Joe. Make everyone happy.