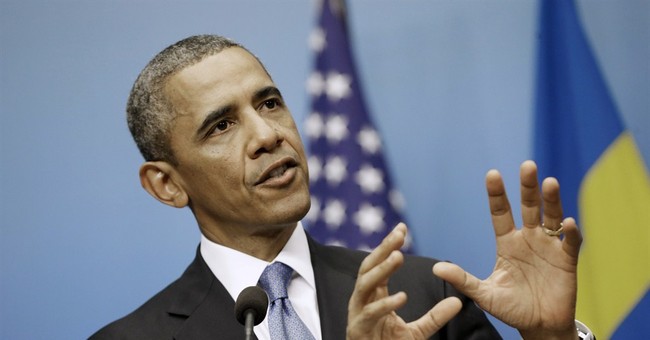 Good parents eventually learn that lines in the sand are useful only if enforced. Inevitably, red lines will be stepped on or, more often than not, jumped over. If the lines have no meaning, children will realize that their parents are full of bluster and either lack the ability or the determination to carry through with punishment.
Lines should be drawn only after deciding that the follow-through will happen without hesitation should a line be crossed. A swift, sure response is necessary, with no time for reconsideration or vacillation.
This is as true for business leaders, politicians and even world leaders as it is for parents. Words matter and should be chosen carefully.
Words matter, but only if those listening believe your words.
On Aug. 20, 2012, President Obama, responding to a question during a press briefing at the White House said, "I have indicated repeatedly that President al-Assad has lost legitimacy, that he needs to step down. So far, he hasn't gotten the message, and instead has double downed in violence on his own people.
"We cannot have a situation where chemical or biological weapons are falling into the hands of the wrong people. We have been very clear to the Assad regime, but also to other players on the ground, that a red line for us is we start seeing a whole bunch of chemical weapons moving around or being utilized. That would change my calculus. That would change my equation."
International politics is challenging, as there are always multiple players with multiple viewpoints, goals and options. Former U.N. Ambassador Jeane Kirkpatrick, under President Reagan, writing in her November 1979 essay "Dictatorships & Double Standards" in Commentary Magazine, laid out the evidence that the transitional period between an authoritarian government and its potential democratic replacement could result in chaos:
"Authority in traditional autocracies is transmitted through personal relations: from the ruler to his close associates (relatives, household members, personal friends) and from them to people to whom the associates are related by personal ties resembling their own relation to the ruler. The fabric off authority unravels quickly when the power and status of the man at the top are undermined or eliminated. ... Without him, the organized life of the society will collapse, like an arch from which the keystone has been removed. ...The speed with which armies collapse, bureaucracies abdicate, and social structures dissolve once the autocrat is removed frequently surprises American policymakers and journalists accustomed to public institutions based on universalistic norms rather than particularistic relations."
Kirkpatrick's point was that transitioning to democratic rule requires more than ousting an autocratic government; that the foundations of democracy are neither easily nor rapidly replicated, and, if they are not in place, any attempt to create democracies often proves short-lived. Why is this important in reviewing the options regarding Syria? The foundation of the Middle East differs from that of America in the 1700s. When we review foreign relations, we must step back and consider the multiple backgrounds, foundational structures and repercussions of our potential actions.
All of this should be done prior to drawing any red lines so that we maintain the ability to be flexible while projecting strength. Reagan was brilliant in this regard, defining his enemies with clarity: "Let us be aware that while they preach the supremacy of the state, declare its omnipotence over individual man, and predict its eventual domination of all peoples on the earth, they are the focus of evil in the modern world," he told the annual convention of the National Association of Evangelicals in March 1983.
This comment set up Reagan's speech in Berlin at the Brandenburg Gate in 1987 when he challenged Soviet leader Mikhail Gorbachev to "Tear down this wall." Eighteen months later the wall fell.
Wednesday of this week, Obama, while talking in Sweden, said that the red lines he had cited on Syria were not his alone but were shared by the international community. But the international community has not spoken with one voice, leaving his words confusing rather than clarifying.
The only way to prevent such a quagmire is to have a president who understand that words matter, that it is better to maintain flexibility while projecting strength, that red lines should rarely be drawn and -- if drawn -- should be drawn cleanly, clearly and with ownership.