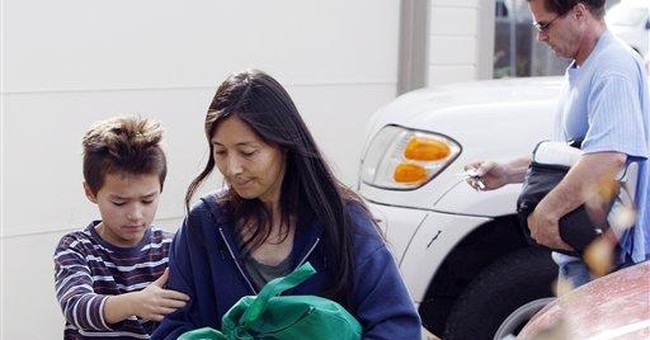 Last Thursday afternoon, my daughter's homework assignments included watching five minutes of the Weather Channel. As we turned on the television, a silver saucer-shaped balloon was floating across the screen -- an ambulance and fire trucks were racing after it. Like millions of other Americans, we were mesmerized. What was happening? Was there a boy inside? Would he be OK?

The balloon landed, and my two children and I guessed that there was no one inside. We were right.

It is too bad the balloon was silver instead of transparent -- we could have seen inside and realized that it was empty. That inside there was not a soul, only hot air.

Speculation abounded, but the real giveaway was when Falcon Heenes told CNN's Wolf Blitzer, "We did this for the show."

The family had been on the reality television show "Wife Swap," and Richard Heene, the father, had recently been pitching various reality show ideas, but to no avail.

It's hard to pitch a reality show when the activity is all staged. It makes it a show about a show and makes you wonder: What is reality in our current culture?

Earlier this month, a Ralph Lauren advertisement caused a hubbub when a poster for the Blue Label Jeans featuring model Filippa Hamilton showed her body so thin that her head looked bigger than her waist. Some claimed Photoshop overkill. The company acknowledged the fakery.

"For over 42 years, we have built a brand based on quality and integrity," said a Ralph Lauren spokesman. "After further investigation, we have learned that we are responsible for the poor imaging and retouching that resulted in a very distorted image of a woman's body. We have addressed the problem and going forward will take every precaution to ensure that the caliber of our artwork represents our brand appropriately."

It might be proper if, in addition to acknowledging and owning this particular image, they would also address going forward how to ensure their artwork represents what is authentic and real.

A difficult question in today's society: What is authentic and real.

Last Friday, I left town with six fourth-grade Girl Scouts in my car, following a friend who had five girls in her car. We joined 300 other Girl Scouts for a weekend of camping, activities and fun. On Saturday, I realized that I had forgotten to bring the Special Whatchamacallits Affectionately Pinned Somewhere (SWAPS) that the girls had made to trade with the other troops.

I knew I had to tell the troop members, face their tears and try to make amends. I let the camp coordinator, Carolyn, know that we would be missing the SWAP portion of the day. She offered half of her troop's SWAPs. Her offer brought tears to my eyes and reminded me what Girl Scouts teach -- how to help others.

She provides a great example for our Girl Scouts of helping people at all times.

Her actions were authentic and transparent.

"Transparency is critical," says Tara Jones, a Princeton, N.J., based performance psychologist, in "Propping up Employee Morale," an article by Lin Grensing-Pophal in H.R. Executive online. "Leaders need to put themselves out there, be honest and role model the behavior they wish to see in their people."

This is as true for brands and politicians as it is for business leaders and even reality TV wannabes.

What is reality, and what is a good story? Does it matter as long as the big picture is generally correct?

Real reality stars are not those who drive in fancy cars and drip with jewelry while cameras follow their every move. Real stars are the people who are role models every day without the fame, the fortune or the paparazzi.

I know what reality is when I feel it. It is grown children helping their elderly parents, husbands and wives raising children together, 300 Girl Scouts camping with their leaders, boys playing baseball, teachers challenging their students until they can read, friends helping friends, people volunteering their time and their money to help others -- because they want to help others.