Ilana Mercer
|
Posted: Mar 27, 2021 7:23 AM
Share   Tweet
The opinions expressed by columnists are their own and do not necessarily represent the views of Townhall.com. 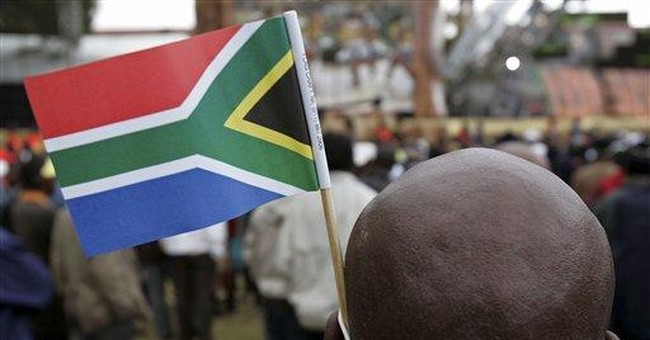 Perplexing as it may seem, American foreign policy has been informed less by what Samuel P. Huntington termed civilizational consciousness than by the idea of the propositional nation. America, to her governing neoconservative and left-liberal elites, is not a nation but a notion, a community of disparate peoples coalescing around an abstract, highly manipulable, state-sanctioned ideology. Democracy, for one.

Yet to Russell Kirk, the father of American conservatism, and an old-school conservative—as well as, arguably, to the founders of the nation themselves—society was a community of souls, joining the dead, the living, and those yet unborn. It cohered through what Aristotle called friendship and what Christians call love of neighbor, facilitated by a shared language, literature, history, habits and heroes.

These factors, taken together, constitute the glue that binds the nation.

By contrast, the rather flimsy whimsy that is the American “creedal nation” is, ostensibly, united in “a common commitment to a set of ideas and ideals.” If anything, when expressed by the historical majority, the natural affinity for one’s tribe—a connection to kith, kin and culture—is deemed inauthentic, xenophobic, and racist, unless asserted by non-Occidentals.

The disregard a country’s policy makers evince for the fellow-feelings stirred among countrymen by a common faith and customs—secular and sacred—is invariably reflected in its foreign policy.

America’s foreign policy looks at populations as interchangeable as long as they are “socialized in the same way” and, as paleoconservative thinker Paul Gottfried puts it, “molded by a suitable public administration and a steady diet of human-rights talk.” The generic American government’s foreign policy reflects America’s denationalized elites, who are committed to “transnational and sub-national identities” both at home and abroad.

According to her ruling sophisticates, America’s mission is to “democratize mankind.” To fulfill this mission, and to do justice to American exceptionalism, Americans are, as Pat Buchanan put it, “indoctrinated in a fabricated creed that teaches they are being untrue to themselves and faithless to their fathers unless they go abroad in search of monsters to destroy.” Or, welcome The World into their midst. We aren’t Americans, we are the world, we are lectured.

One such “monster” targeted for rapid reform was South Africa.

Cold War confrontation prompted the United States to acknowledge South Africa as a surrogate for American interests on the Dark Continent. In defense of these interests in the region and against the communization of their neighborhood, South African soldiers fought Russia’s Cuban and Angolan proxies with the same fortitude that the country’s founders displayed when battling the Zulus in the Battle of Blood River.

Yes, South Africa had faithfully fulfilled its role as a Cold Warrior. It fought alongside other advanced Western nations, led by the United States, and “engaged in a pervasive ideological, political, economic, and, at times, military conflict with [other groups] of somewhat poorer, communist societies led by the Soviet Union.”

A surplus of courage, however, was no panacea for a deficit in democracy.

Thus, although South Africa was regarded as “an important Western geostrategic bulwark” against Soviet encroachment in the region, the American reservoir of good will toward South Africa was quick to run dry. It’s not that the US did not have democratically flawed allies; it did and does. But such imperfections are usually the prerogative of non-Western nations. China, for instance.

For South Africa this meant fighting communism’s agents while being handicapped by sanctions. “The United States had imposed an arms embargo on Pretoria in 1964 and had joined the international consensus in refusing to recognize the ‘independence’ of four of South Africa’s black homelands between 1976 and 1984.”

While during the 1970s and the 1980s all American administrations condemned apartheid, they had generally opposed broad economic sanctions, arguing reasonably that these would hurt the very population they were intended to help. With the Carter administration (1977-81) came an even “tougher line toward Pretoria.” Jimmy Carter viewed black African nationalism as perfectly “compatible with US interests.”

In fairness, the left turn in American foreign policy came well before Carter.

America’s support for Soviet satellites such as the African National Congress was likely a hangover from Yalta; a long-standing official policy of support for the Soviet alliance, and the subsequent ceding of most of Central and Eastern Europe to Stalin?

The shift in American foreign policy ironically saw the US adopt and deploy slogans popularized by the Soviet Union in support of African liberation and against the “imperial, colonial” West.

There was a “pullback of military forces around the communist periphery” and the “frequent support of the Third World in disputes with Western nations” around the world. Thus, left-wing revolutionaries were propped up, instead of a Western ally like Salazar in Portugal; Mugabe was favored over Ian Smith, as was Nasser above Britain and France; Batista was ousted to make way for Castro.

Republicans Too Radical For Ronald Reagan

Ronald Reagan at least favored “constructive engagement” with South Africa, together with a tough resistance to communist advances in the Third World. But political pressure, not least from the Republican majority, mounted for an increasingly punitive stance toward Pretoria. This entailed an “elaborate sanctions structure,” disinvestment, and a prohibition on sharing intelligence with the South Africans.

In 1986, the Soviet Union, which had until the 1980s supported a revolutionary takeover of white-ruled South Africa by its ANC protégés, suddenly changed its tune and denounced the idea. Once again, the US and the USSR were on the same side—that of “a negotiated settlement between Pretoria and its opponents.”

For advocating “constructive engagement,” members of his Republican Party issued a coruscating attack on Reagan. Senator Lowell P. Weicker Jr., in particular, stated: “For this moment, at least, the President has become an irrelevancy to the ideals, heartfelt and spoken, of America.”

Republicans had slipped between the sheets with the fashionable left. What’s new?

For sustainable change to take place, change must be gradual and “rooted in the institutions of society.” In tracing the contours of such Burkean thinking, Kirk referred to “that aspect … which is prepared to tolerate an old evil lest the cure prove worse than the disease.”

To Kirk’s contention that “true freedom can be found only within the framework of a social order,” I’d wager that in my former homeland, South Africa, this bulwark against barbarism has collapsed. In my new homeland, America, the framework that sustains the country’s ordered liberty is so rapidly being eroded, so as to be near collapse.

Decades back, no less a classical liberal thinker than Ludwig von Mises warned that liberty in the United States could not—and would not—endure unless the founding nation retained its historic national identity and cultural hegemony.

An ahistoric, rootless America, shot through with dangerous and systemic, anti-white animus, is an America in which liberty has been lost.

(Citations are in “Into The Cannibal’s Pot: Lessons For America From Post-Apartheid South Africa” by ilana mercer)