Ilana Mercer
|
Posted: Dec 14, 2018 9:44 AM
Share   Tweet
The opinions expressed by columnists are their own and do not necessarily represent the views of Townhall.com. 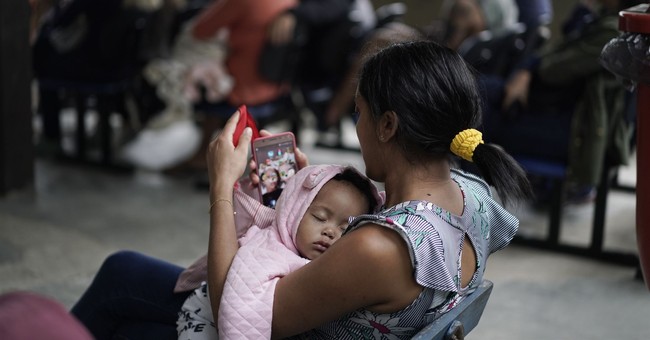 The Centers for Disease Control and Prevention (CDC) used to trace outbreaks to Patient Zero, the index case—the first patient to get, then transmit, a disease. Is this government agency doing due diligence in the cases of the polio-like paralysis infecting hundreds of America’s kids?

By the dictionary’s telling, epidemiology is “the branch of medicine that deals with the study of the causes, distribution, and control of disease in populations.”

By WND’s telling, “the diagnosis of the first cases of AFM, acute flaccid myelitis, in 2014,” coincided with the dispersal of thousands of Central American children among U.S. school children. More conspicuous at that time “was an outbreak of a deadly respiratory illness” that put hundreds of America’s children in intensive care. “Both types of symptoms can probably be caused by enterovirus D68, which happens to be endemic in Central America,” opines Dr. Jane Orient.

Are the state’s epidemiologists—whose job it is to trace and terminate outbreaks of contagious diseases—following these connections?

An outbreak necessitates the tracing of “Patient Zero,” the “single individual who bears the unknowing responsibility for having introduced the disease” to a certain population.

The same taxpayer-funded medical sleuths impressively tracked down the index case in the AIDS epidemic in North America. As documented in the late Randy Shilts’ And the Band Played On, he was Gaetan Dugas, a dashing, promiscuous, Canadian flight attendant, who had had approximately 1,000 sexual partners.

Although the CDC has provided a perfunctory status-update of its AFM Investigation, the  agency’s mention of a possible genetic etiology for Poliomyelitis, a dreadful, highly infectious viral disease, is bizarre. It reads like a cop-out.

What next? Like the legendary Lancet has done, can we expect the CDC to diagnose “right-wing politics” with folly and fervency for daring to correlate “migration to infection”?

Lest you worried that “the nation’s health protection agency” was putting America First, the CDC boasts of making strides, between January 2017 and September 2018, “Toward Poliomyelitis Eradication”—in Pakistan. (I guess CDC could argue that lots of Pakistanis will end up in the U.S., “looking for a better life.”)

In any event, along for the ride with the thousands of migrants poised to pour into the U.S. from Central America is a healthy array of microbes: measles, Chagas disease, hepatitis and much more.

According to Tijuana's Health Department, via Fox News, 60 percent of the migrants currently encamped on the U.S. border carry respiratory infections. There are, moreover, confirmed cases of tuberculosis, HIV/AIDS, chickenpox, and skin infections galore, in addition to lice—these “serve as vectors of diseases like typhus.”

Stateside, “public health experts across the Southwest have documented rises in drug-resistant TB and dengue fever. In June,” says investigative journalist Michelle Malkin, “Australian public health researchers reported that ‘scabies, long considered a disease of the past in the developed world,’ is back. The scientists fingered “mass global migration as a leading factor, noting scabies outbreaks among refugees to the European Union and along America’s southern border.”

First in the liberty community to decry the health hazards from the unfettered flow of migrants across the 1,940-mile-long border with Mexico was dazzling Randian scholar and patriot, Madeleine Pelner Cosman, Ph.D., Esq.

Coupled with her health-care policy expertise, Dr. Cosman was an avid outdoorsman and marksman who regularly volunteered to patrol the border with the San Diego County Sheriff's agents.

In a 2005, Journal of American Physicians and Surgeons paper, "Illegal Aliens and American Medicine," Cosman addressed the effects on the U.S. health system of the bleeding Southwestern border:

"TB was virtually absent in Virginia until in 2002, when it spiked a 17 percent increase, but Prince William County, just south of Washington, D.C., had a much larger rise of 188 percent. Public health officials blamed immigrants. In 2001 the Indiana School of Medicine studied an outbreak of MDR-TB, and traced it to Mexican illegal aliens. The Queens, New York, health department attributed 81 percent of new TB cases in 2001 to immigrants. The Centers for Disease Control and Prevention ascribed 42 percent of all new TB cases to foreign born people who have up to eight times higher incidence. Apparently, 66 percent of all TB cases coming to America originate in Mexico, the Philippines, and Vietnam."

Chagas, cautioned Cosman, is yet another dread disease that has been imported from Latin America and has infiltrated America's blood supply. "Chagas affects blood transfusions and transplanted organs. No cure exists. Hundreds of blood recipients may be silently infected. After 10 to 20 years, up to 30 percent will die when their hearts or intestines, enlarged and weakened by Chagas, burst."

Thousands of cases of leprosy over the past few decades may seem negligible, but having been eradicated in the U.S, "leprosy, a scourge in Biblical days and in medieval Europe," is back. By the reluctant admission of the New York Times, it was brought over from Asia and Latin America.

Other diseases with similar origins and vectors of transmission are dengue fever, polio, malaria, Kawasaki disease, intestinal parasites, and the ghastly brain worm, cysticercosis, which, “in the U.S, is an imported disease … found in immigrants from Mexico, Central and South America."

To qualify for lawful permanent residency, this legal immigrant, now a citizen of the United States, was screened thoroughly for communicable diseases. The American government knows of every relevant antigen and antibody that courses through my veins.

Whether they’re armed with bombs or bacteria, stopping weaponized invaders from harming Americans falls within the purview of the U.S. government. The CDC swanks that it’s “working 24/7 to protect America from health and safety threats, both foreign and domestic.” Is it?