Humberto Fontova
|
Posted: Sep 12, 2020 12:01 AM
Share   Tweet
The opinions expressed by columnists are their own and do not necessarily represent the views of Townhall.com. 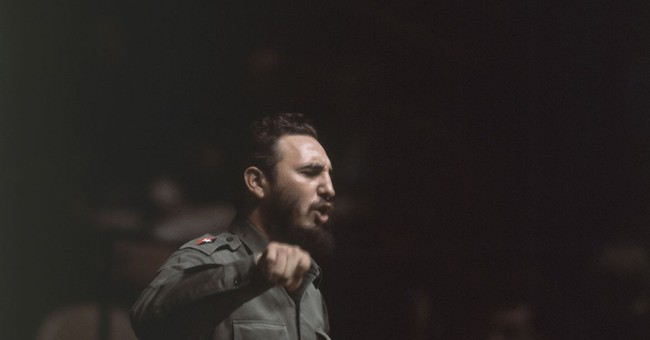 “Horror is the right word…among people in the national security complex there is a sense of horror about the way he (President Trump) acts, behaves and talks. So I fully expect much more reporting to come out on this.” (Jeffrey Goldberg, CNN, September 6.)

“I was also anxious to meet the great man…a close reading of the human rights literature suggests to me that the leadership of Cuba is not morally comparable to the leadership of Zimbabwe, Burma, Iran, Syria, Libya, North Korea, Eritrea, Venezuela….I judge his (Fidel Castro’s) revolution against what it replaced, namely, the thugocracy of Batista, who was a friend only to a handful of oligarchs and American mafia leaders,” (Jeffrey Goldberg, after a red-carpet visit to interview Fidel Castro in Cuba, September 10, 2010.)

After bestowing him with lengthy and exclusive interviews, Fidel Castro—who jailed, tortured and/or exiled every genuine journalist in Cuba in the process of outlawing a free press—seemed elated when he read the resulting articles penned by Jeffrey Goldberg. Needless to add, Goldberg had been thoroughly vetted by Castro’s KGB-trained intelligence before being allowed to set foot in his totalitarian fiefdom.

But even with all this advance work, Castro seemed surprised and delighted by how ideally Goldberg’s publishings matched his own Stalinist, terror-sponsoring regime’s propaganda agenda. In fact, Jeffrey Goldberg and Fidel Castro formed a veritable mutual-adoration society, with Castro often publishing love songs to Goldberg in his own captive (literally!) media, where he described Goldberg as an “expert” and as an “important and indefatigable” journalist.

Heaven knows it wasn’t often that Fidel Castro yielded (publicly, at least) to the “expertise” and “indefatigability” of others. But he made an exception for a few of his most shameless apple-polishers. One of these was The Atlantic editor Jeffrey Goldberg, whose own apples Fidel Castro gratefully polished in return, with laudatory articles in his captive (literally!) media.

Again, here’s Goldberg’s rationalizations for his Cuba visit: “a close reading of the human rights literature suggests the leadership of Cuba is not morally comparable to the leadership of Zimbabwe, Burma, Iran, Syria, Libya, North Korea, Eritrea, Venezuela.”

Perhaps a closer reading might help. In his book Against All Hope, Armando Valladares, who suffered 22 years in Castro’s dungeons, forced-labor camps, and torture chambers, then was appointed by President Reagan as U.S. ambassador to the U.N. Human Rights Commission, reveals how at one point in 1961, Castro’s Gulag held 350,000 political prisoners. Freedom House estimates that half a million Cubans have passed through Castro’s Gulag. That’s out of a Cuban population at the time of 6.4 million.

In her book Gulag, Anne Applebaum estimates that at any one time, about 2 million people were incarcerated in Stalin’s Gulag. That was out of a Soviet population of about 220 million.

Now punch your calculator…see, Mr. Goldberg? Turns out that calling Castro a “Stalinist” almost lowballs his repression. Castro and Che Guevara jailed and tortured Cubans at a rate similar to (Che Guevara’s idol) Stalin’s jailings and torture of his subjects.

"The Black Book of Communism,” written by French scholars and published in English by Harvard University Press (neither an outpost of the vast right-wing conspiracy, much less of “Cuban-exiles-with-an-ax-to-grind”) estimates that Castro’s regime murdered around 17,000 Cubans by firing squad mostly during the '60s. Again, Cuba was a nation of 6.5 million in those years. Given the U.S. population, a proportionate bloodbath would reach almost 1 million firing squad murders.

Many opponents of the Cuban regime qualify as the longest-suffering political prisoners in modern history, having suffered prison camps, forced labor and torture chambers for a period three times as long in “The Great Man’s” Gulag as Alexander Solzhenitsyn suffered in Stalin’s Gulag.

“I judge his (Fidel Castro’s) revolution against what it replaced,” sniffed Goldberg in his rationalization, “namely, the thugocracy of Batista, who was a friend only to a handful of oligarchs and American mafia leaders.”

Granted, The Godfather II is a superb film. But better educational sources on pre-Castro Cuba do exist. In fact Goldberg’s “friend of oligarchs” was a mulatto grandson of slaves born on the dirt floor of a palm roofed shack in the Cuban countryside. Cuba’s oligarchy in fact denied Fulgencio Batista admittance into their Havana Yacht Club and largely bankrolled his violent overthrow. From Cuba’s richest man, sugar magnate Julio Lobo, to Pepin Bosch of the Bacardi dynasty, and hundreds of oligarchs in-between, Castro’s July 26 movement was funded by the very people the learned Mr. Goldberg claims were Batista’s “friends.”

“Many of the poorest Cubans under Batista, which is to say, most Cubans, appreciated (Castro’s health-care and educational) innovations,” Goldberg further rationalized in one of his articles.

In fact, Cuba’s per-capita income in 1958 was higher than half of Europe’s. “One feature of the Cuban social structure is a large middle class,” begins a UNESCO study of Cuba from 1957. “Cuban workers are more unionized (proportional to the population) than U.S. workers. The average wage for an eight-hour day in Cuba in 1957 was higher than for workers in Belgium, Denmark, France, and Germany. According to the Geneva-based International Labor Organization, the average daily wage for a unionized Cuban agricultural worker in 1957 was also among the highest in the world.”

Most tellingly, in the '40s and '50s when Cubans could get U.S. visas for the asking and Cubans were perfectly free to emigrate with all their property and family, fewer Cubans lived in the U.S. than did Americans in Cuba, and Cuba was inundated with immigrants from Europe.

Two of the Castro-media reprints of Goldberg articles feature Goldberg assuring The Atlantic readers that Castro’s Cuba is antiseptically free of terror-sponsorship, and should be removed from the State Department’s terror-sponsor list posthaste. Another assures The Atlantic readers that Castro’s Cuba had absolutely nothing to do with JFK’s assassination.

And how did Jeffrey Goldberg, this hard-nosed and “indefatigable” investigative journalist, learn that Castro’s Cuba was antiseptically free of any connection with the crimes above? Goldberg’s “blockbuster revelations” of Castroite innocence, after all, were published in The Atlantic, which boasts on its very website that they:

“Look for TRUTH rather than for a story. We know great storytelling is part of great journalism. But HONEST reporting and analysis, and the INTEGRITY they represent, are what matter most to us, even if their pursuit requires giving up on an alluring narrative.”

So again, how did Jeffrey Goldberg unearth the purity of Fidel Castro’s heart and his utter innocence in terrorism and assassination?

Well, Fidel Castro told him so (cross-my-heart-and-hope-to-die!) And, apparently, that settled that!

If some of the above sounds outrageous even by the standards of the Fake News Media, I invite you to check the thorough documentation graciously provided in these links.