When Democrats and the CIA Sneered at (Genuine) Whistleblowers

Humberto Fontova
|
Posted: Oct 19, 2019 12:01 AM
Share   Tweet
The opinions expressed by columnists are their own and do not necessarily represent the views of Townhall.com. 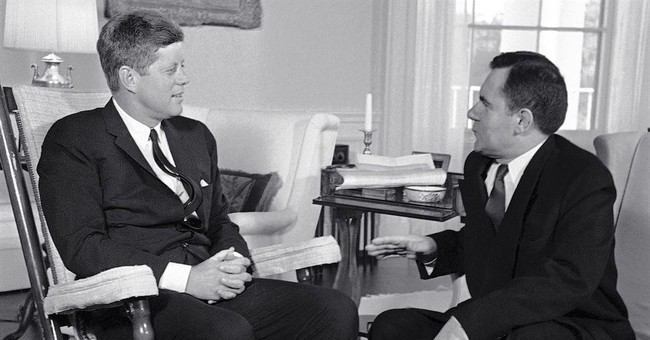 [These missiles in Cuba are] “nothing but refugee rumors. Nothing in Cuba presents a threat to the United States. There’s no likelihood that the Soviets or Cubans would try and install an offensive capability in Cuba," said a sneering National Security Advisor, McGeorge Bundy, on ABC’s Issues and Answers, Oct. 14, 1962.

“There’s fifty-odd-thousand Cuban refugees in this country, all living for the day when we go to war with Cuba. They’re the ones putting out this kind of stuff (about missiles),” said a sneering President John F. Kennedy on Oct. 15th, 1962.

“The USSR could derive considerable military advantage from the establishment of medium and intermediate range ballistic missiles in Cuba. But this would be incompatible with Soviet practice to date and with Soviet policy as we presently estimate it," noted a CIA report, Sept 19, 1962.

(All quotes above meticulously documented in this internationally-acclaimed book)

For months prior to Kennedy and Bundy’s sneering against the Cuban missile-mongers, dozens of young Cuban exiles had been risking their lives by infiltrating Cuba and bringing out eyewitness reports of what remains the biggest military threat to the U.S. in its history. In the process, some of these Cuban boys were also dying by firing squad and torture at the hands of Castro and Che Guevara’s KGB-tutored secret police.

Outrageously, many of these young Cubans had been working for the CIA itself when they infiltrated Cuba at enormous risk to their lives. But their eye-witness reports of missiles were pooh-poohed by the CIA’s mostly Ivy-League-pedigreed and Washington-based “suits.” After all, these Cubans had an “axe-to-grind.” So their reports were no more credible to the CIA’s ultra-educated and ultra-sophisticated Washington-based “analysts” than the ones from other deplorable “axe-grinding” Cubans a few years earlier. To wit:

“The Cuban SIM (Servicio de Inteligencia Militar) report is nothing more than a summary of allegations made against Fidel Castro…this summary has been slanted in an effort to make Castro a “Rojo” (Red) but the result is a rather poor one...Castro is definitely not a communist … the U.S. should not be taken in by President Fulgencio Batista’s attempt to label the revolutionary movement as communist inspired, dominated or influenced.”  -CIA report from Havana station, Nov. 1958.

At any rate, exactly 24 hours after President Kennedy’s sneer against those deplorable “rumor-mongering” Cuban exiles, U-2 photos sat on his desk showing those "refugee rumors," pointed directly at Bundy, JFK, and their entire staff of Ivy League-credentialed national security wizards.

“OK, Humberto,” some amigos retort. “But then JFK quickly took the bull by the horns! He showed those Russkies who was boss! He stood up to them and Khrushchev retreated with his tail between his legs! That’s what Democrats used to do!”

"We ended up getting exactly what we'd wanted all along," snickered Nikita Khrushchev in his diaries, “security for Fidel Castro’s regime and American missiles removed from Turkey and Italy. Until today the U.S. has complied with her promise not to interfere with Castro and not to allow anyone else to interfere with Castro. After Kennedy's death, his successor Lyndon Johnson assured us that he would keep the promise not to invade Cuba."

In fact Khrushchev prepared to yank the missiles before any “bullying” by Kennedy. “What!” Khrushchev gasped on Oct. 28th 1962, as recalled by his son Sergei. “Is he (Fidel Castro) proposing that we start a nuclear war? But that is insane!...Remove them (our missiles) as soon as possible! Before it’s too late. Before something terrible happens!” commanded the Soviet premier.

The genuine threat came --not from Moscow—but from the Castros and Che. “If the missiles had remained, we would have fired them against the very heart of the U.S., including New York. The victory of socialism is well worth millions of atomic victims.” (Che Guevara, Nov. 1962.)

In fact, here was the consensus at the time from America’s military chiefs and most prominent Republicans:

“We missed the big boat,” (Gen. Maxwell Taylor, Chairman of the Joint Chiefs of Staff.)

“We’ve been had!” (Navy Chief of Staff George Anderson.)

"It’s a public relations fable that Khrushchev quailed before Kennedy. The Kennedy-Khrushchev deal was a deplorable error resulting in political havoc and human suffering through the America’s.” -Gen. Alexander Haig

“We locked Castro’s communism into Latin America and threw away the key to its removal!” -Barry Goldwater

“Kennedy pulled defeat out of the jaws of victory and gave the Soviets squatter’s rights in our backyard!” -Richard Nixon.

(All quotes above meticulously documented here.)

It's a tribute to the power of Castroite mythology that, even with all this information a matter of public record for almost half a century the academic/Fake News Media mantra (gloat, actually) still has Castro, "defying ten U.S. Presidents!"

Can we talk? Instead, he’d been protected by them.