Humberto Fontova
|
Posted: Jun 08, 2019 12:01 AM
Share   Tweet
The opinions expressed by columnists are their own and do not necessarily represent the views of Townhall.com. 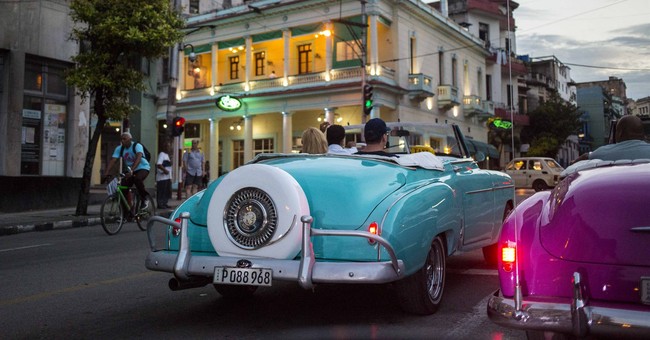 “If Cuban troops and militia do not immediately cease military and other operations for the purpose of causing death and destruction to the constitution of Venezuela, a full and complete embargo, together with highest-level sanctions, will be placed on the island of Cuba,” (President Trump, April 30, 2019.)

“Trump administration bans cruises to Cuba in clampdown on U.S. travel-– The Trump administration on Tuesday imposed heavy new restrictions on travel to Cuba by U.S. citizens, including a ban on cruises, in a bid to further pressure the Communist island.” (Reuters, June 4, 2019.)

As is often documented hereabouts, Castro’s military and secret police (the only people in Cuba with guns, in case some have forgotten) majority-own everything related to Cuba’s tourism industry, which is the Castro-Crime –Syndicate’s second largest source of income, slightly behind what they extort and otherwise squeeze out of their miserable Venezuelan colony in stolen oil and drug-smuggling proceeds.

Any more questions about why the Trump team decided to attend to this travel matter? (i.e. to once again make good on a threat to a foreign adversary?)

But wasn’t Obama’s Cuba policy of forgiving The Castro-Crime-Syndicate’s mass theft of U.S. property, its torture and murder of U.S. citizens, its blatant terror-sponsorship and drug-smuggling while showering it with $billions of U.S. dollars–wasn’t this shrewd policy guaranteed to turn Cuba into a Spanish-speaking Switzerland? Well:

“Cuba continues to play a destabilizing role in the Western Hemisphere, providing a communist foothold in the region and propping up U.S. adversaries in places like Venezuela and Nicaragua by fomenting instability, undermining the rule of law, and suppressing democratic processes. This administration has made a strategic decision to reverse the loosening of sanctions and other restrictions on the Cuban regime. These actions will help to keep U.S. dollars out of the hands of Cuban military, intelligence, and security services.” (Treasury Secretary Steven Mnuchin.)

Some perspective: in 2017, Cuba received 1.5 million visitors from the U.S. Given a big spike in recent cruise ship landings, that figure was expected to balloon in 2019, and the Castro-Crime-Syndicate was rubbing its hands and whooping in anticipation of this Obama-generated financial windfall.

Those delighted whoops have now turned to wails of anger and grief.

But wasn’t Cuba historically a tourist playground for Americans, some might ask? Sure. But here’s some more perspective:

When travel to Cuba was promoted by the U.S. government and Cuba served as a “tourist playground” for Americans (the 1950s), the island annually received around 200,000 tourists from the U.S.  In fact, up until 1953, more Cubans had vacationed in the U.S. annually than did Americans in Cuba, as befit a developed nation with a larger middle-class than much of Europe of the time.

But, as mentioned, on a year (2017) when tourism to Cuba from the U.S. was outlawed by congressionally-passed and presidentially-signed laws the island annually received upwards of ONE AND A HALF MILLION tourists from the U.S.

Sounds crazy, I know. But here it is straight from the U.S. State Dept. “Tourist travel to Cuba is prohibited under U.S. law for U.S. citizens, permanent residents, and others subject to U.S. jurisdiction.”

Obviously there was something drastically wrong with that picture--with such a flagrant scoffing at U.S. law. Any more questions why the Trump team decided to attend to this travel matter? (i.e. to once again make good on a threat to a snickering foreign adversary who --catastrophically as it turned out!--thought he was still dealing with Obama?)

What happened recently is that, though U.S. tourism to Cuba remained technically illegal according to U.S. law, Obama had opened up so many loopholes that Americans became second only to Canadians as vacationers in Cuba (i.e. as financial partners with the Stalinist, terror-sponsoring regime’s military and secret-police.)

“A, B, C--easy as one, two, three,” goes the famous song. And just as easily predicted by all “Right-Wing-Cuban-American-Crackpots” (i.e. people who thoroughly understand Castroism from firsthand experience)—just like the song: A.) Obama’s executive orders further enriched the Stalinist regime B.) who thus became fat and happy C.) unleashed a wave of terror on their subjects (both Cuban and Venezuelan) unlike anything seen in decades.

This (eminently predictable) Castroite wave of terror was verified even by leftist watchdog groups like Amnesty international.

As Obama implemented his Cuba “opening” (to cheers from libertarians) your humble servant went blue in the face trying to explain the horrible--but eminently predictable--consequence to some libertarians on John Stossel’s show.

In fact, contrary to all the media blather about Raul Castro and his successor’s (i.e puppet’s) Diaz-Canel’s “reforms,” Cuba hasn’t budged a millimeter from its spot in the Heritage Economic Freedom list. It still maintains its proud historic ranking of almost dead last, next to its partner in Stalinism North Korea.

And regarding all the Fake News Media blather about Cuba’s “new and burgeoning private sector!” and how it’s now employing a hefty chunk of Cuba’s working population! And how Trump’s “clamp-down” (i.e enforcement of U.S. law) will “hurt Cuba’s private sector hardest!”— some of us actually bothered to run the numbers.

In the process, your humble servant revealed that-- as a percentage of the Cuban population-- the number of Cubans currently “self-employed” in Cuba is about the same as were similarly employed when fanatical Maoist/Stalinist Che Guevara served as Cuba’s “Minister of the Economy.”

Hence, yet another Fake News Media lie about Cuba bites the dust.