Humberto Fontova
|
Posted: May 11, 2019 12:01 AM
Share   Tweet
The opinions expressed by columnists are their own and do not necessarily represent the views of Townhall.com. 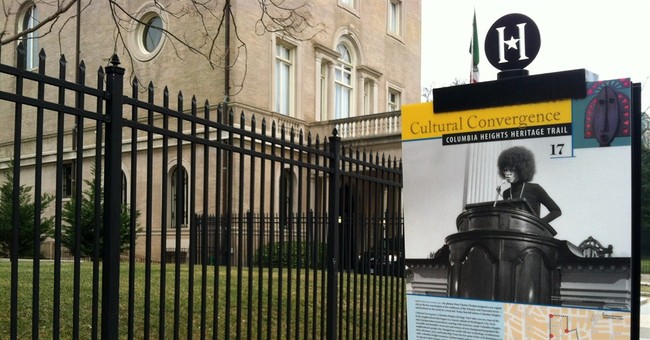 “One of my idols!…I can’t tell you how enormously inspiring you (lifelong Stalinist Angela Davis) have been to me throughout my life…We collectively must make sure that we are dismantling all systems of oppression…we’re the party of love, the party of compassion.” (Ilhan Omar expressing her lifelong adoration for Angela Davis, lifelong devotee of a system that conquered, enslaved, tortured and murdered many more human beings than Hitler’s Nazis.)

“It is about time that we stepped up to defend those who represent our political vision (i.e. Ilhan Omar) on the front lines of struggle. I feel particularly motivated to join this amazing group.” (Lifelong Stalinist and former FBI most-wanted terrorist Angela Davis at a Black Women in Defense of Ilhan Omar rally last week in Washington D.C.)

The rally by black women in defense of a black woman was put together by a black woman who devoted much of her life to championing the jailer and torturer of the most black and women political prisoners in the modern history of the Western Hemisphere. A specialty of the regime championed by the black woman who organized Black Women in Defense of Ilhan Omar is torturing and jailing women who are black.

Angela Davis, though a '60s radical icon with songs penned in her honor by John Lennon and by the Rolling Stones (“Sweet Black Angel”) is no hippy dippy, brain-fried dingbat or flaky fellow traveler. As mentioned, she’s a lifelong, diehard Stalinist who twice ran for U.S. vice president on the official Communist Party ticket. For decades she was a gen-you-wine “card-carrying commie,” in other words.

But back in the 1970s card-carrying commies didn’t inspire much support in U.S elections. Maybe nowadays Davis should regroup, and aim lower (congressional seat, for instance)—and seek inspiration from those who claim to be inspired by her; Ilhan Omar, for instance?

These women’s prison conditions were described by former Cuban political prisoner Maritza Lugo. “The punishment cells measure 3 feet wide by 6 feet long. The toilet consisted of an 8 inch hole in the ground through which cockroaches and rats enter, especially in cool temperatures the rat come inside to seek the warmth of our bodies and we were often bitten. The suicide rate among women prisoners was very high.”

“They started by beating us with twisted coils of electric cable,” recalls former political prisoner Ezperanza Pena from exile today. “I remember Teresita on the ground with all her lower ribs broken. Gladys had both her arms broken. Doris had her face cut up so badly from the beatings that when she tried to drink, water would pour out of her lacerated cheeks.”

“On Mother’s Day they allowed family visits,” recalls Manuela Calvo from exile today.” But as our mothers and sons and daughters were watching, we were beaten with rubber hoses and high-pressure hoses were turned on us, knocking all of us to the ground floor and rolling us around as the guards laughed and our loved-ones screamed helplessly.”

In 1962, a Cuban Catholic nun named Aida Rosa Perez was overheard whispering things about Fidel Castro and Che Guevara similar to those Ilham Omar and Rashida Tlaib routinely shout to the media about President Trump. Sister Rosa Perez was quickly rounded up at Soviet gun-point and sentenced to 12 years at hard labor by Angela Davis’ idols. Two years into her sentence, while toiling in the sun inside Castro’s Gulag and surrounded by leering guards, Sister Rosa collapsed from a heart attack.

The Cuban Archive project has fully documented many firing squad executions of Cuban women by the regime founded by Angela Davis’ idols. Over 200 women (and counting) have died from various beatings, brutalities and tortures while in Castroite Cuba’s prisons.

Oh…and speaking of Ilhan Omar. Last week she blamed “U.S. bullying” for Maduro’s mess and repression in Venezuela. “Ok—That’s it!” some in the media gasped, concluding she had finally stepped over the line and now faced “a backlash” for such obnoxious blame-America-first-ism.

Ridiculous, I say. In fact, in that regard (blame America first), she’s a classic Democrat. As exhibit A, here’s President John F. Kennedy (who many with short or no memories of him) claim was the last of the Democrat “cold-war patriot” presidents:

“I believe that there is no country in the world including any and all the countries under colonial domination, where economic colonization, humiliation and exploitation were worse than in Cuba, in part owing to my country’s policies during the Batista regime. I will even go further: to some extent it is as though Dictator Batista was the incarnation of a number of sins on the part of the United States. Now we shall have to pay for those sins.”

Kennedy wasn’t merely masochistic in that classically Democrat way; he was also spectacularly wrong. He was describing a nation (pre-Castro Cuba) with a higher per capita income than half of Europe, the 13th lowest infant-mortality on earth and a huge influx of (mostly European and even many U.S.) immigrants. Furthermore, in 1959 U.S. investments in Cuba accounted for only 14 percent of the island’s GNP, and. U.S. owned companies employed only 7 percent of Cuba’s workforce.

In fact, in 1953 more Cubans vacationed in the U.S. than did Americans in Cuba, that “U.S. tourist playground!” as the mythology claims. These tens of thousands of middle-class Cubans all voluntarily returned to (“impoverished exploited and humiliated!”) Cuba, despite the freedom at the time to emigrate from Cuba virtually at will and get U.S. visas virtually for the asking.